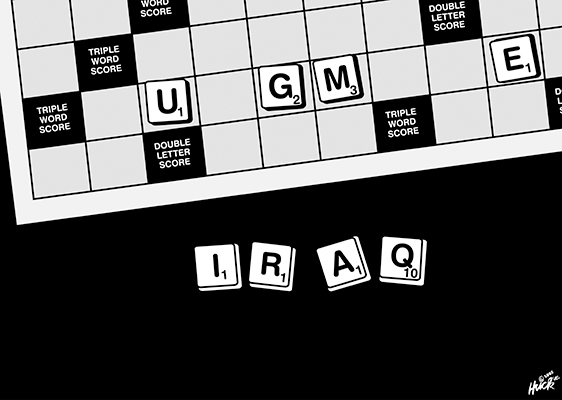 STATEMENT OF THE UE GENERAL OFFICERS

In September 2002, delegates to UE’s 67th National Convention discussed and adopted a resolution opposing President George W. Bush’s plans to invade Iraq. The resolution dismissed “Bush’s outlandish claims about the threat posed by Iraq to the rest of the world,”  and warned that “an invasion will inevitably be followed by a costly, years-long occupation, leaving large numbers of U.S. military personnel in a hostile environment.” It added, “An invasion of Iraq is not in the interest of workers.”

It is disheartening that now, nearly 12 years later and after the loss of so many lives and so much of our national treasury, we must again speak up against war in Iraq. This time we address a different president, one who was elected promising to end the U.S. war in Iraq. We reaffirm what UE has said since 2002. No U.S. troops, “advisors”, or military “contractors” should be in Iraq. There must be no more bombing and no more drone strikes.

George Bush ignored our objections, and those of millions of Americans, and on March 19, 2003 launched the invasion of Iraq. The following day UE’s officers issued a statement condemning the invasion and expressing concern for U.S. troops, in particular “the many members of UE families who have been called into service. Our earnest wish is for their safe and quick return.”

UE’s March 2003 statement continued: “This preemptive strike, an unprovoked attack on another country, seems more like the act of an empire than that of a democratic republic and is foreign to our democratic American values. In the months and years ahead, we need to question and debate how and why this happened – and demand a foreign policy consistent with the real interests of the vast majority of Americans.  It is not coincidental that U.S. troops are invading a country with enormous oil reserves, possibly equal to those of the U.S., Russia, China and Mexico combined. We reject and resent government policies that place the lives of working-class men and women at risk to further schemes of the corporate elite.”

Ten years after the invasion, the Costs of War Project of the Watson Institute for International Studies at Brown University concluded that the U.S. had spent $1.7 trillion on the war in Iraq, not including an additional $490 billion in benefits owed to war veterans and interest, expenses that it projected could grow to more than $6 trillion over the next four decades.

The same study found that the war had killed at least 134,000 Iraqi civilians and may have contributed to the deaths of as many as four times that number.  When security forces, insurgents, journalists and humanitarian workers are included, the war's death toll rose to an estimated 176,000 to 189,000, the study said.

Some 4,500 American troops lost their lives in the Iraq War, and the official count of U.S. wounded is 32,000. The real tally of wounded is probably much higher. The war did horrific damage to Iraqi society, created millions of refugees, destroyed infrastructure, healthcare and education, and left behind environmental contamination that has produced an epidemic of cancer and birth defects.

In addition, the invasion and the “divide and conquer” policies of the Bush administration stoked hostility among the ethnic and religious groups that make up Iraqi society, leading to armed sectarian conflict especially between Sunni Muslim and Shiite Muslim Iraqi Arabs. Neoconservative advocates of the war have offered the excuse that these are “age-old” hatreds. But there was no communal warfare between Iraqi Shiites and Sunnis before the U.S. invaded. The government of Prime Minister Nouri al-Maliki, in office since 2006, has been marked by both corruption and a heavily sectarian Shiite tilt which has deepened the alienation of Sunnis and the Kurdish ethnic minority in the North.

In recent weeks we’ve seen the consequences of these policies in the rapid military advances of a renewed Sunni insurgency which includes elements of Saddam Hussein’s former Iraqi army, and an extreme Sunni jihadist force, the Islamic State of Iraq and Syria (ISIS) which is also at war with the Assad regime in Syria. The current Iraqi army is in disarray, and entire units have thrown down their weapons and fled in chaos as Sunni insurgents advanced, leaving their U.S.-provided weapons to the insurgents. Increasingly the Maliki government is relying  for defense not on the army, but on sectarian Shiite militias. With Shiites allied with Iran and Sunni insurgents backed by the Sunni monarchies of the Gulf, there is danger now of not only a full-scale civil war in Iraq, but a sectarian conflagration across the entire region.

The Bush administration went to war in Iraq on the basis of lies. Those lies and the war have had disastrous consequences for the U.S. and Iraq. Yet there has been no official government investigation into how we got involved in Iraq and what went so terribly wrong. Now we’re paying the price for this lack of accountability. The architects of the U.S. war in Iraq, many of whom should probably be in jail, are instead appearing once again on TV and in the halls of Congress and the White House, arguing that the current mess is the result of the U.S. leaving Iraq too soon, and that the vast quantities of money and blood already poured down the drain require us to go in again.

Nothing good has come of the decade-long Iraq War, and nothing good will come of going to war again. The people of Iraq – Sunnis, Shiites, Christians, Kurds, Turkmens – must negotiate a power-sharing arrangement that promotes mutual respect and tolerance and the reconstruction of their country. There should be no U.S. role in those negotiations. Our government’s only role should be limited to providing humanitarian aid and helping pay for reconstruction, preferably forcing the corporations that profited from the war to foot the bill.

Can Iraq’s divisions be overcome? Iraq’s labor movement is itself evidence that they can, as U.S. Labor Against the War (USLAW) has pointed out. The Iraqi labor movement operates on the basis of non-sectarianism and mutual respect, and unions welcome workers as members regardless of religious, ethnic or cultural identity.  The unions of Iraq seek not only economic justice for their members, but a peaceful, democratic, non-sectarian, egalitarian, and prosperous Iraq for all its people.

We support these efforts of the Iraqi labor movement, and we oppose any further U.S. military involvement in Iraq.

Robert B. Kingsley, Director of Organization

TAKE ACTION: Sign U.S. Labor Against the War's online petition to President Obama. Click here to go to the petition.