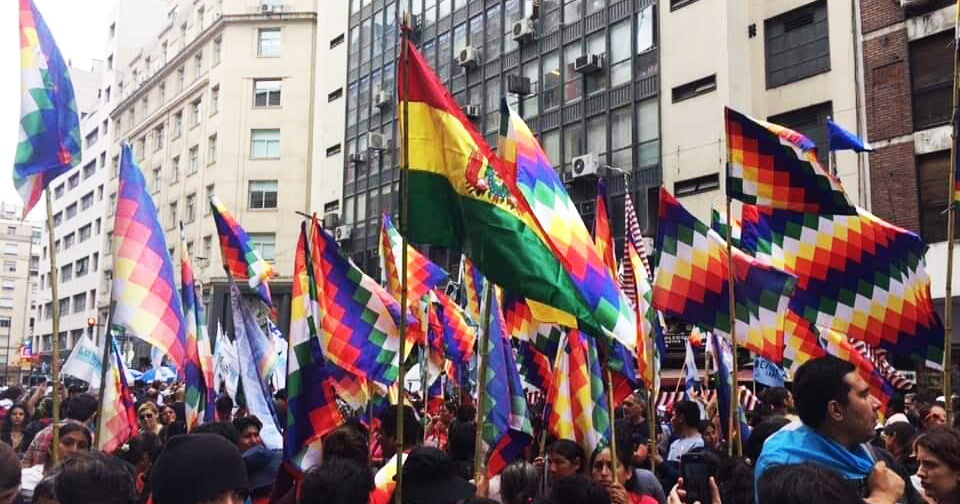 UE unequivocally condemns the removal of Bolivia’s elected president Evo Morales by the military on Sunday, and the violence carried out by the military and right-wing paramilitary forces against Indigenous people and political activists in that country. This coup is just the latest example of an attack on a progressive Latin American government by “big business forces supported by U.S. administrations”, as denounced by UE policy, attacks which have as their goal the fattening of corporate profits at the expense of the region’s workers and environment.

The global union federation IndustriALL, of which UE is a member, notes that “[s]ince the presidential elections in October, Bolivia's opposition forces have committed numerous acts of violence: they have looted and set fire to homes, humiliated democratically elected government officials, kidnapped and threatened those individuals’ families, set the house of the president's sister alight and stormed Evo Morales' own home.”

We agree with International Trade Union Confederation General Secretary Sharan Burrow that “No elected president should be forced out of office under military orders. That is not how democracy works. The fact that Morales has had to flee the country for fear of his life, cutting short his current term, highlights the undemocratic nature of what is happening in the country.”

Morales, who took office in 2006, has vastly improved living standards for working people in the poorest country in South America. The percentage of Bolivians living in poverty fell from 59.9 percent in 2006 to 34.6 percent in 2017, and the percentage of people living in extreme poverty was more than halved. According to a Washington Post article published shortly before the elections, “it’s indisputable that Bolivians are healthier, wealthier, better educated, living longer and more equal than at any time in this South American nation’s history.” Morales’ presidency has also been a point of pride for Indigenous Bolivians, who have long faced discrimination and racism.

Morales’s willingness to curb corporate power in order to improve the welfare of Bolivian citizens and reduce inequality has given international corporations plenty of incentive to support his removal. Most notably, Bolivia’s natural resources include over 40 percent of the world’s known reserves of lithium, and Morales recently cancelled a lithium-development agreement with a German corporation, with the apparent intent of renegotiating it to better benefit the local population or nationalizing the lithium industry entirely.

Morales clearly secured more votes than any other candidate in the October 20 elections; at issue was whether his margin of victory was at least ten percent, enough to avoid a runoff election. The latest returns — from more rural and poorer areas which were more supportive of Morales — pushed him over that margin, according to the official vote count. President Trump and Florida Senator Marco Rubio, both of them strident critics of Morales, seized on the differences between early and complete returns to declare the election results illegitimate. This was followed by a similar statement from the Organization of American States, which has a history of bending to U.S. pressure when assessing the legitimacy of elections whose outcomes the U.S. government does not like.

Despite these allegations, an exhaustive study of the results by the Center for Economic and Policy Research found “no evidence that irregularities or fraud affected the official result that gave President Evo Morales a first-round victory,” and the OAS produced no evidence to support its allegations. We agree with CEPR's Mark Weisbrot that it was irresponsible of Trump, Rubio and the OAS to issue these statements in the context of post-election violence in Bolivia.

Many in Bolivia, including some Bolivian unions, have real concerns about the Morales government. Morales’s November 11 offer to hold new elections offered a democratic path out of the crisis. His removal from office later that day by the military, the escalating violence against his supporters, and the recent assumption of the presidency by an openly racist anti-Morales senator — with two-thirds of her fellow senators absent because they feared for their safety — will only harm the working people of Bolivia.