Hundreds Rally at GE in Support of UE Local 332 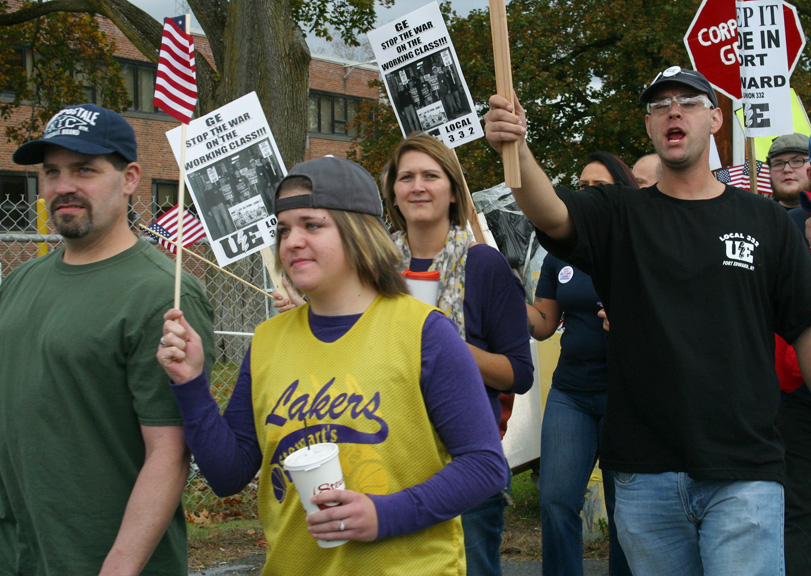 Exactly one month after GE announced its “intent” to close the Fort Edward capacitor plant, more than 300 people from dozens of unions and the local community rallied in support of UE Local 332’s fight to prevent the closing. The spirited mass picketing went on for two hours, culminating in a rally in which several union and community leaders spoke.

Locals from across the UE Northeast Region were present – 14 of them – as a result of the region hurriedly moving its fall regional meeting, originally planned for October 18 and 19 in New Hampshire, to nearby Glens Falls. Eight members from Local 506 made the six-hour drive from Erie, PA to support their fellow UE-GE workers. Another major GE local, Local 201 of the IUE-CWA in Lynn, Massachusetts, was represented by seven members including President Alex Brown. Area unions turned out in force, mobilized by the Albany Labor Federation, Troy Labor Council, Glens Falls Labor Council, and the Solidarity Committee of the Capital District.

But no one came a greater distance than the four members from FAT-represented cooperatives who had traveled from Mexico for a week of meeting with UE members in the Northeast who work in co-ops, and who participated in the demonstration. Enrique Lazcano, the FAT’s co-op coordinator, spoke at the rally.

Local 332 is currently engaged in “decision bargaining” with the company over its plans to close the plant. The company has been withholding information that the union needs to negotiate, and at the rally Gene Elk, who is assisting the local in bargaining, announced that the union had just filed unfair labor practice (ULP) charges against GE with the National Labor Relations Board for failure to provide information to which the union is entitled.

See more photos of the rally on UE's Facebook page here and here.

See news media coverage of the rally by clicking the following links for:

Click here to read "Acting With Impunity," an excellent analysis of the struggle at Fort Edward GE by Lawrence Wittner, retired history professor at the State University of New York at Albany.