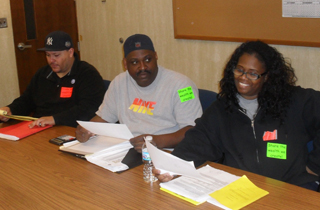 On July 13 UE members at Autoline Industries ratified a new three-year agreement that gives them some improvements, including pay raises, following a tough fight with the boss.

Union members at Autoline voted to affiliate their independent Universal Employees Union with UE in 2010 in the midst of an economic crisis in the auto industry.  The union became UE Local 735. Autoline workers manufacture car and truck jacks, brake pedals, and transmission cases. In 2010 negotiations, which began around the time the union was joining UE, the company demanded pay cuts of $4 an hour and reductions in every benefit. With over half the workforce on layoff, the local in a position to conduct a major fight, but pushed back against the company’s proposals and accepted some modest cuts.

This year expectations were different, and the local leadership and membership had done a great deal of planning. A committee of volunteers from each shift was organized and trained, and they became the voice of the union in the shop when the negotiating committee was busy battling the company across the bargaining table.  The company seemed to think it was 2010 all over again and still expected massive cuts in wages and benefits.

The volunteer committee distributed weekly bulletins in the plant, explaining the union’s positions on the issues and the company’s attacks. Members wore stickers addressing the issue of the week. On the Monday before contract expiration, the union conducted an informational gate meeting at lunch break. Two days later, members poured out of the plant shift change for a mass rally and march in front of the plant. At that event Local President Teresa Willibey denounced the company’s attack on wages and benefits and assured the membership that the union leadership did not intend to recommend any final package that did not provide improvements.

Some major obstacles were overcome because of the fight waged by the members.  Last year, Indiana’s Republican legislature and governor passed a so-called “right-to-work” law, taking away the right to negotiate a union shop clause in a labor agreement.  In the new agreement, Local 735 negotiated language saying that, if the courts strike down the “right-to-work” law or if the legislature repeals it, the old union shop provision will be reinstated to the contract.  The union gained the right to have 15 minutes, without interruption, to talk to newly-hired workers about the benefits of joining the union.

Another big struggle was over the issue of temporary workers. In the past, temporary workers had only been used as summer replacements to cover the vacations of regular employees. But by the time negotiations began, the plant’s workforce was made up of 40 percent temporary workers. Under the new agreement, after six months on the job a temporary worker will be hired as a regular worker and begin his/her regular probation period, or else be let go. The company also agreed to provide a smoke shack for smokers.

The new agreement will raise the average wage from $13.35 an hour to $14.10 at the end of three years, with a 25 cent increase each year. In an effort to eliminate the lower wage tier, the union added a provision that as each higher-tier employee retires, quits, or otherwise leaves employment, a worker from the lower tier will move up, by classification. The weekly short-ter disability amount was increased to $300 a week.  The attendance bonus was restored, and will be at $50 each quarter. The vacation schedule went back to running from July 1 through June 30. The company tried to eliminate all vacation over three weeks.  In the end, the fourth week was restored for all of those who had been entitled to it as of July 13, 2013. The one serious setback was in the area of health insurance as workers were forced at accept health savings accounts (HSA). It includes a high deductible, although the company will pay $250 of each worker’s annual deductible. The plan takes effect January 1, 2014, and the local has formed a special committee headed by Vice President Ken Jenkins to develop a plan to assist members well in advance.  The first meeting will be in September.