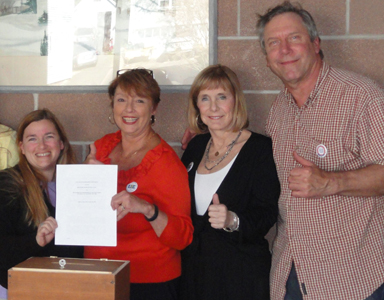 At the end of a difficult, nearly two-year battle with the Board of Education (BOE), Sub-local 88 of UE Local 222, the Branford paraprofessionals and lunch aides, negotiated their first union contract, which the members voted overwhelmingly to approve. With the BOE’s June 19 ratification the agreement went into effect.

The four-year contract provides that seniority will be used when determining layoffs and filling vacancies. Workers gained contract language that protects them from being disciplined without just cause. The union bargaining committee  worked hard to eliminate wage disparities, particularly among paras who had been working in the district for years, compared to neighboring school districts and within the Branford unit. This was a daunting task due to the size of the group (approximately 130 members) and the vast differences in wages among those with similar seniority.

The union committee’s relentless efforts brought significant wage gains for many members. Over the four years of the agreement, those with more than 10 years of service (who fell below an established wage rate) will gain a 19 percent in wage increases. Paraprofessionals more than three but less than 10 years of service will receive raises totaling 15 percent. Those with less than three years of service will gain 12 percent.  Lunch aides, who earned $10.58 at the start of negotiations, will see their hourly wages increase 70 cents in the first year, and approximately 43 cents in each of the succeeding years.  Wage increases will be retroactive to July 1, 2011. Karen Palluzi, one of the paraprofessionals, said, “The retro pay is really great! It’s wonderful to finally be acknowledged now that we have a union!”

Before they organized into UE, only those regularly working 30 hours or more received health insurance. In negotiations the union fought for health insurance for all employees working at least 20 hours a week, but was unable to achieve this goal in the first contract. The union did succeed in maintaining the health insurance with very few changes. Employees’s share of the insurance premium will not increase in years one and two, and will increase by only 1 percent in each of the final two years.

The contract also has language codifying the existing sick leave, and with an increase of one more sick day for all employees.  They also gained additional paid leave benefits, including include two paid holidays, one personal day, and paid union leave. These were important gains for workers who need their full weekly paychecks in order to live but who previously had only minimal paid sick leave.

Language in the new contract also protects wages, health insurance, evaluations, health and safety, terms of employment, non-discrimination, professional development, and union security. The union committee spent a lot of time negotiating an effective grievance procedure. The BOE wanted arbitration cases to be processed through the American Arbitration Association, which is quite costly. The union opposed this and was able to secure language saying that the parties will use the arbitration services of the Connecticut Board of Mediation and Arbitration.

When bargaining began, the union’s main goals were seniority protections, just cause language for discipline, and correcting wage disparities. They had no idea, at the beginning, how much resistance they’d encounter from the BOE. The bargaining committee fought diligently and kept the members informed and involved throughout the process, and in the end it paid off. Said negotiating committee member Loretta Ferrara, “We worked so hard! We would have liked to do even more. But this does provide a good foundation, and it is a great springboard for future contracts.” This sentiment was echoed by paraprofessional Robert Evans: “I am happy that we have representation. We now have a voice.”

The fight began in March 2011, when workers began to organize in order to be treated equally to other employees in the Town of Branford. Year after year, as “at-will” employees, paras and lunch aides had received far less in wage increases and worked under the constant threat of unjust terminations, with no job security or seniority rights.

Their efforts to unite to improve their situation led to a big victory on June 15, 2011, when they overwhelmingly won an election supervised by the Connecticut Board of Labor Relations, and they became a certified bargaining unit affiliated with the statewide public employee union UE Local 222.

But the BOE did not peacefully accept that outcome. Shortly after the union’s election victory, the schools terminated four paraprofessionals, three of whom played an active role in the organizing campaign. All had significant seniority, one had worked as a certified teacher for over 30 years, and two had degrees in education.

After unsuccessful attempts to resolve the terminations informally, the union filed an unfair labor practice with the State Board of Labor Relations. Informal hearings were held between the parties and the labor board also failed to bring a resolution, and after some initial reluctance, the labor board scheduled a full formal hearing.  At a pre-trial hearing on December 6, 2011, the BOE finally began to realize that it was on weak legal ground, and by the end of the day a settlement had been reached that resulted in the reinstatement of all four paraprofessionals with back pay.

For the members and leaders of the bargaining unit, this was a victory as significant as winning the organizing election five months earlier. After years of putting up with whatever the BOE did and having no way to resist, they had stood up to their employer, as organized workers, and won! As President Pam Van Winkle said the following day, “It was so much fun going into work today! I truly felt like Norma Rae! Everyone kept coming up to me, thanking me for getting the union in- and joining UE, and for all of our efforts. It was such a great day!”