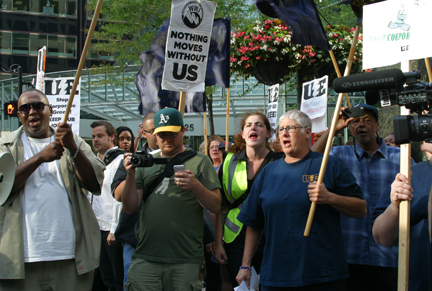 Management of GE, Walmart and McDonald's got a taste of UE miliance as delegates protested low-wage labor policies.
September 13, 2013
Chicago

UE’s 73rd National Convention, held August 25-29 in Chicago, was a success. Over a very busy five days, delegates from UE locals around the country discussed and adopted more than 30 resolutions setting the union’s course for the next two years in bargaining, organizing and political action; participated in workshops that enhanced their union skills; and rallied on the streets of Downtown Chicago against three giant corporations that are driving down or holding down wages: GE, Walmart and McDonald’s.

In his keynote address to the convention, President Bruce Klipple assessed the difficult political and economic landscape faced by workers today, and the courageous and exemplary struggles waged by UE locals over the past two years. He said that UE personifies the three-word slogan adopted for this year’s convention, “Resist, Revive, Resurge”, and the rest of the labor movement would do well to adopt more of our principles and tactics.   “Because we refuse to join the “race to the bottom today, some tell us, ‘Well UE, they’re out of touch, still living in the past.’ I say the hell we are, because we’re not giving in, we’re not giving up, join and fight with us, or get the hell out of the way. We’ll show you how a union fights back, because it’s who we are!”

On Monday afternoon, Director of Organization Bob Kingsley delivered the organizing report, which also involved newly-organized workers, and UE elected leaders and staff who have helped bring in new members, coming to the stage to report on their struggles and successes. “We must stand up and fight for our rights or soon we will have none at all,” said Kingsley, as he described the innovative tactics the union has used to build the workers’ movement over the past two years, despite many obstacles.  He also introduced the UE Young Activists who attended the convention, and who participated in educational and organizing events in the two days preceding the convention. The Young Activists later that day also served as marshals, organizing and directing the march and rallies at GE Transportation’s offices, a McDonald’s in the heart of busy Union Station, and a nearby Walmart store.

Secretary-Treasurer Andrew Dinkelaker made a detailed presentation on the union’s finances to the Wednesday morning session, and reviewed the proposal to switch to a system of per capita payments by locals to the national union based on a formula of 1.65 hours wages per member per month. On Wednesday afternoon delegates voted to approve a series of amendments to the UE Constitution, including changes that will phase in the hourly per capita system. Under UE’s democratic procedures, those amendments have now been forwarded to all UE locals for ratification votes by the membership.

There will be much more detailed reports on the UE Convention, including many photos, in the Autumn issue of the UE News, scheduled for publication in early October.