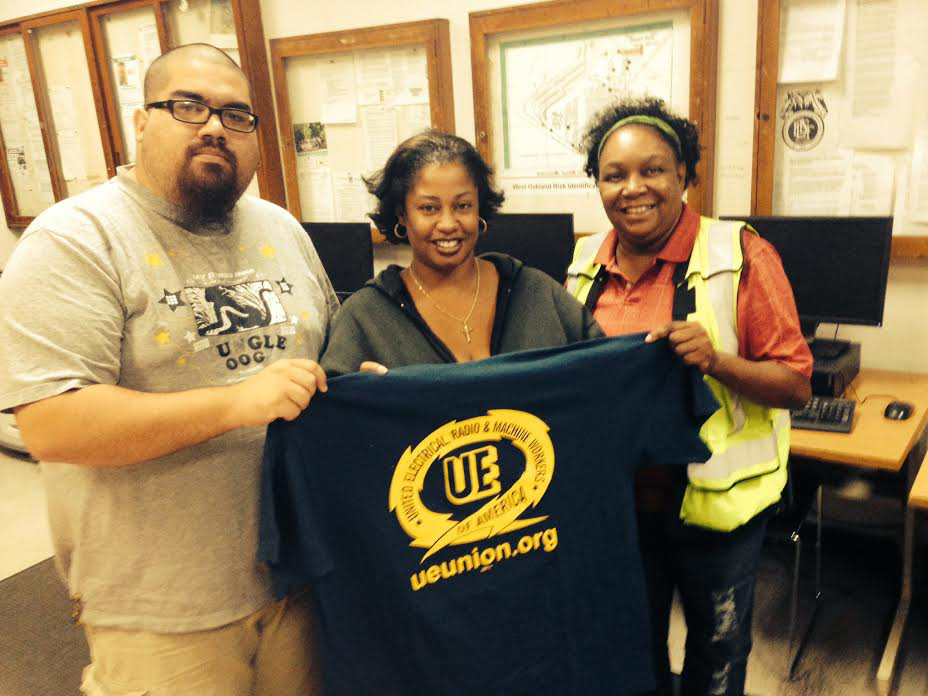 After a four year struggle for a real union and four months of negotiations, including 13 days at the bargaining table, Renzenberger drivers in California have ratified their first UE contract by a margin of more than 96 percent. In a major breakthrough, the union won the company’s agreement that drivers in California and the Chicago area – two of the company’s biggest markets – will be under the same contract, which will expire August 23, 2018.

“In these negotiations, I think we won the battle,” said Ricardo Rodriquez, a member of the bargaining committee and a driver in Barstow. “We got some protections so drivers will be able to work and not be looking over their shoulder wondering whether or not they’re going to get fired or suspended.” Rodriquez is proud that the California and Chicago members are now under one UE contract. “I predicted that we would end up with a master contract, but I didn’t think it would be this soon. When you talk to a driver in the yard and tell them that we’re in a master contract other brothers and sisters in the central states, their eyes open wide and they say, ‘Wow! That makes us stronger.’”

The California drivers prevailed in an NLRB election in January in which they defeated the gangster-controlled incumbent union by a margin of nearly 2 to 1. The election culminated what up to that point was a three-year campaign by these workers for union democracy and representation. The nearly 600 workers, who drive vans to transfer railroad employees to and from work sites, work at 25 rail yards all over the state. They are now represented by UE Local 1077. Other Renzenberger drivers in Illinois, Indiana, New Jersey and Ohio were already covered by UE contracts.

“This is a big victory for democratic unionism and membership mobilization,” said UE Director of Organization Bob Kingsley. “This new local got a resounding vote of confidence with a big turnout and overwhelming margin of ratification, by members along 700 miles of railroad from Northern to Southern California.  This new master agreement brings not only immediate gains and combined strength to win further gains in the future, but also expands UE’s reach in the rail industry, an important strategic base for our union. This win sets stage for additional organizing among rail crew drivers nationwide.”

On wages, the contract will bring $1.55 in increases over four years to the yard rate, which is the base rate for all drivers. In addition workers will continue to receive periodic step increases of 25 cents which will bring them an additional $1 in raises over four years. Drivers will continue to receive the step increases after they reach 10 years of service, which was not previously the case. Each driver also received a $100 signing bonus.

Road drivers – those who make longer trips – receive an additional hourly payment called the road driver differential. The company paid different rates to drivers in different parts of the state. The new contract increases the road driver differential by 50 to 65 cents for those rail yards that were receiving a lower rate in order to reduce these inequities. The new contract adds an additional day of paid time off. Bereavement leave is increased by one day with niece and nephew now covered.

Drivers won a number of important contract language provisions to secure fair treatment. Layoffs, transfers and filling job openings will now be by seniority. To correct short schedules, the contract requires the employer to make “every reasonable effort” to provide drivers with 40 hours of work. Administration of the trip board for road drivers will be improved to provide more fairness in the rotation.

Discipline and discharge shall only be for just cause. The employer has a time limit of five days to impose discipline after the alleged infraction occurred, unless it notifies the driver and the union that it is still investigating, and drivers must be notified when they’re receiving discipline. If a driver is banned from the premises by the railroad, Renzenberger must notify the union and attempt to retain the employee. The work rules will be divided into four categories so that discipline for unrelated infractions can’t be used to fire a worker.

Union stewards will have the right to investigate and process grievances during work hours as long as this doesn’t interfere with their job responsibilities. The union will be provided 20 minutes to address new employees during orientation. Union officers and stewards will be able to take union leave to conduct union business. The company will deduct union dues from members’ paychecks and forward the money to the union.

The new contract was won not just at the bargaining table, but through broader involvement by members on the job. A contract support committee of 84 people helped communicate news from negotiations and get member feedback. After each round of bargaining sessions the union published a newsletter and help update meetings around the state. Stickers calling for “Fair wages” were worn by members all over the state on a designated day in August.

Even before the contract was resolved, the local had trained some three dozen stewards to represent members and had won a variety of grievances, including reversal of two firings and winning back pay for several unjustly suspended members.

Renzenberger drivers in Chicago, represented by UE Local 1177 since 2010, will receive additional hourly wage increases of 35 cents in 2016 and 45 cents in 2017 as part of the settlement.  In addition, they will get improvements in paid time off and bereavement leave.  The Chicago drivers won several important language gains, including increased protections from discipline and seniority protections for both yard and road drivers.

Malissa Gollagher is a driver from Roseville who was very active on the organizing committee and then the contract support committee. “I’m really proud of the people on the bargaining committee,’ she said. “It took a lot of effort and heartache. I’m sure after we get our union going under the new contract it’s going to help us out a lot. We’ve still got a long way to go – getting our bylaws and electing officers, and getting the company to cooperate. I’m kind of excited to get it going. Everybody did a great job so far, and we’ve just got to keep on trucking.”

For Ricardo Rodriquez the contract was a long time coming. “I’ve had a handle on this struggle for the past four years,” he said. “We lost the first time at the labor board when they ruled against us, but I never lost hope, and UE never gave up on us. We were just waiting for a window. Our battle intensified when we petitioned for UE, and we found ourselves fighting on two fronts, not just to throw out the mob-run company union, but fighting the company too. We were victorious in putting in a true union, UE.”