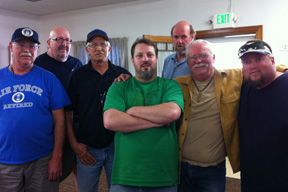 In February, by a margin of nearly 2 to 1 over the incumbent company union, Renzenberger rail crew drivers at more than 30 rail yards covering the length of California voted in a mail-ballot election to be represented by UE. Like Renzenberger drivers who have previously joined UE in Illinois, Indiana, New Jersey and Ohio, these workers suffered from low wages, outrageously unfair work rules, abusive bosses, and lack of benefits.

The election win culminates a three-year campaign among the 550 Renzenberger drivers the state to rid themselves of a corrupt company union and gain the opportunity to build a real rank-and-file union that will enable them to fight for decent pay, working conditions and benefits. The company and the company union used every trick they could devise to block or delay a vote, but the persistence of UE and the drivers fighting for a real union eventually prevailed, and the National Labor Relations Board (NLRB) scheduled an election.

The labor board mailed ballots to workers’ homes on January 29, and completed ballots needed to be returned in time for the February 18 vote count. The vote totals were 207 for UE, 117 for the company union, 33 for no union, and 11 void ballots.  Several drivers from the Roseville rail yard attended the vote count as witnesses. Ballots were counted at the Oakland office of the NLRB. At the UE Western Region meeting in Milwaukee on March 29, UE Director of Organization Bob Kingsley presented three of the drivers their union charter at UE Local 1077.

These drivers – whose workplaces stretch more than 700 miles from the Mexican border to the far north of the state – now join Renzenberger drivers in the Chicago area, New Jersey, and two yards in Ohio, as members of UE. This unity will give them more strength as they fight to improve wages and conditions in an industry notorious for low pay, irregular hours and few if any benefits. Before the election two drivers from UE Local 1177 in Chicago, Robert Bridgeforth and Local President Phil Dedera, traveled around California to meet face-to-face with fellow Renzenberger employees and discuss the improvements they’ve already made as UE members, and how much more can be accomplished by expanding and strengthening the union.

William Bradburn has worked for Renzenberger at the Roseville rail yard near Sacramento for over three years and has been working most of that time to get rid of the company union and bring in UE. He attended the vote count in Oakland and told us the following day: "This has been thrilling all the way. It’s been quite a process. The relief is tremendous. Everybody is just buzzing up here, it’s really exciting." He added, "The first thing we need to do is thank Chicago. Everybody up here really wants to thank Chicago, because they came out and helped. They said they were going to do it, they did it and it helped tremendously."

Ricardo Rodriguez is a driver based in Barstow, and has been active since 2010 in the effort to organize drivers into UE. Even though workers had signed up for UE, after the company brought in a company union, and the NLRB denied them a vote to choose their union. “So we had to wait three years. So we had a bad contract with a company union that only got us 25 cents in three years, no changes, no representation. But we never gave up hope.

“We contacted UE again last fall, started a petition drive, and UE came through for us. They kept their word that they would come back, especially Fernando Ramirez. We had 99 percent sign-up for UE in Barstow.” He described how the company union tried to prevent a vote again by signing another sweetheart contract with the company, and they bragged that they had gotten workers 25 cents in raises. But these raises were simply increases in the California minimum wage mandated by the state legislature, not anything the union had negotiated. “We had no right to vote in that so-called union. A union is supposed to be a democratic organization, one person one vote. They would not give us that. Now we’re here, we’ve got our union, and I’m proud to be in it.” Rodriguez has family history in UE; his brother participated in the organizing campaign and strike at Kraco in the 1970s in Compton (now UE Local 1021), and another brother, a civil rights attorney, helped. As a teenager, Ricardo joined the picket line.

Malissa Gollagher is a driver in Roseville. She recounted the frustration of trying to reach representatives of the company/mob union for answers or help. “You’d call them multiple times, never get an answer, all the way up to the president, never get an answer. If you did get someone on the line it was ‘We’ll have him call you back, he’s in a meeting,’ and then you never hear from him again. I have over 100 calls recorded that I made to that union, that were never answered.”

So she started working with Bill Bradburn and Steve Hebert to organize UE. They organized meetings of Roseville drivers, inviting drivers from other yards to attend or hold their own meetings so drivers could all get organized. She described how the mob-connected company union finally began paying attention to them, sending big muscle-bound “representatives” to meetings called by the company, which workers were paid to attend, to intimidate drivers who were supporting UE. About eight drivers from Roseville made lists and started phoning workers in other parts of the state. “It really helped our campaign. I think we gave a lot more people a more secure feeling.”

Marcy Stoeven had been in two other unions at other employers, but coming to work at Renzenberger “was an eye opener”. She was shocked by the bad working conditions and pay. The threatening tactics of the company union at a company-sponsored meeting motivated her to fight for a real union. “I thought, ‘I don’t like these guys,’ just as a gut reaction, ‘These are bad guys.’Then I went out in the parking lot and met Adrian, and I thought, ‘Wow, at least this guy is honest and straightforward, and had the guts to come and wait outside the meeting.’ I just wanted to help any way I could, because I realized things were not going to get better for us until we got a real union.”

Robert Bridgeforth is a UE Local 1117 member and Renzenberger driver from Chicago who spent a week in California with UE organizer J Burger, meeting Renzenberger workers at many rail yards. “It was a wonderful learning experience,” he said. “It was my first time. I met a bunch of wonderful fellow drivers. They had been literally lied to. We had just finished negotiating our second contract here in Chicago. And 707 had told them, and printed statements saying that we lost jobs, we didn’t get any more benefits – they just made it seem that they were the savior of the world and UE accomplished nothing. So one of the things that I did when we got into meetings with them, as I stood and introduced myself to them, I held out my hand and I told them “touch this.” And they looked at me and they were quite apprehensive at first. I said no, it’s no trick or nothing sinister, I want you to touch me, and I went around the table and all of them touched me. And I said, ‘Having had you do that, let me ask you a question. When you touched me, did your hand pass through my hand?’ And they looked at me quizzical, like, ‘Have you lost your mind?’ And then one of them said ‘no.’ And I said, ‘OK, you just touched me and your hand did not pass through mine, which lets you know that I’m not a spirit, I am for real. And I’m standing here as a representative of UE Local 1177 in Chicago to let you know that all the things that 707 has been telling you that they did, or that we lost, is a complete lie.”

Bridgeforth concluded, “With the re-election of UE here in Chicago, and with the acceptance of UE out in California, it should be sending a strong message across the country that UE is for real, that UE is vibrant, that UE does perform and most important, UE is a member-driven union. When you don’t know what’s going on and you have no input or no say, then you’re like a puppet. But UE is open, the information is there for anyone who wants it, anyone who needs it, we’re transparent. It’s all there in front of you, all you have to do is look at it, and I think that’s a wonderful thing.”

Phil Dedera, Local 1177 president, also spent a week in California, where he traveled 1,500 miles meeting drivers around the state. He reflected on what the win means to Renzenberger drivers in Chicago and in California. “It means to me that we’ve got brothers and sisters in other states that will support us in our struggles with this company. It means having our own officers and stewards who work driving and know the needs of the membership. It means that the region and the national union will serve you, provide representatives to help you with your negotiations and your grievances. It means on things where we need it we have legal counsel from the national union to support us in serious confrontations with the company.

“I was so impressed with the people out there,” Dedera added. “Some of them stood up for the Chicago drivers back in October when the company wanted to send scabs to Chicago when we were negotiating our contract, and said they would not scab. Some of these people have been struggling for years to get a decent, good union in there that would represent them, and that is the UE.”