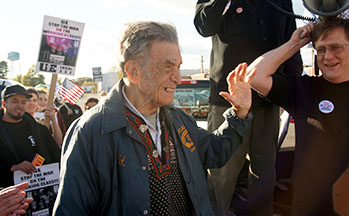 Retired UE International Representative Ed Bloch died in his sleep on Sunday, August 24 at his home near Albany. He was 90 years old. Bloch was first hired by UE in 1951 in the national office in New York City, but spent most of his long career with UE in upstate New York, assisting UE locals and organizing the unorganized. He retired in October 1984 but continued to work with UE locals, especially Local 332 at GE in Fort Edward.

Ed Bloch was born in Manhattan in 1924. He served in the U.S. Marines in World War II. An experience late in his military service drove Bloch’s lifelong quest for justice and peace. In November 1945, three months after the Japanese surrender, Bloch’s platoon, on his order as platoon leader, opened fire on a Chinese village of unarmed civilians who were Communist sympathizers. Bloch traveled to China in 2011 with his wife, daughter and friends to apologize for what he considered an atrocity. An elderly Chinese politician told him he was forgiven. “Before they pull the sheet over me, I wanted to seek justice,” Block told the Albany Times-Union after the trip. “I felt I had sinned. I needed to make amends.”

The memory of that 1945 incident in China drove Bloch’s passion for union work and in opposing war. He was active in Veterans for Peace from the Vietnam era until his death. In a wheelchair, he joined the Veterans for Peace contingent in Albany’s 2014 Memorial Day Parade. Bloch was also active in building labor-religious coalitions and in the Solidarity Committee of the Capital District, which brought together unions and supporters in the Albany area.

As a UE organizer, Bloch fought fearlessly to defend the union when it was under severe attack in the 1950s from employers, the government and rival unions, at plants such as the Schenectady, NY GE plant and RCA in Lancaster, PA.

In 1984 and ’86 Bloch ran for Congress against Republican Gerald Solomon, a longtime incumbent. His platform as a candidate reflected UE’s policies on national issues: worker rights, economic justice, and peace.

“Ed Bloch was an inspirational figure to several generations of UE activists and organizers,” said Steve Tormey, retired international representative who worked with Bloch on GE issues. “He swam in waters that were not always friendly,” Tormey added, such as Bloch’s efforts, often successful, to convince veterans groups to oppose U.S. military interventions.

Bloch is survived by his wife Naomi, four children, four grandchildren and two great-grandchildren. There will be a longer obituary in the next issue of the UE NEWS.