Ferguson Affects Us All: Statement of the UE General Executive Board 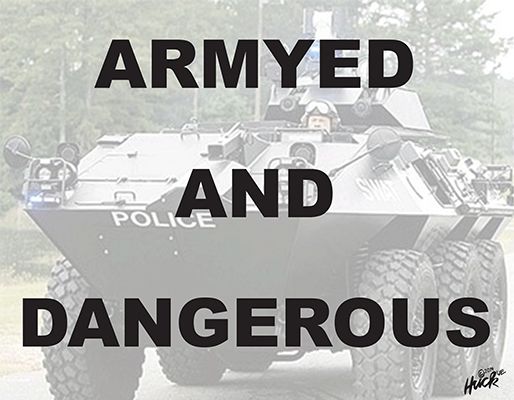 The UE General Executive Board, in its triannual meeting September 18-19 in Pittsburgh, adopted the following statement on the recent events in Ferguson, Missouri.

Ferguson Affects Us All

UE activists are joining members of labor, civil rights, religious and community groups around the country in expressing outrage over what transpired in Missouri. Members of Local 150, UE's statewide organization in North Carolina, have participated in prayer vigils, protests and public discussions. UE members have been active in other states as well.

On August 9 Michael Brown was shot six times by white police officer Darren Wilson. Brown was unarmed. After the shooting the police left Brown lying on the street for hours. Wilson and other officers who came to the scene did not even bother to check for a pulse, nor to call for emergency medical assistance. This is an indication of how little Brown’s life mattered to them. Ferguson is more than 67 percent black, but the police force is 95 percent white. Wilson lives 18 miles away from Ferguson in Crestwood, a community that is 94 percent white.

Polls have shown the response to the events in Ferguson to be sharply divided by race. This is discouraging but not surprising. Division of the working class by race has been a major hindrance to the development of a strong labor movement in the United States. Since the birth of our union, UE has recognized this, and racism is a topic of discussion at every UE convention. At our 2013 convention delegates discussed and adopted a strong resolution titled “Fight Racism.” That resolution addressed, among other issues, the disparities in law and in policing that have led to the deaths of Michael Brown and many other African Americans. “Skin color makes some Americans more likely to be stopped by police, more likely to be searched, and more likely to be arrested.”

The killing of Michael Brown angered and upset many people in Ferguson and the St. Louis area and led to daily protests in the streets of Ferguson. The protests brought an extreme, hostile response from the Ferguson police, who took to the streets in military gear, equipped with military vehicles and weapons, treating members of the grieving community as though they were enemy combatants. Police attacked protesters, and even attacked and arrested reporters away from the protest scene. The overreaction by the Ferguson and St. Louis County police was so blatant that the governor intervened and placed a state police captain in command of the situation.

The events in Ferguson have focused attention on the militarization of policing in America. For several years the Pentagon has been “gifting” local police departments with surplus weapons from the wars in Iraq and Afghanistan. Almost 13,000 police agencies in all 50 states participate in this military “recycling” program, which grows every year. In 2011, $500 million worth of military equipment was distributed to police departments, and that number jumped to $546 million in 2012. Since 1990, $4.2 billion worth of equipment has been transferred from the Defense Department to domestic police agencies. Since 9/11 the Department of Homeland Security has delivered another $34 billion to police departments so they could buy military weapons and equipment. Many local police departments now have their own 20-ton Mine Resistant Ambush Protected (MRAP) vehicle. When have land mines ever been an issue to which our police departments have needed to respond?

Local police departments are being transformed into municipal armies, equipped and deployed for combat, which treat residents as “the enemy” rather than as the constituents whom they are committed to protect and serve. The problem is worse when a racial divide also exists between the police force and residents, as in Ferguson. We have also seen, in Ferguson and in the militarized police response to Occupy Wall Street and other peaceful protests, what journalist Max Blumenthal has called “the Israelification of American domestic security.” Tens of thousands of U.S. police officials have been sent to Israel to learn policing techniques. Part of what they learn from the Israeli authorities is to view residents of their communities – especially minorities and protestors – as “terrorists” against whom the police must wage war. Among the officers receiving this Israeli training in 2011 was the chief of the St. Louis County police.

Militarization of policing and turning routine law enforcement into a “war on terrorism” go hand in hand with government and corporate spying on all of us, which not only attack our right to privacy, but our right to dissent. A government that is watching and listening to everything we do, and has the military means, right in our own communities, to crush us if it thinks we’re out of line, is a frightening prospect. UE members witnessed the militarization of police in the October 1, 2012 rally in solidarity with the strike of workers at a Walmart warehouse in Elwood, Illinois. Union members and supporters were confronted by police dressed for combat in full body armor, with an armored personnel carrier and a sound cannon. Peaceful protests at the 2009 G-20 summit in Pittsburgh, and the Occupy Wall Street movement, have met similar militarized police responses. This militarization of policing will increasingly result in more aggressive and repressive treatment of labor strikes and political and anti-corporate protests in which union members participate.

This brings us to an important insight about Ferguson that was raised by Kareem Abdul-Jabbar, the retired basketball great and longtime human rights advocate, in an opinion article in Time magazine on August 17, with the provocative title, “The Coming Race War Won’t Be About Race.” The issue, says Abdul-Jabbar, is “class warfare,” which is visible in the political agenda of “millionaires and billionaires who lobby to reduce Food Stamps, give no relief to the burden of student debt, and kill extensions of unemployment benefits.”

The protests in Ferguson are justified, says Abdul-Jabbar, but a much broader coalition is needed. “The middle class has to join the poor and whites have to join African-Americans in mass demonstrations, in ousting corrupt politicians, in boycotting exploitative businesses, in passing legislation that promotes economic equality and opportunity, and in punishing those who gamble with our financial future.”

We agree. But we won’t succeed in building the united movement Abdul-Jabbar calls for unless we also take on racism in policing and the judicial system, and government spying and militarized policing that threaten the civil liberties and the civil rights of all of us.