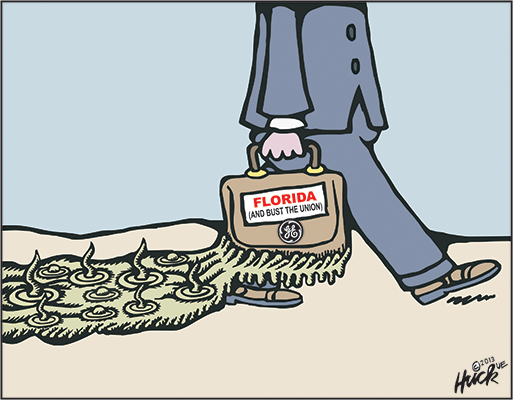 Beginning in 1947 and continuing until 1977, GE intentionally dumped approximately 1.3 million pounds of highly-toxic polychlorinated biphenyls (PCBs) into the Hudson River from Fort Edward and the neighboring plant in Hudson Falls (now closed.) GE also polluted the soil and groundwater under its plants and in the surrounding communities.

GE used PCBs as an insulator in the capacitors manufactured in these plants, as well as in transformers produced at other locations. Although GE had evidence of the toxicity of PCBs as far back as 1936, and clear knowledge since the 1960s that they are very harmful to humans and wildlife, it continued to use them, and dump them into the environment, until after the federal government banned them in 1976.

PCBs are a carcinogen and suspected reproductive toxin. They are “persistent” chemicals which do not readily break down in the environment or in organisms, and they lodge in the fat tissues of animals and humans and become more concentrated as move up the food chain. (High concentrations are found in polar bears, an animal at the top of the marine food chain.) New studies released in the past few months show connections between PCBs and Parkinson’s disease; that they accumulate in greater levels in children who live near highly contaminated sites; and that they alter bird behavior. PCBs accumulate in breast milk. GE’s dumping of PCBs into the Hudson devastated commercial and recreational fishing, and in September the New York Department of Health renewed its “do not eat” warning about Hudson River fish for children age 15 and under and for women of childbearing age.

GE tried for years to evade responsibility for this disaster. Former GE CEO Jack Welch was obsessed with denying the dangers of PCBs and avoiding any GE involvement in cleaning up the mess. Welch personally lobbied and pressured elected officials and environmental regulators against a cleanup. GE was finally forced to pay for dredging of the river to remove PCBs, which began in 2009. A multi-year dredging project to remove GE’s PCBs from the river continues today, as do harmful impacts on the environment and human health. The river from Hudson Falls to Lower Manhattan is the EPA’s largest Superfund site, requiring long-term cleanup of contamination.

When GE announced in September its plans to close the Ft. Edward plant, Local 332 President Scott Gates said, “Closing our plant will hurt 200 families of GE employees and many more families in our community,” and added that GE has an even larger obligation because of the environmental damage it has caused. “It would be a gross injustice to all the people of our region and of New York State, for GE to take away these jobs and leave us nothing but polluted land and a poisoned river. GE owes us much more. At a minimum, GE has an obligation to keep these jobs here.”

The Ft. Edward plant site itself sits atop what workers call a “reservoir” of pollutants, including huge quantities of PCBs as well as trichloroethylene (TCE), a toxic solvent. The company maintains pumping stations in the plant parking lot and regularly pumps these poisons out of the ground.

Bruce Ostrander, who first began working at the Ft. Edward plant in 1977, recalls how GE retirees and workers met early deaths. “My father worked here and like many other older people that have worked in there, my father lived two years before cancer got him.

“I can remember as a kid – PCBs were legal at the time – my street was a dirt road, and the towns would get the PCBs from GE and they’d spray them on the dirt roads all summer long to keep the dust down. I can remember as an adult, in 1977, when PCBs were illegal and I worked in the mill, and management had employees dumping barrel after barrel of PCBs into the parking lot from 11 to 7, and that is a fact. And you can print that and they can come after me if they want to.”

GE is not only planning to walk away from the Ft. Edward workforce, but also to declare the Superfund cleanup of its PCB pollution finished and to walk away from any further responsibility. Environmentalists and communities are not pleased. On December 4 four environmental organizations issued a press release demanding that GE “address areas of substantial pollution that are not included in the current cleanup plan and will otherwise remain behind in the river long after the current Superfund cleanup is complete.” The organizations Clearwater, Riverkeeper, Scenic Hudson and the National Resources Defense Council (NRDC) called specifically for GE “to conduct critically needed dredging in the Hudson’s PCB-laden navigational channel and address the 136 acres of highly contaminated river sediments already identified by the Natural Resource Trustees as a cause of delay for the river’s full recovery.”

NRDC Attorney Johanna Dyer summed up the views of the environmental groups as well as public officials of several towns on the upper Hudson: “For GE to leave and call this cleanup ‘mission accomplished’—knowing what we know now about the additional contamination that will remain—would be to abandon the people and communities along the Hudson River all over again… GE must finish the job before it pulls its dredging operations from the water to minimize the costs to the public and restore the river as quickly as possible.”