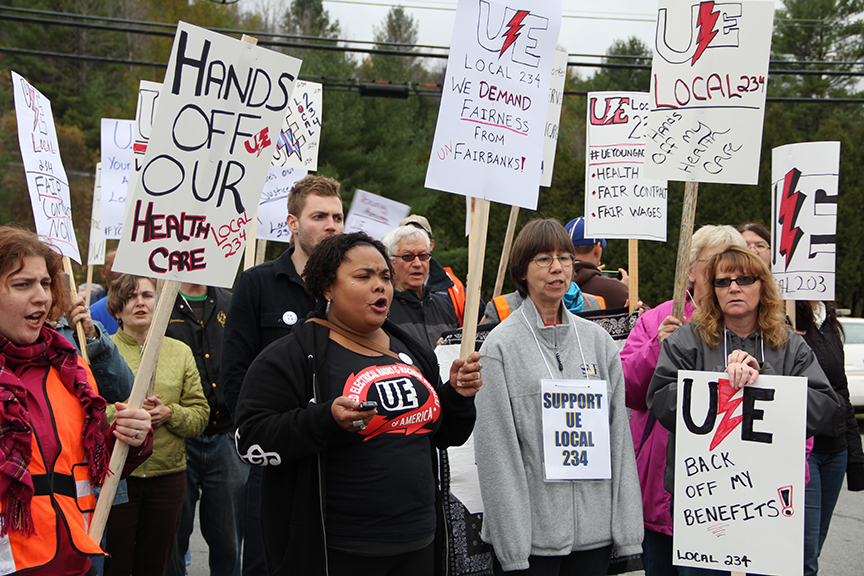 Following a month of negotiations and the big October 24 plant gate rally by Northeast Region delegates and Local 234 members, the local on October 29 reached agreement on a new three-year contract with wage increases of 4 percent, 2 percent and 3 percent.

Life insurance and accidental death and dismemberment were significantly improved, and will now equal the employee’s straight time annual earnings, rounded up to the next thousand, with a minimum of $33,000 and a maximum of $50,000. Previously the coverage was $29,000.

On health insurance, the union fought back big increases in employee costs. Insurance contributions will be unchanged in 2015 and 2016 and go up slightly in 2017, but employees who use tobacco will pay somewhat higher contributions in the third year. Medical deductibles go up slightly. Generic prescriptions remain 100 percent company-paid, with some changes in later years to brand-name coverage. Dental coverage remains the same as in the old agreement.

The safety shoe allowance was increase from $75 to $85 per year, and the employees in the highest-risk classifications will get $135. Workers will have the option to split the allowance over the purchase of two pairs of shoes.

The union also gained language allowing the union president a “reasonable amount of time” to address new employees during their orientation. Overtime language was modified to allow more flexible hours for the worker’s convenience.

“I think it’s a fair contract," says Local 234 President Polly Scott. "It was a long hard battle, but with the help of the Region, I think we made out point clear that we weren’t backing down. They wanted concessions. That rally was a big help."