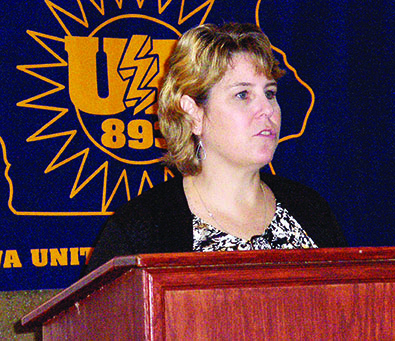 Two enormous challenges face UE Local 893-Iowa United Professional this fall: state elections in which the future of public employee unions is on the line, and contract bargaining with heath insurance under attack. Delegates to the local’s annual statewide convention on July 26 devoted their attention to preparing for those coming battles.

In her opening address, Local 893 President Becky Dawes told delegates that public workers are under attack everywhere. “We must continue to strengthen our Union by continuing to increase our membership,” she said. “Short term we need to do this to prepare for this fall’s contract negotiations, long term we need to increase our membership to fight back against those who do not like public employees or believe in the essential public services we provide”.

Over the past few months all members were sent contract surveys.  President Dawes and International Representative Greg Cross went over the surveys with the convention delegates and had the delegates assist with establishing the priorities for the upcoming contract negotiations.

The convention included an important discussion on the history of public-sector unions and the origins of the current political attacks. Delegates were reminded that the current Republican governor, Terry Branstad, has been hostile to public employees and unions for a long time. In 1974 Iowa passed the Public Employees Rights Act under Republican Governor Robert Ray. Branstad, then a state representative,  not only voted against the bill, but proposed many of the 60 amendments adopted, and more that were defeated, which sought to weaken the bill’s ability to protect public workers.  In 1993 public workers won 5 percent raises in binding arbitration, defeating the state’s proposals of zero raises. Complying with the law and the arbitrator’s ruling, the state legislature appropriated funds to pay for the raises. Branstad, who was by then governor, vetoed the appropriation bill.  The State Supreme Court eventually overruled Branstad’s veto. Through his career, Branstad has shown that he is at least as opposed to public workers’ rights as Governor Walker of Wisconsin.

There have been many attempts in recent years to gut public workers’ rights in Iowa. Each of these attacks by the Republican governor and Republican State House of Representatives was blocked by the 26-24 Democratic majority in the State Senate.  This fall half of those Democrats are up for re-election and five are facing serious threats to their re-election.  There are also four Republican state senators who are facing strong challenges from Democratic candidates.  Local 893 officers urged union members to vote, do turnout, and educate their co-workers, friends, and family on threats to their livelihood at stake in this fall’s election.

UE Western Region President Carl Rosen reiterated the challenges facing members of Local 893 in both the upcoming elections and negotiations.  He told members that the Western Region stands with 893.  Delegates from each of the sub-locals also reported on their work, which led to discussion the things sub-locals across the state are doing to increase membership and participation. Iowa is a “right-to-work” state that creates incentives for union-represented workers to refuse to join their union, so constant organizing is an imperative for UE’s public sector locals and sub-locals in the state. Local 893 is composed of state employees including social workers and income maintenance workers, as well as other public employees.  The local has members in each of Iowa’s 99 counties.