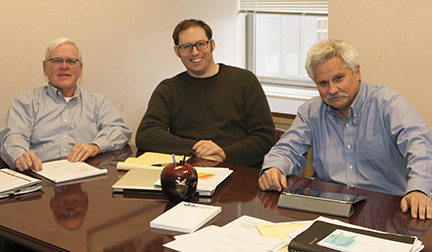 As one year ends and another is about to begin, we wish all our members and your families the best in the holiday season and health, peace and prosperity in the New Year. We also think this is an appropriate time to reflect on where our union and the working class movement have been, and where we’re headed.

We first want to recognize the courage and determination of the members of Local 279 in Ipswich, Massachusetts, who as we write this are on the picket line outside the Weir Valves plant. They’ve received a lot of support especially from other Northeast Region locals. Local 279 is a UE local with a long and proud history, chartered in March 1942, but with plenty of young members and leaders today. They are providing a good example of how UE’s traditions of militant rank-and-file unionism are passed from generation to generation within a local, and hopefully from our older to our newer locals as well.

The determination – we could say the stubborn determination – of California Renzenberger workers also deserves acknowledgement and praise. Many of them stuck with the fight for democratic unionism and justice on the job for four years. Their persistence paid off in October, with a first UE contract covering these nearly 600 rail crew drivers. They made gains in wages and on-the-job worker rights, and also made a breakthrough that will have long-term benefits: a master agreement covering both the new Local 1077 and the Chicago-area Renzenberger unit, UE Local 1177. That means in the future the two locals will bargain with the strength of over 700 members. The union is looking to increase those numbers with more organizing in the Renzenberger chain.

We look back at other recent wins. Local 267 members at the University of Vermont spent a year reorganizing and revitalizing their local in preparation for what they knew would be tough negotiations. As the UE NEWS reports in its current issue, that work paid off with a contract containing gains not givebacks. They also gained increased involvement of members, including younger members, in the life of the local.

UE members who don’t have contracts also waged admirable fights that won them gains. That includes the members of the UE Local 150 pre-majority union at Cummins Diesel’s Rocky Mount Engine Plant in North Carolina, the Carolina Auto, Aerospace and Machine Workers Union (CAAMWU). Their year-long shop campaign resulted last spring in an 80-cent across-the-board raise for production workers and 75 cents for skilled trades. The long fight of Local 170 in West Virginia for wage increases for underpaid state hospital workers resulted in a recent circuit court order that will mean $3 million in raises next year for workers at Bateman and Sharpe Hospitals. Similarly, the local’s seven-year fight to raise the wages of West Virginia state highway workers led to a new step pay progression plan that will mean raises for these workers next year.

Throughout 2014 UE has carried on its tradition of being on the front line of fights for social justice and peace. UE Local 150 has been an integral part of the Moral Mondays Movement in North Carolina which is having a big impact in that state and nationally. Members of UE have joined in actions of the “Fight for 15” movement to bring higher pay and unionism to workers in fast food, retail, warehousing and other poverty-wage sectors of the economy. Our members have been active in the fight for justice for immigrant workers and some, including Local 1103 President Lauro Bonilla, have participated in civil disobedience to stop deportations. UE members marched in Ferguson, Missouri, and demonstrated in their home towns, against the police killing of Michael Brown, and fatal shootings in other cities of unarmed young African Americans by the police.

Ferguson is the kind of issue UE must take on because standing up against racism has always been at the core of our mission. The manipulation of the grand jury by the St. Louis county prosecutor to avoid an indictment and trial of the officer who shot Brown, and the recent killing of a black 12-year-old boy by Cleveland police officers, underline the prevalence of bias and injustice in policing and the criminal justice system.

In 2014 UE also carried on its long tradition of being an advocate for peace and justice in international affairs. We spoke out against the Obama administration’s moves to re-involve the United States in war in Iraq. We denounced Israel’s aggression in Gaza, which was supported by our government, which resulted in the deaths of over 2,000 Palestinians, mostly civilians, 513 of them children. We opposed the administration’s hypocritical policies toward Ukraine and Russia, in which it orchestrated the overthrow of Ukraine’s government early last year by forces including neo-Nazis, and then accused Russia of aggression. We said these policies threatened to launch a new Cold War, or worse.

A UE delegation to Mexico in January participated in discussions and actions around the 20th anniversary of the North American Free Trade Agreement (NAFTA) and efforts by unions in many countries to prevent “NAFTA on steroids”, the corporate power grab known as the Trans Pacific Partnership (TPP). UE’s big presence at the Labor Notes Conference in April included our hosting of international delegates, and it was followed by a Chicago meeting with unionists from several countries to develop strategies to organize precarious workers. When France’s CGT sent members here in January to help a UE organizing effort at the same company that employs the French workers, it bolstered UE’s solidarity with that important labor federation.

In 2015 UE must continue to stand courageously for justice and peace in our country and in the world. We must mobilize to stop dangerous trade deals such as TPP, which threaten workers’ rights and democracy everywhere, and which will be high on the agenda of the new Congress. We need to continue to fight for immigrant workers, for peace, and against racism, as well as for workers’ rights everywhere. We’ll need to fight even harder on these issues, because after the disastrous November 4 election, we’ll be operating on even more hostile terrain nationally and in several states where our sworn enemies made significant political gains.

But our members also face immediate challenges in their efforts to improve their wages, benefits and working conditions, with many contracts up for re-negotiation. These include UE Local 893 and the State of Iowa, Local 896 and the University of Iowa, many contracts of Local 222 members in Connecticut, contracts for members of our three locals in USCIS service centers, and the national contract with GE that covers several UE locals. The New Year will be a busy one for the entire union, and our convention next August will be an opportunity for us to set the union’s future agenda and learn from each others’ recent experiences.

We are hopeful about the future because of activism among young people in this country, and in particular among young members of UE. Our Young Activist program has been a strong success in developing union involvement and bringing forward new leaders. The Young Activists have participated in marches, rallies, last April’s Labor Notes Conference, and many training events. Young Activists in all three regions recently produced short videos conveying basic lessons about UE-style unionism. The Northeast Region’s Young Activists organized the very effective rally and mass picket at Fairbanks Scales in October. A number of our Young Activists are now serving as stewards and officers in their locals. Through the Young Activist program, a new generation of UE members and leaders are gaining the accumulated knowledge of earlier UE generations and adding new ideas and tactics.

Over the past few years, young people in the Occupy Wall Street and Fight for 15 movements have done a lot to increase awareness of worsening economic inequality, and the harm being done to society by the greed of the wealthy elite, the 1 percent. Building a strong workers’ movement has always been the best way to counteract these corporate Scrooges, and this holiday season let’s all resolve to do even more in the year ahead to build this democratic, militant rank-and-file union, UE.

Robert B. Kingsley, Director of Organization