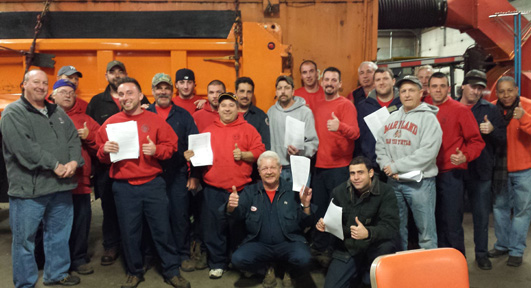 It took more than two years of bargaining on a contract renewal that should have been completed in June 2011. But in December workers in the North Haven Department of Public Works unanimously ratified a new four-year agreement with substantial raises, back pay for delayed raises, and other improvements.

The union negotiated new “stipend job rates” which provide additional pay for members operating specific pieces of equipment. Also added is a crew leader hourly stipend of $2.50 for highway personnel directing two other workers. Crew leaders directing three or more employees will receive an hourly stipend of $3.75. Language was also added that provides a $2 stipend for work related to snow clean-up. The contract also provides a $2 per hour wage adjustment in the lead mechanic position, effective July 1, 2013. In addition, each employee received a $500 bonus when the contract was ratified.

The new contract also established “on-call” pay for highway workers. Three employees will be “on call” at all times from May through September, for one-week periods by rotation, to cover emergencies.  From October through April six employees at a time will be on call, and year-round, two mechanics will be on call, also by rotation. Workers on call will receive a $60 weekly stipend.  New language allows employees to go home when storm “clean up” is completed, when the employee has worked through the night and into the next regularly scheduled workday.

The bargaining committee was strongly committed to winning significant pay increases and argued that North Haven DPW were underpaid in comparison to other towns in the region. In negotiations for the previous contract, the employer had agree to conduct a job compensation study, which would lead to upward adjustments in wage rates, with a minimum 2.5 percent increase, to be implemented starting July 1, 2010. The employer failed to live up to those commitments.  But the union committee and membership came into this round of negotiations even more determined to achieve some justice on wages.

At the end of negotiations, the committee felt that it had accomplished much of what it set out to do on wages. The unanimous ratification vote indicates that the members agreed. Highway worker Bob Ferarro commented, “First class service finally pays off! Our committee did a great job, and this is a contract that rewards hard work!”

Members of Sub-local 58 are covered by premium healthcare plan, for which the employee contributions were 6 percent in 2010. Under the new agreement members now contribute 9 percent to the premiums, and that will increase to 10 percent effective July 1, 2014. There are some minimal increases in co-pays for prescriptions.

The allowance for work clothes increased by $100, to $400 a year. New contract language provides mechanics with a tool reimbursement allowance of up to $750. Employees working outside their regular hours and through a meal time will receive a $2 increase in the food allowance for each meal during the hours they work. This will bring the food allowance to $5.50 for dinner (6:00 p.m. meal) and $5.25 for other meals.

There is a new education fund established, but with total funding of only $4,000. This will be made available, on a first-come-first-serve basis, to reimburse an employee or employees for taking job-related courses in which the employee receives a grade of C or better.

President Ken Rupley said, “This was a long battle, and our main goal was to fight for wages that compensate our members for the hard work that they do.” Union member Brandon Bosco added, “Mission accomplished, and right before Christmas!”