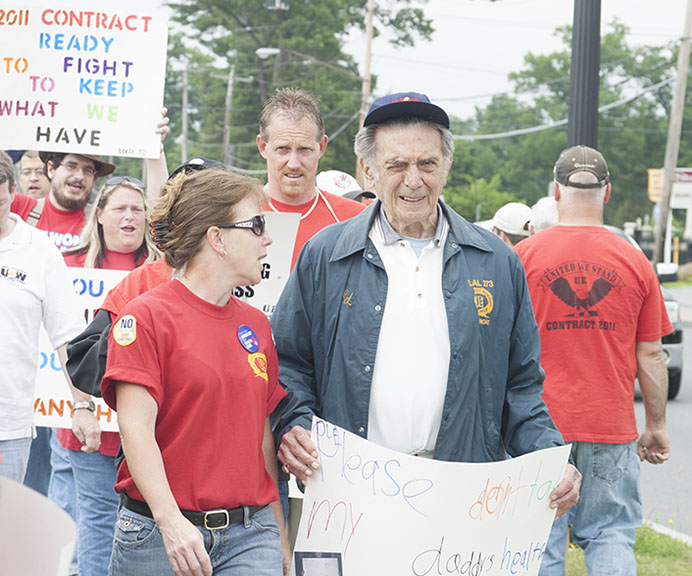 Retired UE International Representative Ed Bloch died in his sleep on Sunday, August 24 at his home near Albany. He was 90 years old. Bloch joined UE in 1950 when he got a job in a UE shop, and was hired onto the UE staff in 1951 in New York City. He spent most of his long career with UE in Upstate New York, assisting UE locals and organizing the unorganized. He retired in October 1984 but continued to assist UE locals, especially Local 332 at GE in Fort Edward.

Bloch served the union through some of its most difficult years, when UE was fighting for its survival when it was a chief target of the “red scare” of the 1950s, with attacks by the government, employers, and other unions. His transfer to Albany came after he took several beatings from a gangster-controlled “union” in New Jersey. Bloch and UE Local 404 Business Agent Jose Lugo had launched several attempts to liberate workers in low-wage shops from the company union, and were assaulted by goons each time. Then the mobsters sent a verbal message: “No more warnings for Bloch.” Bloch met with UE Director of Organization Jim Matles who agreed he should move.

Ed Bloch was born in Manhattan in 1924. He served as a lieutenant in the U.S. Marines in World War II and fought in Okinawa, earning a Bronze Star and Purple Heart. But when the war ended and Bloch and his unit thought they’d be heading home for victory parades, they instead received orders shipping them to Tiensin, China.

They were warmly welcomed by the Chinese people, but then shocked to witness what he called “the phony surrender” of Japanese troops. After laying down their rifles, and the officers’ swords, Japanese soldiers picked up their weapons again as soon as the cameras left. Bloch’s unit was ordered to fight alongside the Japanese, and Chinese puppet troops who had served Japan during the war, to take sides in China’s civil war, in support of Chiang Kai-shek’s Chinese Nationalist Party (Kuomintang). In November 1945, Bloch’s unit, on his order as platoon leader, opened fire on a Chinese village of unarmed civilians believed to be Communist sympathizers. Japanese units were also in this operation, on the same side as the Americans.

“People in my platoon cursed me out because we had been killing the Japanese and they’d been killing us three weeks earlier. ‘What the hell are you doing here?’ But I was in charge. I just didn’t listen.” Bloch was 21 years old. Following that attack, members of Bloch’s unit was ordered not to go out among Chinese civilians alone or in small groups, because the Chinese were so outraged at what the Americans had done. “It was a farming village. They were just farmers,” Bloch recalled decades later.

The memory of that attack haunted Bloch. He traveled to China in 2011 with his wife, daughter and friends to apologize for what he considered an atrocity. “I’ve waited 66 years for this,” he told one of his Chinese hosts. “Before they pull the sheet over me, I wanted to seek justice,” Block told the Albany Times-Union after the trip. “I felt I had sinned. I needed to make amends.”

A Chinese TV station produced a 20-minute documentary about Bloch’s 2011 visit and the history it illuminated. In the video he describes what the journey meant to him. “It was just relief, relief.” His daughter Linda Ayer, who accompanied Bloch to China along with his wife Naomi and two friends, says in the video, “I really hope that he has found some peace for inside, and I believe, looking at him that he has been able to achieve that.” The filmmakers give Ed the last word: “I guess one of my hopes is that children will be taught in school about this part of history. Some of us felt, to have wars of that kind, where so many civilians were killed, was pretty awful. What we have to do is learn to live together in peace.”

His widow Naomi says that for Ed the China trip was about “redemption. He was able to atone. He felt freed. A woman in China told him, here in the East if someone apologizes for something they have done, they’re forgiven. He really took that conversation to heart.”

Naomi says that the burden of that 1945 incident in China, as well as discrimination he experienced as a Jew in college and in the military, drove Bloch’s lifelong activism for justice and peace, including his commitment to UE. He was active in Veterans for Peace from the Vietnam era until his death. In a wheelchair, he joined the Veterans for Peace contingent in Albany’s 2014 Memorial Day Parade. He would always appear at such events in his uniform, which because of his devotion to exercise, still fit him perfectly. Bloch was also active in building labor-religious coalitions and in the Solidarity Committee of the Capital District, which brought together unions and supporters in the Albany area.

In 1984 and ’86 Bloch ran for Congress against Republican Gerald Solomon, a longtime incumbent. With Republicans holding a big registration advantage in the district, Bloch knew he couldn’t win, but he committed to running twice in order to raise issues and mobilize activists. His campaign platform reflected UE’s policies on national issues: worker rights, economic justice, and peace.

“I knew Ed for a long time and followed behind him on some servicing assignments, particularly in Upstate New York,” said John Hovis, former UE general president. “You can always tell when a person really does a great job and cares about the people when you follow behind them in servicing locals, and see the legacy that they left. That was especially true with Ed. People really missed him once his assignment was changed. And he was kind of an inspiration to all of us on staff, someone we could always look up to and hope that had the same kind of impact, and stayed as active in both political and union life as Ed was.”

“I met Ed at my first union meeting, 11 years ago,” recalls Scott Gates, president of UE Local 332. “The first time I heard him speak, I was impressed with his insight and the way he dealt with issues, evenhandedly. He knew the company was the enemy but he wasn’t bashing them. He was evenhanded, he was fair, he looked at all sides of an issue. And he loved the UE. I was at a meeting once, years later, and one of the members said something derogatory about the UE. I think Ed was 87 or 88 at the time. He jumped up out of that chair and he slammed his fist and he raised his voice, and he defended UE. Before anyone else could react, Ed already did it. The guy never forgot it.”

Gates adds, “I talked to him in depth about many subjects. He had insight about everything. And he never lost hope that things would get better.” Local 334 Business Agent Angel Sardina said Ed Bloch has always been around as long as he’s worked at GE, for 15 years. “He was here for us every time we needed him. When we went to Albany to talk to the governor he took us there and helped arrange things. He was a class-A man. I’m grateful to have known him.”

UE General President Bruce Klipple said of Bloch, “He actually worked for the union for 33 years, on the official payroll, and then worked another quarter century assisting us in upstate New York, mainly with Local 332. That was incredible dedication, right to the very end, walking the informational picket line with him during 2011 negotiations. I don’t know if I’ve ever met anyone who was as devoted to justice and peace as Brother Block. He’ll be remembered for a long time by our members who knew him.”

“Ed Bloch was a good trooper and a good mentor,” said Bruce Reese, former Local 332 business agent and still a GE worker. “He gave me a lot of good advice when I was the business agent, any rally we had, he was always there, no matter whether it was raining, snowing, and he was always ready for a fight. He’s going to be missed.”

“Ed Bloch was an inspirational figure to several generations of UE activists and organizers,” said Steve Tormey, retired international representative who worked with Bloch on GE issues. “He swam in waters that were not always friendly,” Tormey added, such as Bloch’s efforts, often successful, to convince veterans groups to oppose U.S. military interventions.

“He was a friend and mentor to generations of UE activists, local leaders, and organizers, including myself,” said Northeast Region President Peter Knowlton. “He was humble, frugal and honest. He engaged you in conversation and was a great listener. Some would say he was ‘old school’ but I think that generation of UE pioneers gave us something that’s timeless. Whether he was marching in the streets of New York City in 2002, in full military uniform with other veterans to oppose the invasion of Iraq, or talking to members about what needed to be done at a Local 332 membership meeting, Eddie was always the consummate organizer.  Up to age 90, he never stopped teaching and fighting and pushing us to get off our butts and build a better world.”

Ed Bloch wrote and self-published a book, a memoir and collection of essays, titled Courage, Coward, Courage!! Steps Along the Way. His family still has several copies of the book, and if you’d like to obtain a copy, contact the UE national office. Bloch is survived by his wife Naomi, four children, four grandchildren and two great-grandchildren.