Convention Wraps Up With Resolutions on Peace, Safety, Civil Liberties and Worker Rights 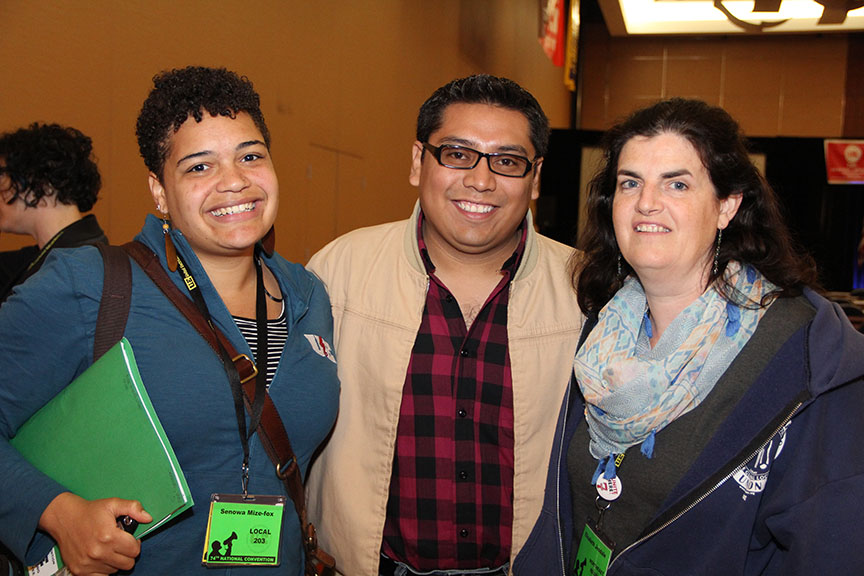 There were many smiles and goodbyes as the Convention ended. Senowa Mize-Fox, Local 203; Isaias Garcia, FAT; and Elizabeth Jesdale, Local 255.
August 28, 2015
Baltimore

The final session of the UE 74th National Convention on Thursday morning, August 20, discussed and approved several more resolutions, including "Stop the Dismantling of Public Education", "Build Union Co-ops", "Justice and Peace for the Peoples of Palestine and Israel," "For Peace, Jobs, and a Pro-Worker Foreign Policy", "Defend Civil Liberties", "Support the Family Farmer", "Fight Workplace Closings," "For a Safe and Healthy Workplace, Fix OSHA Now", and "Workplace Struggle."

Delegates upheld the UE tradition of taking courageous stands on foreign policy issues when they adopted the resolution on Palestine and Israel. It points to Israel’s long history of violating the human rights of the Palestinians, starting with the ethnic cleansing of 750,000 Palestinians in 1947-48 that turned most of Palestine into the State of Israel. It cites a statement issued by UE's officers in 2014 condemning Israel's war on Gaza last summer that killed more than 2,000, mostly civilians, including 500 children. It calls for cutting off U.S. aid to Israel, U.S. support for a peace settlement on the basis of self-determination for Palestinians and the right to return. The resolution also endorses the worldwide BDS movement – Boycott, Divestment, Sanctions – to pressure Israel to end its apartheid over the Palestinians just as similar tactics helped to end South African apartheid in the 1980s. UE is now the first U.S. national union to endorse BDS.

Speaking for the resolution were Angaza Laughinghouse, Local 150, Matt Braddon, Local 222; Chris Wolford, Local 170; Autumn Martinez and Elizabeth Jesdale, Local 255. Martinez and Jesdale both said they had met Palestinian trade unionists when they attended the World Social Forum in Tunisia, and Martinez said, “It’s absolutely disgusting what is going on. Free Palestine!”

The convention also adopted a resolution on numerous military and foreign policy issues from an independent labor perspective. “For Peace, Jobs and a Pro-Worker Foreign Policy” endorses the work of U.S. Labor Against the War (USLAW); calls for reducing the military budget while improving the pay and benefits of military personnel and veterans and converting to peaceful uses of resources now devoted to the military; demands the end of U.S. military intervention in the Middle East and other regions; calls for negotiation to resolve the Ukraine crisis; supports Zenroren’s call for demilitarization in Japan; and supports the agreement to prevent Iran from developing nuclear weapons.

“The labor movement needs to have its own independent foreign policy,” said Carl Rosen, Western Region president. Cettina Costagliola, Local 255, talked about meeting Zenroren members who came to New York in April to march for nuclear disarmament. “I’m so glad our Young Activists got to meet with Zenroren,” said Marie Lausch, Local 222, adding, “We to get rid of this culture of war.” Mike Ferritto, Local 506, talked about what he learned a few years ago on a Young Activist delegation to Japan. Brandon Dutton, Local 1161, said, “We have done enough damage. We need to get out of the Middle East.”

Delegates approved a resolution, “Defend Our Civil Liberties.” Peter Knowlton, Northeast Region, compared the role of the police to that of workplace supervisors. “We know from our own experience that what the boss says isn’t necessarily so.” But questioning a police officer, or just putting your hands in your pocket at the wrong time, can get you killed if you’re black or Latino. “We have to have a better understanding of government repression,” said Angaza Laughinghouse, Local 150.

Another resolution adopted Thursday was “For a Safe and Healthy Workplace, Fix OSHA Now!” Chris Wolford, Local 170, said, “We lost one of our members who worked for the Department of Highways when he was killed on the job, so this resolution is very important to us. The local has been fighting for OSHA protection for West Virginia public employees. Scott Slawson said Local 506 is circulating a petition calling for OSHA protection for public employees in Pennsylvania. Jay Huffton, Local 160, and Joni Anderson, Local 1107, also spoke on the resolution.

Delegates spoke about job losses and plant closings when the resolution “Fight Workplace Closings” was brought to the floor. Local 243 is losing jobs to robots and transfer of work to Mexico, said Ray Pompano. Their company, Sargent, is now owned by Assa Abloy, a multinational giant in the lock industry. Scott Slawson spoke about the fights waged by Locals 506 and 332 against GE moving UE work to low-wage non-union plants. Fred Harris, Local 601, also spoke for the resolution.

Jeanette Gabriel, Local 896; Senowa Mize-Fox, Local 203; and Kevin Yancey, Local 150, spoke for the resolution “Stop the Dismantling of Public Education.” Elizabeth Jesdale, Local 203, spoke on “Build Union Co-ops for Economic Justice.” Senowa Mize-Fox, Local 203, proposed an amendment to the resolution “Support the Family Farmer” to strengthen UE’s support for rights of farm workers. The changes and the resolution were approved by delegates. Delegates approved without discussion the resolution “Workplace Struggles”, as well as a packet of resolutions distributed earlier in the week. These included “End Discrimination Based on Sexual Orientation and Gender Identity”; “End the Cuban Blockade”; Promote Rail Transportation”; “Protect Our Planet for Future Generations”; “Protect the Rights of Healthcare Workers”; “Stop the Ten-Hour Day”; “UE Retiree Committees: A Wealth of Experience.”