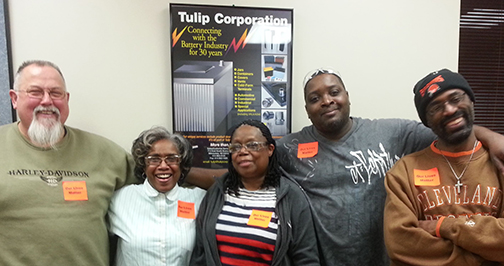 UE Local 1135 ratified a new four year contract with the Tulip Corporation on December 22 after a contract campaign that included membership mobilization and a vote to strike.  The battle became heated over raises and health insurance as well as fair treatment in the workplace.  The auto parts company committed several unfair labor practices (ULPs) during bargaining, including unilaterally changing the health insurance.

In their battle to win wage increases and improve the affordability of health insurance, workers wore stickers, signed petitions and marched on the boss’s office twice.  After turning down the company's final offer on December 10, workers voted to authorize a ULP strike, the first strike vote in the local’s 20-year history. Inspired by the Black Lives Matter movement that emerged over recent instances of police violence against African Americans, Black, Latino and white workers wore stickers and signed petitions that said “Our Lives Matter.”

These were the first contract negotiations since Tulip was bought by an investment firm more than a year ago, says Local 1135 President Shirley Harrison. “Since I’ve been in on every contract we’ve had, I’d say that this was one of the toughest, outside of the first one.” The local was organized in 1993 and Harrison has been president since then. “I would say never underestimate your people when they know what’s at stake, and they really came in, they came through for us. They understood that this was the first time we negotiated with this company, and if we didn’t get them to move on something this time, we probably wouldn’t get them to more on the next contract. We knew that if we stood united we could get, not all, but some of the things that we wanted to achieve, and that’s what we did. In past years we didn’t have much participation from the skilled people, but we got that participation this time.”

“We had an unscripted meeting with the top management guy here,” Harrison adds, “because we went to deliver a petition and he turned it into a meeting and the members got to tell him how they felt. So I think we did pretty good.”

After the membership voted to strike, management met with the committee in a final effort to avert a walkout. The company increased its wage offer and put up more money for health insurance. The union and company were then able to arrive at a tentative agreement. The members ratified a contract with $1,600 bonus in the first year, a 2 percent raise with a $250 bonus in the second year, and two 2 percent raises in both the third and fourth.

Historically, Tulip contributed less than one-third of the cost of monthly health insurance premiums, and as a result less than one-half of the bargaining unit had coverage. But in this contract the company will offer a single coverage option in which each worker will pay no more than 9.5 percent of her or his annual wage. This is based on the Affordable Care Act’s definition of “affordable coverage.” The employer also increased the monthly contribution towards employee plus spouse, employee plus child or children, and family coverage. Union members made gains in seniority, health and safety and other working conditions as well.