Another Back Pay Win for Republic Windows Workers, Result of 2008 Plant Occupation 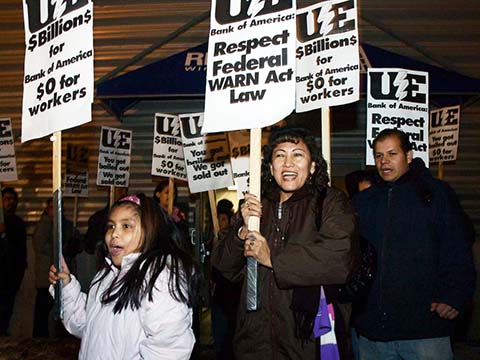 The National Labor Relations Board (NLRB) announced Wednesday that it will distribute $295,000 in back pay to the 270 workers, as a result of Republic’s unfair labor practices. The NLRB says the company illegally failed to negotiate with the union over the effects of the 2008 closing. The payout was approved by the bankruptcy court; Republic has been in bankruptcy proceedings since it closed the plant in December 2008.

"Because of our struggle workers continue to win and the proof is in this settlement payment,” says Armando Robles, president of Local 1110 and now a worker-owner of New Era Windows Cooperative. “It may have taken years, but we won what were are owed. This will help a lot of workers."

Despite the obstacles presented by the company’s bankruptcy, the union steadfastly pursued the legal case against Republic before both the NLRB and the bankruptcy court. UE argued before the bankruptcy court in 2012 that under legal precedent, the workers are entitled to at least two weeks’ back pay. That argument has finally prevailed, and the former Republic workers will receive their checks in the next few weeks.

Workers occupied the Republic Windows factory in Chicago’s Goose Island neighborhood on December 5, 2008 after the company gave only three days notice that it was closing. On the day the plant was to close, the workers refused to leave,  demanding money they were owed, including 60 days pay because the company had violated the federal WARN Act requiring 60 days notice of a plant closing, plus workers accrued vacation pay. Their demands were directed not only at Republic’s owners but also at Bank of America, whose cutoff of Republic’s line of credit had precipitated the closing.

The sit-down came just weeks after the $700 billion federal bailout of the Wall Street banks whose reckless greed had crashed the economy (in which Bank of America received $25 billion in taxpayer funds.) So the slogan of the occupation, and the movement that sprang up in support of the workers, was, “You got bailed out, we got sold out.”

Demonstrations in support of the UE members sprang up quickly at Bank of America branches across the country, and the sit in received labor and political support (including from then President-elect Obama) and massive media attention, almost all of it favorable to the workers. Faced with a public relations disaster, the bank eventually agreed to pay a $1.75 million settlement with the union. With this victory, the occupation ended on December 10, and nine days later workers received their checks.

Within months the plant reopened under a new owner, Serious Energy, largely because of the attention the workers had received because of the occupation. Vice President Joe Biden attended the grand opening in April 2009 and called it “a big deal.” But with the housing market still weak, the market for windows and doors also remained weak. Serious did not do well, and in February 2012 the new company announced that the plant would close again. The workers sat in again, this time for just 12 hours, and won a commitment from the company to keep them employed for another three months and sell the plant to a new operator, possibly to the workers.

After the closing of Serious, a group of Local 1110 members set out to restart manufacturing windows and doors as a worker-owned cooperative. New Era Windows held its grand opening in 2013. The business has become a success and is now entering its third year.