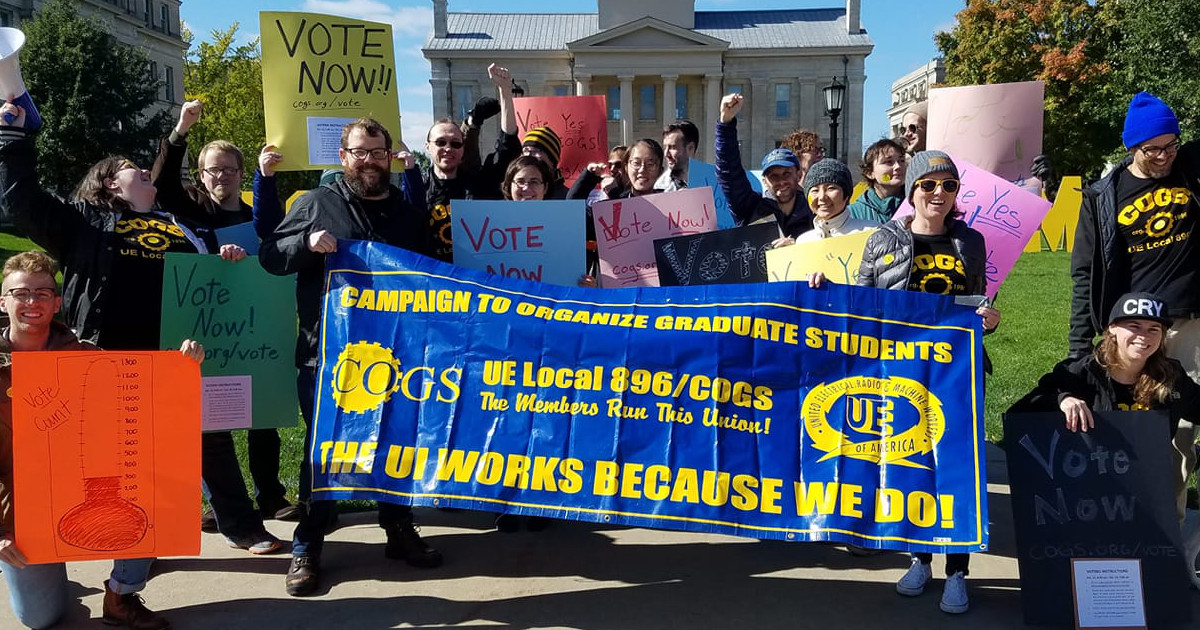 UE Local 896/COGS members rally to urge graduate employees at the University of Iowa to vote to recertify their union
October 30, 2018
Iowa

UE members in Iowa delivered a massive rebuke to the Republican politicians who are trying to de-unionize Iowa's public sector, voting to retain their unions by well over 80 percent in seven bargaining units covering over four thousand workers.

“This sends a strong message to Governor Reynolds and the Republican Iowa state legislature that we won’t stand down while you attempt to take away our long hard won rights and benefits,” said Local 893 President Becky Dawes. “We are here to stay!” Local 893 is an amalgamated local representing state social workers, state scientists, and county and school district workers.

The elections also energized graduate employees at the University of Iowa represented by Local 896-COGS, said President Laura Szech. “All of a sudden we just shifted to everyone talking about the election; people were coming up to us to ask how they could help.”

The “recertification” elections were mandated by Iowa's draconian “anti-collective-bargaining” law, passed in 2017 by Republican legislators. The law requires all public-sector unions to hold these elections, at their own expense, before every round of contract negotiations. To make the elections even more difficult, a majority of the entire bargaining unit (not just of those voting) must vote to retain the union.

The Iowa locals now face the challenge of bargaining new contracts under the new law, which only compels employers to bargain over wages and forbids collective bargaining over healthcare and many other benefits. Remaining topics such as time off, grievance procedures, and non-discrimination clauses are now “permissive” subjects of bargaining — making it especially important for public-sector workers in Iowa to put someone more worker-friendly in the Governor's office in the mid-term elections on Tuesday.

“The bargaining unit members of 893 know that we still have a hurdles to clear, with the next one being changing the face of the Governor's seat and the legislature to ensure that all people in Iowa are served and not just the special interests,” said Dawes. “The heart and soul of Iowa are at stake. As always, we are up for the challenge.”

“The Republican lawmakers clearly did not want the recertification election to be beneficial to us,” added Szech, “but it totally was.”

“I want to thank the ROCS [Recertification Organizing Committees], members and staff for their commitment and dedication to make this happen,” said Dawes. “They worked long and hard to make this successful.”

​NOTE: This article was updated on 10/31 to include quotes from Local 896 President Laura Szech