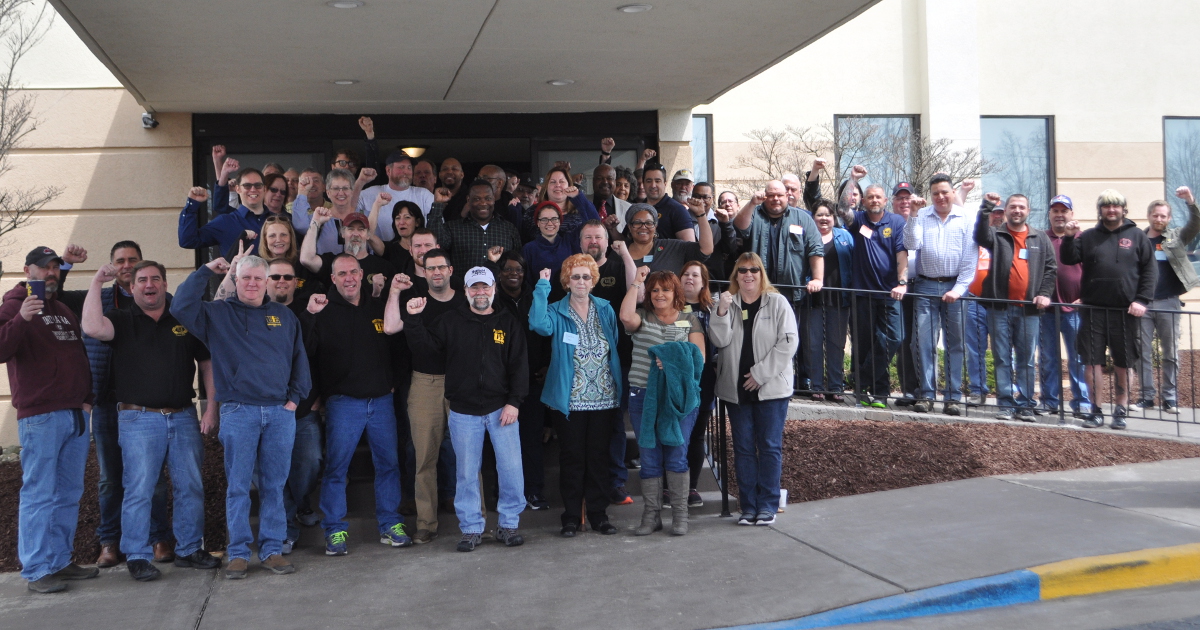 Delegates from UE Local 150 and 170, statewide locals that represent public-sector workers in North Carolina and West Virginia, respectively, gave detailed reports on organizing and labor solidarity in their respective states.

Local 150 President Nathanette Mayo gave an overview of the campaign to organize municipal workers throughout the state that Local 150 has launched to commemorate the 50th anniversary of Dr. Martin Luther King, Jr.'s assassination while supporting striking Memphis sanitation workers. She noted that when Greenboro city workers’ chapter president Charles French spoke at the MLK commemoration at the Civil Rights Museum in Greensboro, he “was the person who talked about not only holding up the commemoration but putting boots on the ground and feet in the community and organizing workers throughout North Carolina.”

Mayo reported that the Local 150 chapter for Durham city workers has helped launch the Durham Workers’ Assembly, which is working on "a vision for the whole city of Durham, where Durham can set standards for workers throughout the state" in terms of wages, working conditions, housing, sexual harassment, discrimination and other workers’ issues. She also spoke about the union’s participation in the annual “Historic Thousands on Jones Street” action at the state capitol in Raleigh, Raleigh city workers’ efforts to pressure their employer to take health and safety issues seriously after three city workers were robbed at gunpoint, and the new graduate worker chapter at the University of North Carolina’s “grade-in” to bring attention to grad worker issues and weekly sit-ins to demand the removal of “Silent Sam,” a confederate monument on campus.

Local 170 members reported on how the recent strikes by teachers, and united struggle by teachers, state workers, and other public workers, has resulted in a five percent wage increase for all public workers, the largest they have seen in 28 years. Local 170 President Jamie Beaton emphasized that the West Virginia teachers’ strikes were driven by rank-and-file teachers. “Their union bosses told them to go back to work, and they said ‘hell, no!’” — instead holding out for legislation giving all public-sector workers five percent raises. The teachers’ strike also defeated legislation that would have stripped them of seniority, established charter schools, and eliminated payroll deduction. Local 170 had victories of their own to report: legislation passed the state house that would have privatized or shut down seven state hospitals, but Local 170 worked with a Republican in the Senate to successfully kill that bill.

Local 506 President Scott Slawson reported to delegates about the North American Solidarity Project that UE is launching with Unifor, and the establishment of a global trade union network of General Electric unions. “It’s been a great thing,” he said, to be able to talk with GE workers from around the world about the prospect of worldwide collective bargaining with GE. Sometimes, he said, “we look to the workers in Mexico and say they're the reason” U.S. workers are facing layoffs, but he emphasized that “It's not the guy who's building the same product you're building” that is the problem. “The problem is the government, the corporations. Never lose sight of that.”

Bonita Johnson, Local 150, spoke about her participation in the Labor Notes Conference in early April. She described participating in workshops on how to march on the boss(es), using just cause, bargaining for healthcare in the era of Trump, secrets of a successful organizer and “Creative Organizing and Strategic Mischief.” In the workshops, she said, “We learned practical organizing [ and ] engaging our members in taking action and getting involved, which is basically the principles we use every day.” Johnson was also a panelist on the workshop “Bargaining Without Collective Bargaining,” where “we talked about how we organize and fight in the working conditions where collective bargaining is currently illegal but yet we accomplish gains.” In addition to workshops, Johnson also got a chance to watch At the River I Stand, a film documentary about the 1968 Memphis sanitation workers’ strike.

In shop reports, a common theme was the challenge and necessity of getting newer, younger workers involved in the union in order to maintain unity, and the importance of maintaining UE’s traditions of rank-and-file trade unionism. Local 123 President Wesley Henshaw, shared how excited he was to attend his first regional meeting and reported on his local’s successful work to get an abusive supervisor fired. “Hopefully we can help out a sister union here and there” by sharing their experience, he said. Karen Rizzo, Local 613, reported how new officers in her local had reached out to the national office for advice and “it was nice to get our national officers to have a conversation with our local officers to give a bit of history, history of the philosophy of UE.” Local 610 President Antwon Gibson described how his local had invited retired Local 610 Chief Steward Kent Buckholz to a local meeting to share some of the local’s history. "Some of the struggles they had back then are the same struggles we have right now," Gibson commented.

General Secretary-Treasurer Andrew Dinkelaker gave a presentation about the national union’s finances and plans for the future.