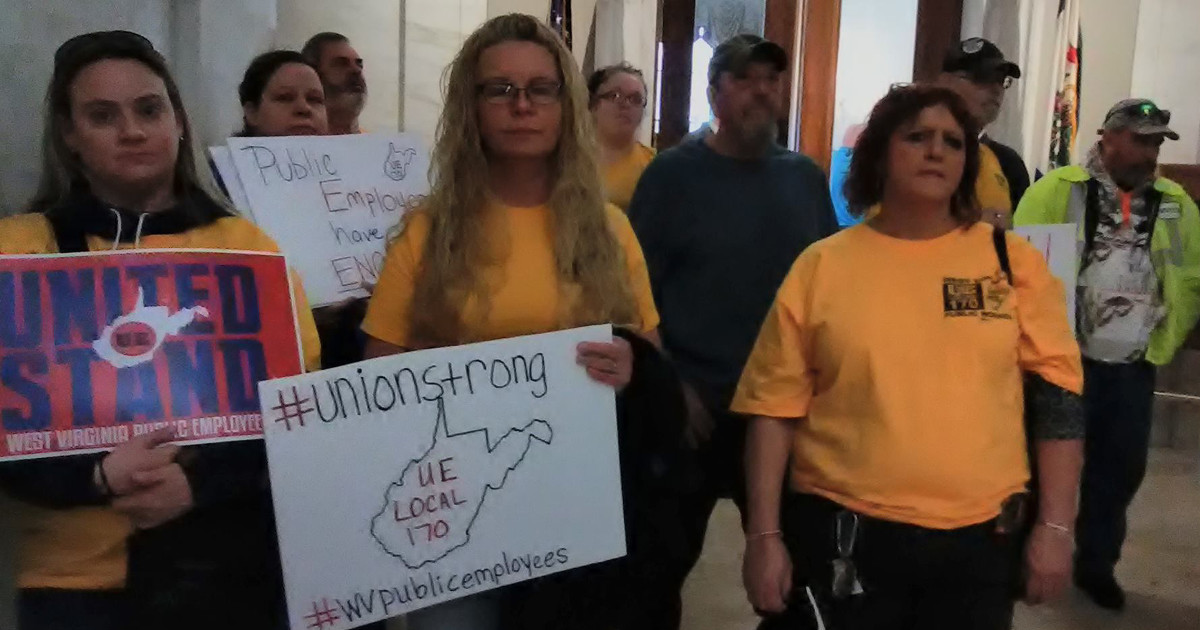 While West Virginia’s teachers were making history and inspiring working people around the world with their nine-day strike, state workers, members of UE Local 170, also notched up their own victories this spring.

The Republican leadership of the state legislature proposed a major reorganization of the Department of Health and Human Resources (DHHR), which employs a large segment of Local 170’s membership. Local 170 President Jamie Beaton and Eastern Region President Donna Morgan met with DHHR Cabinet Secretary Bill Crouch in November to discuss their concerns about privatization and reorganization.

The draft bill reviewed by Local 170 before the beginning of the session would have divided DHHR into four separate cabinet-level agencies and given the current DHHR secretary a free hand to privatize any DHHR functions prior to implementing the reorganization.

After much lobbying by Local 170 members, the bill that came out of the committees in the House of Delegates and was sent to the Senate gutted the privatization provision and reduced the dismantling of DHHR from four to two components, principally due to the cost of fragmenting the agency. The bill was then killed in the Senate by Senator Randy Smith (R).

Local 170 also drafted and secured the introduction of legislation that would revitalize aging facilities at Hopemont and Jackie Withrow Hospitals. The bills called for the construction of new buildings and incorporating both long-term care nursing homes and opioid-addiction treatment centers. Neither bill made it out of committee and onto the floor before the deadline to cross over for consideration by the full legislature, but they will both get automatic reintroduction in the regular 2019 legislative session.

Local 170 held their annual Presidents’ Day rally on February 19th, in the rotunda of the state capitol. Joe White, the executive director of the West Virginia School Service Personnel Association, which represents support staff in West Virginia’s schools, pledged WVSSPA’s support for state workers. “We will fight the fight as long as it takes. We will march as many miles as we need to march. We will stand beside you arm in arm, shoulder to shoulder and hand in hand and make the difference.” Warning that politicians will often try to divide different groups of public workers, he reminded UE members that “We are all brothers and sisters together. We must all stand as one.”

State Senator and candidate for U.S. Congress Richard Ojeda told UE members that he had introduced a bill to tax the natural gas being taken out of West Virginia in order to fund public services. He told UE members, “You guys are absolutely important and we have got to figure out how we can do better for you.” Addressing the poverty-level wages many public employees are forced to subsist on, he said “I can guarantee you a lot of these people in this building right here would not work for what you get paid. You stand strong,” he concluded. “We are starting to show people what union means in West Virginia. This is a war and you're going to win it.”

They then proceeded to march to the governor’s office and chanted for 20 minutes, demanding a meeting to express their concerns. The current governor’s administration has not met with Local 170 leadership since taking office in January of 2017. Although the governor himself was out sick, his chief of staff agreed to meet with Local 170 President Jamie Beaton and a small delegation of UE leaders for about an hour, during which Local 170 impressed upon him their demands for pay raises for state workers, fixing the Public Employees Insurance Agency (PEIA), access to organize in public hospitals and collective bargaining rights for public employees.

Three days later, West Virginia teachers and school support staff walked off the job, starting a historic nine-day strike that won wage increases not only for teachers and school workers but also for state workers. Local 170 President Jamie Beaton reported in his legislative summary to Local 170 members that this strike was different from the 1990 teachers’ walkout because it was driven by the rank and file, and also because “non-teaching school personnel affiliated with the independent West Virginia School Service Personnel Association (WVSSPA) are involved in the wildcat strike. WVSSPA had initiated contact with Local 170, finding that our situations and interests are very compatible … This promises to be a long-term and mutually beneficial relationship, well past the current strike.”

Throughout the strike, UE members joined solidarity rallies, and when the strike was over, Local 170 expressed the gratitude to the striking public school personnel and teachers who insisted that state employees receive the same 5 percent pay increase they had won for themselves.

“We are grateful to the determination and solidarity shown to us by our fellow public workers,” said Beaton in a press release issued by the local. “Coupled with the commitment to secure full funding for PEIA, the action of school district employees represents an historic milestone.”

“For too long the politicians have tried to pit the interests of school employees against state workers,” added Beaton. “From now on, both county school and state employees will act together to advance the working conditions that we have in common. Fixing wages and health benefits will no longer be deferred by dividing us, and we have the rank and file members of WVSSPA, ATF-WV and WVEA to thank for changing the game.”

On April 7, Local 170 held a very successful candidates’ forum. Close to three dozen candidates for delegate and state senate came to share their views on unions and state employee issues. Local 170 Vice President Leslie Riddle said a common theme of most candidates’ remarks was how badly the state government was treating state employees, and that it doesn’t matter what party you are, “if we don’t start doing something, West Virginia is going to be in even worse shape.” She also noted that there were a lot of women candidates, and some very young candidates.

Local 170 has also been actively organizing new members, visiting workplaces including Department of Highways garages, hospitals and offices run by the Department of Health and Human Resources, and WorkForce and Department of Motor Vehicles offices. “People are thrilled that we are showing interest,” says Riddle, who participated in many of the organizing visits. ”They were very very glad we came, they signed up ... they feel like [the union is] needed.”

The teachers’ strike has given public workers a sense of hope, says Riddle. “For the most part, I think everybody was very impressed that we finally stood together and fought back, basically, which hasn't happened on a very long time.”

Videos from Local 170’s Presidents’ Day rally and solidarity rallies can be found on the local’s Facebook page at facebook.com/uelocal170/videos.