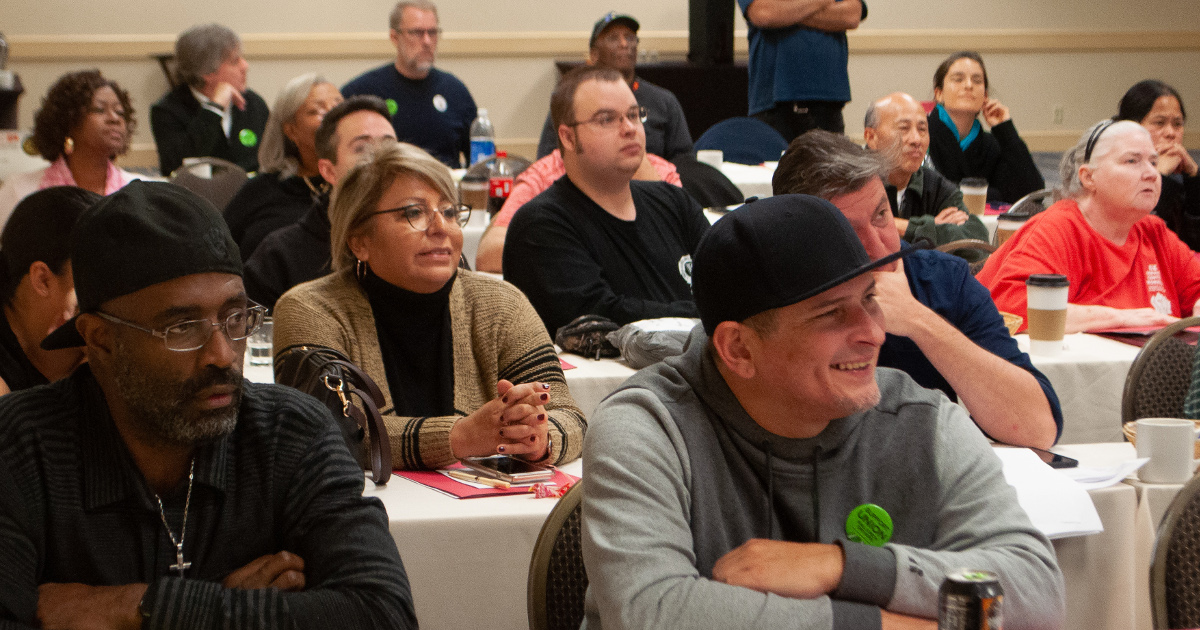 On October 27 and 28, Western Region delegates from Indiana to California met to discuss the upcoming midterm elections, new organizing, and shop-floor struggle.

“If the world seems topsy-turvy and you’re not sure who’s in charge, that’s because you are right,” said Western Region President Carl Rosen in his presidents’ report. “The ruling-class consensus that for decades largely left the same corporate behemoths making the key economic decisions in our country regardless of whether Democrats or Republicans were in office, has largely broken down,” he said, leading to both the ascendancy of Donald Trump in the Republican Party and the increasing power of Bernie Sanders and his pro-worker allies in the Democratic Party.

“But saying that the old corporate consensus is no longer in charge doesn’t mean that good people with good intentions and some level of competency are instead,” continued Rosen. “Donald Trump’s administration is motivated by his own personal self-preservation and greed combined with taking care of the agenda of some of his closest advisers and a few corporate cronies that have been especially good to him.”

Turning to the upcoming midterm elections, Rosen told delegates “it is really critical to try to remove the House of Representatives from Republican control,” noting that at times that means needing to vote for less-than-stellar Democrats in order to block the Republicans' extreme anti-worker agenda. The region voted to endorse the Democratic ticket of Tony Evers and Mandela Barnes for governor and lieutenant governor of Wisconsin, and Democrat Abby Finkenauer for Congress in Iowa, all of whom were elected in November.

The Western region also made two endorsements in Chicago’s alderman (city council) elections, which will be held on February 26, 2019: Mike Rodriguez in the 22nd Ward and Hilario Dominguez in the 25th Ward. Both are part of a long-term independent political organizing effort that UE has been involved with for years.

Local 1107 Vice President Joni Anderson reported that she has been elected to the Wisconsin state board of Our Revolution, the organization formed to continue the “political revolution” of Bernie Sanders’ 2016 presidential campaign. Anderson was also invited to speak at “Fighting Bob Fest,” an annual gathering of progressives in Wisconsin. Stressing the importance of aggressive workplace struggle, she “talked to them about why we fight the boss, why I got involved in union organizing.”

Local 893-IUP President Becky Dawes reported on her local's work to win the "recertification" elections imposed on them by anti-union laws passed by Republican majorities in 2017, in which public-sector unions have to win an absolute majority of the bargaining unit (not just of those voting) prior to every contract negotiation. “I am very, very, very proud of the membership and the ROCs [Recertification Organizing Committees],” said Dawes. “Everybody stepped up.” Her local talked face-to-face with bargaining unit members, sent mailings, and built a “massive movement” among state workers for recertification. “I see a momentum that we haven't had for a long time,” she said.

Local 896-COGS President Laura Szech was unable to attend the council meeting but recorded a video report. She explained how her local was using newsletter and social media to distribute speakouts about why the recertification was important “so that people would see the faces of their colleagues.” (See “By Large Margins, Iowa Workers Vote to Stay UE” for how UE won those elections.)

Local 1107 President John Becerra reported that his local is entering the third year of their contract, which finally eliminates the two-tier system forced on them in 2009. Becerra reported that he is “so proud” that now “everyone in our shop makes the same amount of money.” Vice President Joni Anderson reported that the local has been fighting for a member who was not allowed to use personal leave to deal with her husband’s illness and death. “We had a lot of floor action” around that grievance, she reported. (See photos of the floor action on UE's Facebook page.)

Local 1135 President Malik Grant and Local 1139 Financial Secretary Mike Plachy told delegates about ongoing contract negotiations in their shops. Local 1137 President Carmine Ziccarelli reported that his local has been dealing with a grievance around an improper discharge of a long-term member. Local 1004 Recording Secretary Ashley Clemons shared how her local has been reaching out to members through meetings in the cafeteria and a mid-contract survey. “We hope to end out the year with getting more members active and involved in our local as the hospital goes through the changes of opening a new tower and bringing in new management.”

Local 1177 President Larry Hopkins and Local 1077 President Laura Johnson and Vice President Malissa Gollaher reported on several grievances and ongoing national negotiations with Hallcon. “The company this last time came back with a little bit of a money proposal,” Gollaher noted, after UE members held banner actions at their workplaces and held a rally outside a railroad industry gathering in Chicago (Hallcon workers drive rail crews to and from trains).

In Rosen’s report on the economy, he noted that “we are starting to see wages at the lowest end of the scale finally coming up” and that “unemployment is low now but a recession is likely on the horizon.” He urged locals to “strike now while the iron is hot, fighting for the best wage increases you can if your contract is up soon and even if not, consider pushing your employer to offer extra mid-contract pay increases if they are having trouble hiring for vacancies.” Justin Mikel, Local 770, Jay Jamesson, Local 1121, Sharry Niedfeldt, Local 1161, and Tim Holmberg, Local 1187, all confirmed this in their shop reports, saying they are seeing high turnover in their shops because other companies in the area are being forced to offer competitive wages by the relatively tight job market.

Victoria Hilton, Local 808, Juliet Duata, Local 1008, Delores Buckner-Phillips, Local 1118, Crey Gallagher, Local 1160, and Jesus Rodriguez, Local 1172 all said younger workers in their shops were showing increased interest in the union. Young workers are asking “How do I be a steward? How do I protect others?” said Hilton.

Organizing for Control of the Workplace

International Representative Mark Meinster introduced the Organizing Report with some brief remarks on why we organize. Noting that wages have stayed flat while productivity has risen, he reminded delegates that “in our system, profits come from exploitation of our labor.” Our rights, he said, “are protected by our ability to control the workplace, and to engage in aggressive struggle to improve our conditions.” He then introduced three groups of workers who have recently organized with UE.

Magaly G. Sevillano and Karina Cruz of UE Local 1018 reported on their ongoing struggle for a first contract at the Frank Lanterman Regional Center in California. “I could give my whole life to work with my clients, but management is not doing their job,” said Sevillano. Instead of working with workers to improve services, management is creating obstacles for the bargaining committee.

Local 1123 members Harvey Edwards and Ashley Braxton told delegates about their successful struggle for a first contract at MTIL, a warehouse in Illinois where workers wash the reusable plastic crates used to transport produce to major grocery retailers including Walmart and Target.

Hallcon workers Cheri Shaw and Alisa Mastenbrook explained why they, along with 650 other Hallcon workers, left a corrupt company union to join UE in August. “When we found UE it was like a miracle,” said Shaw, noting that the previous union didn’t care about health and safety issues. The new UE members work in eight states; Shaw is from Colorado and Mastenbrook is from New Mexico.

The newly-organized workers will join the thousand Hallcon workers across the nation already represented by UE Locals 155, 716, 1077 and 1177, and UE has formed an alliance with the unions that represent workers at Hallcon’s main competitors. By bargaining together with unions representing 90% of the market, workers hope to make big gains in wages and benefits in this contract. “We’re ready for battle,” said Mastenbrook.

Delegates also discussed and adopted the Anti-Harassment Principles, Responsibilities and Procedures passed by the General Executive Board in August. Victoria Hilton, Local 808, said “unions can step forward and help lead everyone” in addressing harassment, and Rosen reminded delegates that as union members “we learn how to get along with each other because if we don't the boss will eat us alive.”

Laura Johnson, Local 1077, gave a report on Western Region participation at the Labor Notes conference in April. Joni Anderson, Local 1107, added that she was particularly inspired by the participation of West Virginia teachers who led the statewide strike last winter, a reminder that “It's our labor to give and our labor to take.” Jesus Rodriguez, Local 1172, reported on the Wisconsin subregional training held in May. Bryan Martindale, Local 1421, spoke about his participation in the Labor Network for Sustainability’s convergence in Los Angeles in July, and the importance of labor being proactive about addressing climate change. 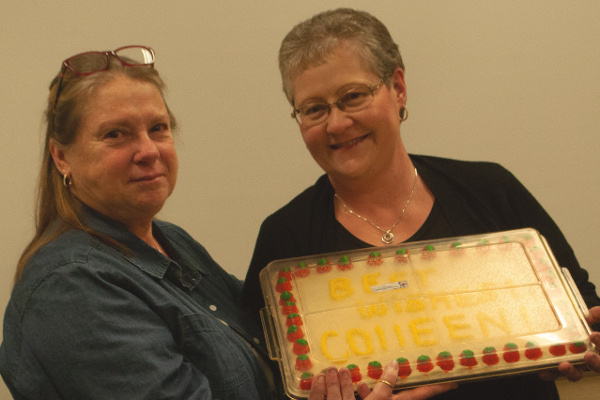 Delegates also took time to honor UE Local 893-IUP leader Colleen Bochmann, who is retiring. She shared with UE members that she grew up in a union family and joined her first union when she was 21 years old. “I watched my family go through strikes,” she said, “I watched the union come in and help us.” Bochmann worked for the State of Iowa for 39 years.

More photos from the Regional Council meeting are available on UE's Facebook page.