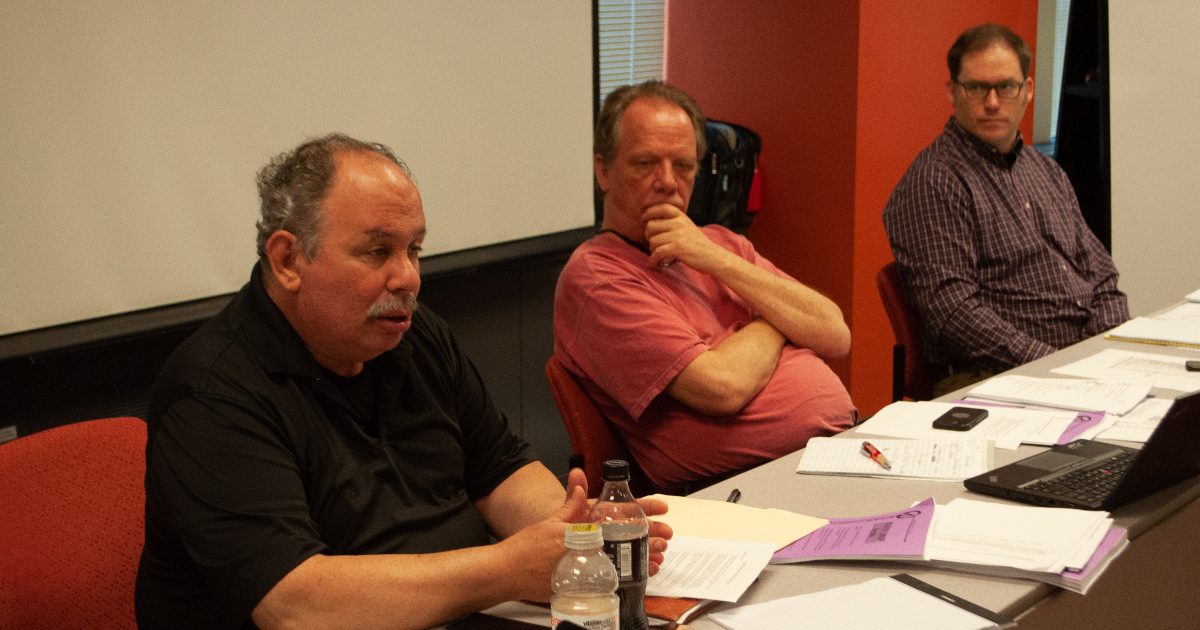 Director of Organization Gene Elk addresses the board, while General President Peter Knowlton and Secretary-Treasurer Andrew Dinkelaker listen
May 13, 2019
Pittsburgh

UE’s General Executive Board met in Pittsburgh from May 8-10 to discuss and approve a budget for the coming fiscal year, review the union’s work, and prepare for the national convention in August.

The GEB consists of elected representatives from each of the union’s three regions, and is the highest governing body of the union in between conventions. The board spent much of this meeting discussing, debating and ultimately passing a budget that addresses the financial realities faced by the union while preserving UE’s ability to engage in aggressive struggle to protect and improve members’ working conditions.

Secretary-Treasurer Andrew Dinkelaker reported that the call to UE’s 2019 convention had been mailed to locals in April. GEB members reviewed the workshops, committee assignments, and arrangements for caucuses, conference boards and child care.

In his organizing report, Director of Organization Gene Elk informed the board that the union continues to bring in new union members at Hallcon under the “card-check” provision agreed to in the most recent national contract. He reported on negotiations for a first contract at Lanterman Regional Center, and on a successful drive to sign up new members into Local 170 in West Virginia. In June, he said, activists from Unifor will join UE members for an organizing blitz in North Carolina to use the fight for Medicare for All to build membership for Local 150. The blitz will also be an opportunity for Unifor activists to learn how Local 150 organizes public-sector workers who are barred from collective bargaining.

Elk also reviewed for board members an “ominous article” from Bloomberg Law indicating that the general counsel of the National Labor Relations Board is actively seeking to revive NLRB cases that were decided in the union’s favor. “This labor board is going back and trying to revive those cases so they can be decided against unions,” Elk said, warning UE GEB members that the Trump labor board intends to aggressively pursue charges against unions for “negligent behavior” when stewards or officers make small errors like forgetting to return members’ phone calls. He noted that the Trump NLRB is also working to overturn the “successorship” rules that maintain union recognition when a plant is sold to a new owner.

General President Peter Knowlton introduced two resolutions encouraging UE members and the labor movement more broadly to begin discussing the 2020 elections, and to get involved in shaping discussions around climate change. Discussing climate change, board members emphasized that changes are inevitable as our economy shifts from fossil fuels to renewables, and that it is crucial for UE and the rest of the labor movement to play an active role in shaping those changes to ensure that the living standards and benefits of displaced fossil-fuel and related workers are protected, and that displaced workers and workers from marginalized and front-line communities are given access to union jobs. (Update, 5/30: final versions of both resolutions were approved by the GEB over email on May 30).

The board discussed implementation of the anti-harassment policies and procedures approved by the GEB and all three UE regions last fall, and reviewed training materials for the ombudspeople who will be serving at the 2019 convention. They agreed to schedule an extra day as part of their January meeting for a full-day training for GEB members on equity and anti-racism, modeled on the training Unifor requires for its elected leaders.

The GEB also renewed UE’s annual donation to the Labor Campaign for Single Payer, reaffirmed affiliation with the global union federation IndustriALL, and voted to send a small UE delegation to the Labor Network for Sustainability conference in June in Chicago.