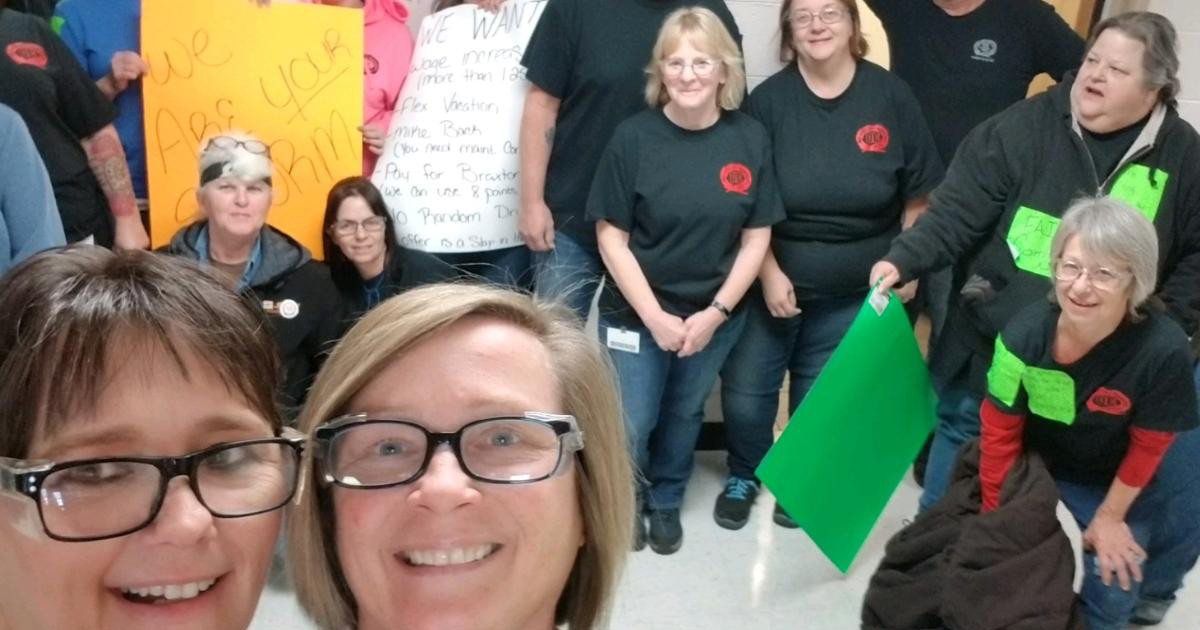 Everyone at Local 1107 knew that their upcoming negotiations with Freudenberg NOK would be a contentious fight, and preparations began many months before entering negotiations. Earlier in 2019, the company had unilaterally implemented a new drug policy which included adding random drug testing. The local had grieved this policy and had an arbitration date set for June 2020. Local 1107’s long-time leader and chief steward, Mike Bluell, was forced out on medical leave six weeks after he turned in new permanent restrictions from his doctor. For six weeks he was allowed to work with those restrictions until he got into an argument with his boss. That day, the company decided they could no longer accept his restrictions and that he would have to go on leave. The company dug in their heels even more in the months leading up to negotiations, refusing to settle even the most obvious grievances that the local filed. This meant that in addition to the regular scope of negotiations, the local came in proposing settlements to a number of grievances, Mike Bluell’s return to work, and a ban on random drug testing.

In the last three-year contract, Local 1107 members successfully fought to get rid of a tiered wage scale. To do this, 50 percent of the members received a 2.5 percent pay increase in the final week of the contract. The company came into negotiations using this wage increase as an excuse to offer zero wage increases in the first year — a proposal that the company had not moved away from with only a week to go until the contract expired.

The company also wanted to do away with the self-scheduling of 80 hours total vacation and personal time that members can use at a moment’s notice.

Throughout negotiations Local 1107 members wore t-shirts inspired by Local 506 with the words “The company whispers you can’t handle the storm” and “UE replied, WE ARE THE STORM.” The company said they felt the t-shirts were “threatening.” Members also wore buttons and stickers and covered their cars with signs in the company parking lots.

Heading into the final week of negotiations, nearly half of the members attended a local union meeting and voted unanimously to authorize a strike. During the final week, members from the second and third shifts showed up to negotiations with signs for the morning sessions, and members on the first shift marched on their boss at lunch, doing UE chants and demanding a fair contract. Despite the company’s lawyer’s assertion early in negotiations that UE members’ “shenanigans” would have no effect on the outcome of negotiations, it was only at the last moment, with members taking action and the expiration looming, that the company began making wage proposals that members could begin to consider as fair.

The final agreement is a three-year contract with wage increases of 2.5 percent in the first year, two percent in the second year, and three percent in the third year. There are no changes to vacation/personal day scheduling, a settlement was reached on a grievance removing a two-day suspension with back pay, and the company agreed to the union’s demands for no random drug testing. The union also worked with the company to create a new maintenance position that had long been a point of contention between the union and the company.

No agreement was reached regarding Mike Bluell. The company agreed to allow him to bid on a new position which is less physically demanding, but would not agree in negotiations to award him that job. Both parties agreed to enter mediation regarding the grievances and Americans with Disabilities Act charges pending regarding his case.