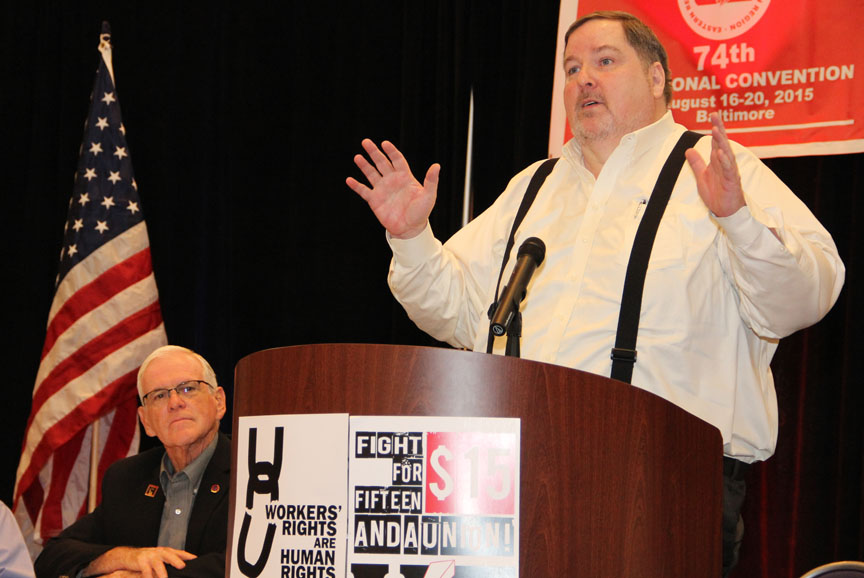 UE joins the rest of the progressive labor movement in mourning the passing of ATU President Larry Hanley earlier this month.

Hanley addressed UE's 2015 Convention, sharing with UE members his admiration for UE and gratitude to UE for publishing Labor’s Untold Story, which his union uses extensively.

Like UE, Hanley believed the labor movement should be concerned with all issues that affect the working class. Speaking to the UE convention, Hanley discussed the police shooting of Michael Brown in Ferguson, Missouri in 2014 which sparked the Black Lives Matter movement. The shooting of Brown occurred at a time when the St. Louis Transit Authority was using racism against the ATU local there, he said, trying to divide white mechanics from black drivers. This is institutional racism, he said.

Speaking on the 2016 presidential race, Hanley said “The only real energy has been for Bernie Sanders,” and warned that the labor movement must not be used to “shut down the only candidate who shares our values.” On the wars of the past 15 years, he said, “We would have no war if the politicians had been honest about how much it would cost the American people,” both in the trillions of dollars expended but also in the loss of lives of our troops.

Larry will be remembered by a lot of people for a long time. The members will mourn, and the employers will breathe a momentary sigh of relief. He was truly a trade union force of nature, the kind of leader largely absent from today’s staggered and dazed labor movement.

Larry Hanley saw his role as hell-raiser and revitalizer—not just a custodian of the union that he came to lead, but an agitator for more aggressive trade unionism on all fronts. If you ever met him, you remember him.