Local 1107 Retiree Running for State Senate: “I am running on a workers’ platform” 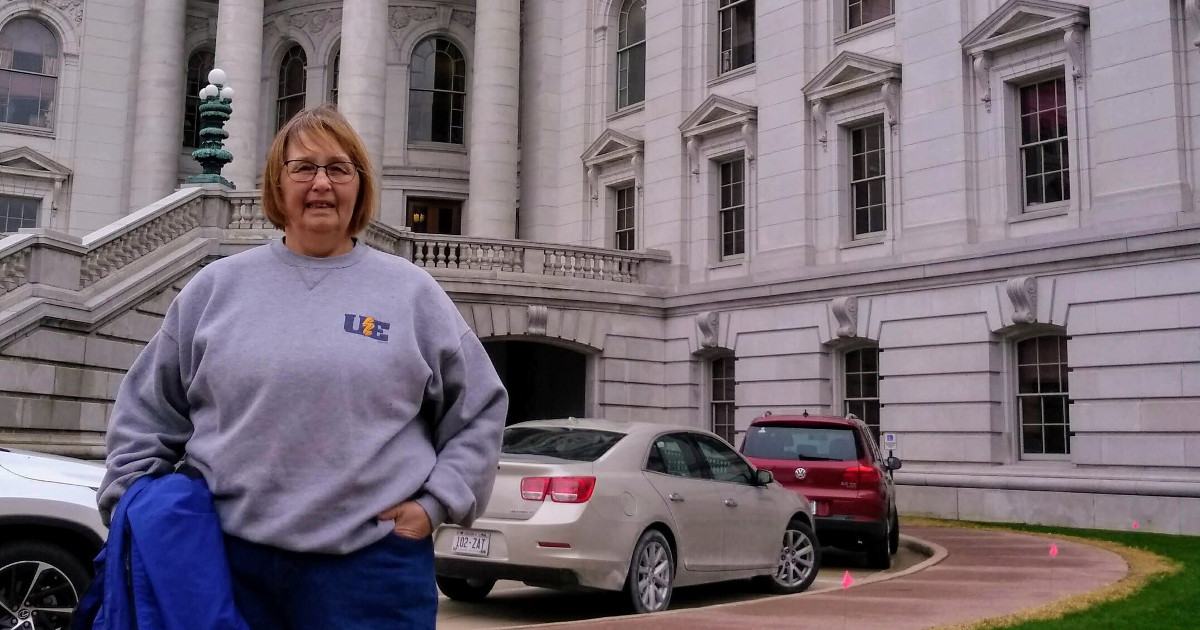 Joni Anderson, a recently-retired member of UE Local 1107 in Necedah, WI who served that local in many capacities over the years, is running for state senate in Wisconsin’s 14th senate district. Her pro-worker program includes workers’ rights, healthcare for all, and stronger democracy. Her website proudly displays a photo of Anderson wearing a UE shirt at the state capitol, and she has been endorsed by both UE’s Western Region and the Wisconsin State AFL-CIO.

The UE NEWS spoke with Anderson earlier this week. This excerpted interview has been lightly edited for clarity and brevity.

Anderson: I live in Adams, Wisconsin. I grew up in a little town called Spirit, on a little dairy farm. I graduated from Tomahawk [High School] and went to college in UW River Falls and graduated with a major in sociology and a minor in speech. From there I couldn’t find a job in what I went to school for, so I ended up working for minimum wage in restaurants, and eventually I found my way to a better job at what was then Farnum and it’s Freudenberg-NOK now. During that time I became a union member and helped bring UE into our plant. It’s just been an ongoing learning experience since then.

UE NEWS: Can you tell us about some of the issues you’re running on?

Anderson: I am running on a workers’ platform. It’s been a long time since our minimum wage has been increased, around 11 years or so, and I think we need a $15 minimum wage. Improving healthcare and making it accessible to everybody is an important part of my campaign. Especially with this pandemic that’s been going on, it’s become even more obvious why people need a universal healthcare system in this country.

The organizations that I’ve been involved with in the last few years — Our Wisconsin Revolution, Citizen Action — they all support a universal healthcare plan, specifically Medicare for All. Because you’ve got to have something that’s strong, that’s going to withstand the pressures of money and power. That’s what was really the weakness in the Affordable Care Act, it never got to that point. So then when the money and the pressure started coming, [opponents of the ACA] were able to develop some cracks.

We used to be a very progressive state in Wisconsin and we’re not anymore, we lag behind in a lot of different issues, including in different types of funding. The roads are so bad in some cases that you can hardly drive down them, there’s six-inch deep holes in them. You can easily put a tire out in that or do something else to the bottom of your car, you know.

We’ve been building prisons like crazy in Wisconsin in the last ten years, there have been like eight prisons built and one private one and there’s a couple of juvenile facilities being considered. This money could be spent on programs for alcohol and drug abuse and mental health. That’s one of the big reasons I support the legalization of both medicinal and recreational marijuana. We should be utilizing our tax dollars from this for programs to keep the people in our own state out of prison. (Rates of imprisonment in Wisconsin, as in most states, have grown dramatically in the last 40 years —Ed.)

UE NEWS: Your website photo is a very nice photo of you at the Wisconsin State Capitol, and you’re no stranger to Madison. Can you tell me about some of the times you’ve been to Madison in the past?

Anderson: One of my first experiences [at a UE Political Action Day], I was put together with [Local 1135 President] Shirley Harrison and we walked around the capitol looking for legislators to talk to. We happened to be walking by an open door and there was a legislator that wasn’t busy. He wasn’t one that we were supposed to be talking to, but he invited us in.

I was new, and it was the first time I was ever at the capitol for any type of union affair, and so we started talking about minimum wage and he made the comment that “there’s some people that don’t deserve to be paid a minimum wage.” If Shirley hadn’t been holding on to me, I’d have hit the roof because I couldn’t believe that we had legislators in Madison that would talk like that! So that was a good introduction to, you know, what goes on down in Madison.

UE NEWS: Can you tell me a little bit about what it’s like to run for state legislature?

Anderson: Well, it's been an interesting experience. I really, really have had a good time working with the county parties, the people that are volunteers, you know, that are trying to turn the state over. They’ve been very supportive of my campaign, both personally and financially. Now, the state party is a different story (laughs). I’ve had to work really hard to not allow them to control my campaign, or spend my campaign funds. I’m not running for the Democratic Party, I’m running to work to get the issues changed that need to be changed in Wisconsin for the people.

UE NEWS: Do you have any advice for any other UE members who might be considering running for office?

Anderson: I think they should do it, but I think they need to keep their eye on the prize and what they’re actually running for and what they want to see changed. Keep your eye on the prize and don’t let anybody control your campaign, so that it gets directed in a different direction than what you really want it to be. I think it’s really important that people, if they’re thinking about it, actually do it.

Learn more about Sister Anderson’s campaign at joniforsenate14.com and Joni Anderson for Senate 14 on Facebook.