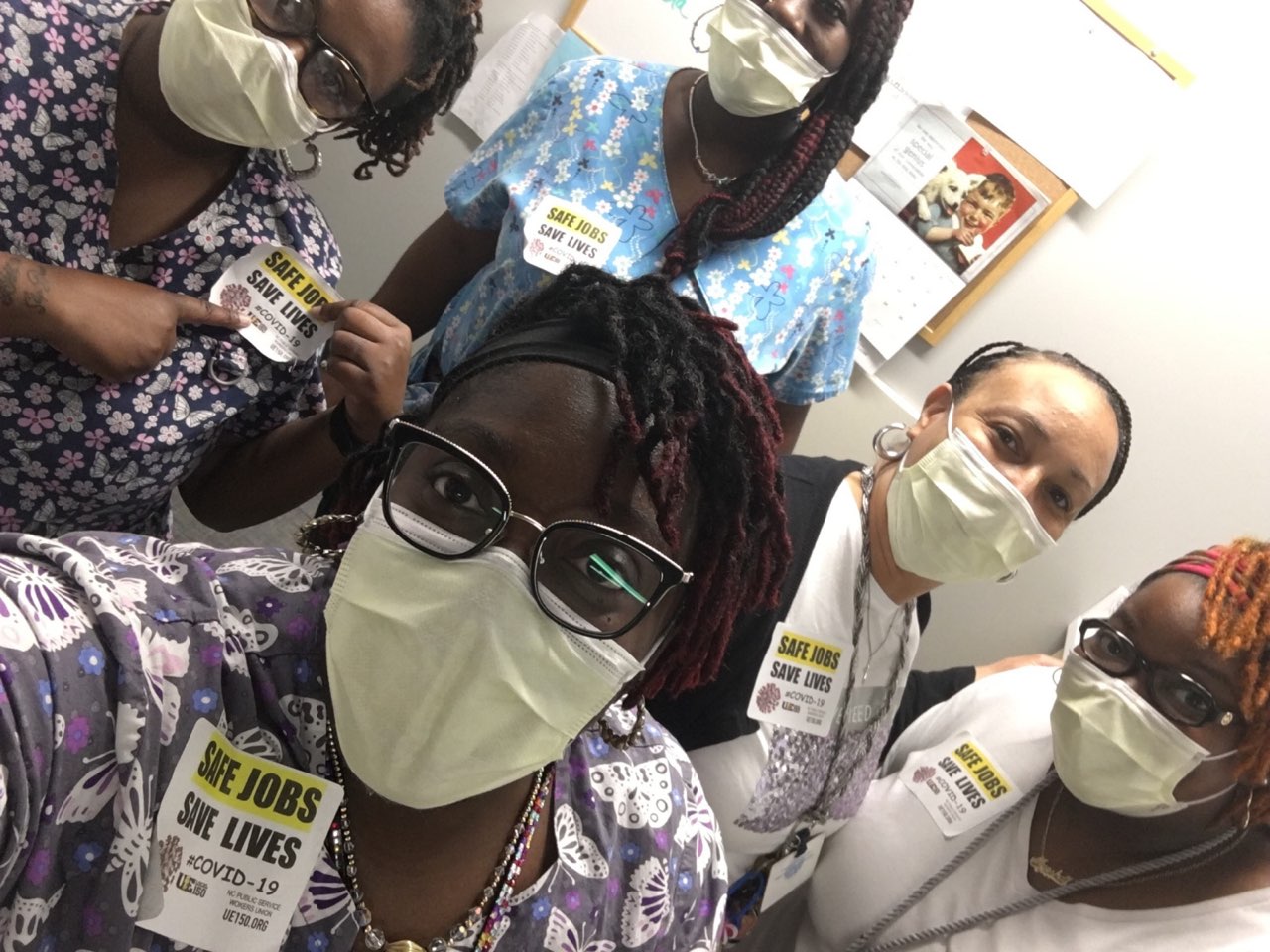 UE locals from coast to coast have been taking action to make sure workers’ voices are heard as decisions are being made which impact our health, our jobs, and our ability to provide for our families. The next issue of the UE NEWS will feature extensive coverage of local activities, but in the meantime we have put together a selection of press coverage that UE locals have received over the past month. (Not a UE member? You can still subscribe to the UE NEWS for as little as $5/year.)

UE Local 203, which represents co-op grocery workers at City Market in Burlington, Vermont, was featured in an article in the local alternative weekly Seven Days about grocery workers winning hazard pay. Local 203 secured a memorandum of understanding guaranteeing a $3/hour hazard pay differential, and numerous safety measures demanded by the local have been enacted by management. Local 203 Chief Steward Jake Green told Seven Days, “We hope that this agreement, which was reached very quickly due to an outpouring of community support, shows what unionized workers are capable of achieving, and serves as an example to other employers of how workers deserve to be compensated. Management made us fight for this victory, and we are proud of what we have achieved.”

UE Local 170 President Jamie Beaton published a guest column in the Beckley, West Virginia Register-Herald. “Ensuring safety and proper compensation for all those who work during this time is crucial,” wrote Beaton. “Making proper Personal Protective Equipment (PPE) and Hazard Pay available are just part of the approach needed. On Monday, April 6, the WV Public Workers Union, UE Local 170, sent a letter to Gov. Jim Justice with common sense demands for what working people need right now. ... Since we sent the letter, the state has made improvements regarding policy enforcement, safety standards, and distribution of PPE. We appreciate the measures taken so far by our state officials.” Local 170 represents state workers throughout West Virginia.

In Erie, PA, UE Local 506 has been working to ensure the safety of the more than 1,000 workers at the huge Wabtec locomotive facility, especially after the company disregarded a shutdown order from Pennsylvania’s governor in mid-March. “What I am most concerned about is the health and safety of the men and women who work in that plant,” Local 506 President Scott Slawson told the Erie Times-News. “If the coronavirus were to break out in there, that plant is a big facility. That plant is a community within itself.”

“We are trying to protect everyone, not just our members,” Slawson said. “This is going to become a bigger disaster if this thing continues to spread. Are you better off to shutter our plant for a couple of weeks, or are you better off to roll the dice?”

The Iowa City Press-Citizen covered a list of demands sent to the University of Iowa in mid-April by UE Local 896, which represents UI’s graduate workers. “The explosion of COVID-19 in the U.S. makes clear that access to health care is vital for the social and economic well-being of all, including graduate students and their families,” the local states. Local 896 has demanded that the university expand graduate workers’ health care plans to cover their families, and also provide health care options to undergraduate students who lack access to affordable healthcare.

In North Carolina, UE Local 150, which represents public-sector workers throughout the state, has been pushing cities, the state Department of Health and Human Services, and University of North Carolina campuses to provide adequate protection for essential frontline workers. Local 150 members also joined other healthcare workers in standing up to right-wing anti-lockdown protesters on Tuesday. “They’re putting me and my family at risk,” said Local 150 Vice President Sekia Royall, who works in nutrition services at O’Berry Hospital in Goldsboro. “My daughter and I both have pre-existing conditions, and if someone gets the virus at our facility, it will spread like wildfire. For some of our patients it could be fatal.”

Looking for resources to help your local fight for safety and fair pay? UE’s COVID-19 Information for Workers page is available at ueunion.org/covid19