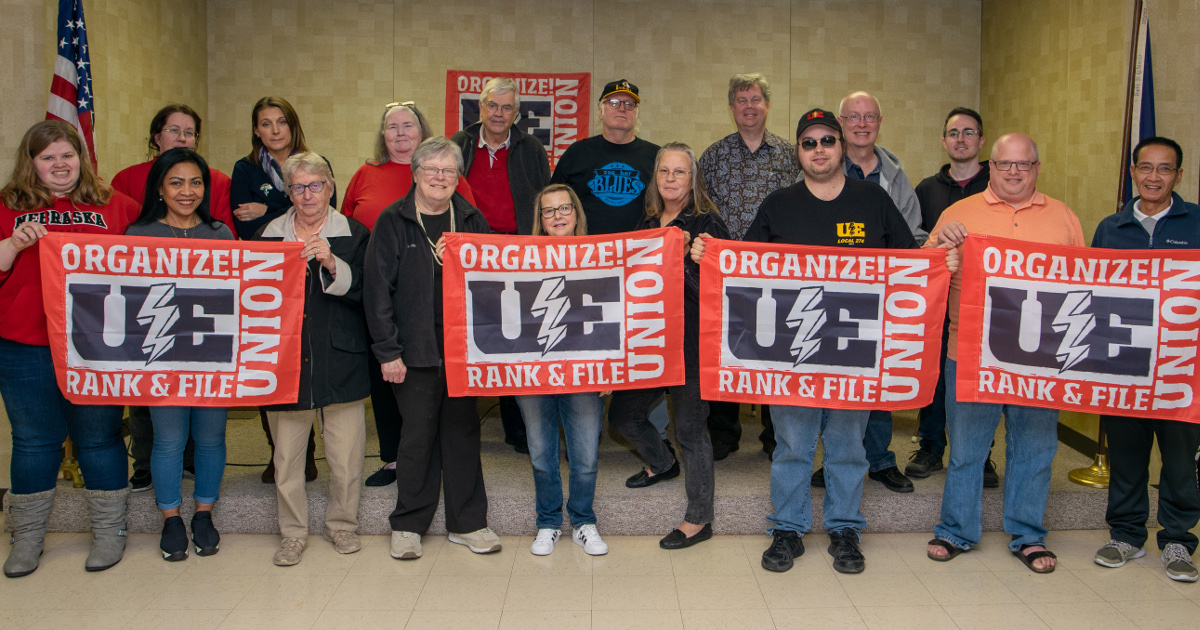 Workers at the USCIS Nebraska Service Center in Lincoln secured their second contract in June amidst unique and challenging circumstances due to an employer change and the advent of COVID-19. Local 808 comprises more than 350 workers split between three buildings which also house over 1,000 federal workers covered by the AFGE union. There, they provide crucial functions for the immigration system including data entry, processing, maintenance, and storing of applications and petitions. They are one of the major USCIS Service Centers in the growing constellation of UE sites including Laguna Niguel, California (Local 1008) and St. Albans, Vermont (Local 208). They also send work to the Kentucky Consular Center in Williamsburg (Local 728) and the National Visa Center in Portsmouth, New Hampshire (Local 228) for further processing.

Last fall when the Union received news that incumbent contractor Pacific Architects and Engineers (PAE) would remain their employer for the coming contract changeover, they got to work in setting up negotiations. The Union had been preparing for this moment for all of 2019, with contract surveys, membership meetings with record turnout, and late nights drafting contract proposal language. Finally, negotiations occurred during the second week of December 2019, with the committee consisting of Chief Stewards Victoria Hilton and Nancy Arensdorf, Member-at-Large Casey Schappaugh, Treasurer Dawn Meyer, and myself. UE 808 alumni and Field Organizer Zachary Knipe was on site to serve as the chief negotiator along with Field Organizer Jack Lasiter.

During negotiations, some of the company’s proposals included management control of break and lunch times, a quota system, and the bombshell: a coming layoff. Word quickly made it to the membership who responded by showing up to the negotiations in large numbers – making a show of strength to the company and a show of support for the committee. The Union reached a tentative agreement with the company on roughly half of the articles in the contract over a three-day span, but before work could start on the economic discussions, it was revealed to the Union that PAE had some disagreements with prime contractor IT Coalition, Inc (ITC) and it wasn’t certain whether PAE would remain on the contract in Nebraska. The parties ultimately set additional dates in January to reconvene in order to give the two companies time to work out their differences. However, by the middle of January it was announced that PAE would be vacating the contract and all workers would become ITC employees on February 3, 2020.

This represented a real challenge to Local 808. Not only does a change of employer wipe out any paid leave balances workers had earned, but it meant losing the very strong health benefits agreement that they had just begun with PAE for the year 2020. In addition, they were put in the very uncomfortable position of having to renegotiate the same articles again with a different company – who received copies of everything and knew what the Union was willing to accept ahead of time. Essentially, PAE gave ITC a head start on the process, allowing them to pick and choose which TA’s they would honor and which ones they “wanted to talk about.”

ITC’s negotiating strategy differs in that they only budget two days to negotiate a contract, which attempts to force the union to make many sacrifices. ITC proposed vastly more expensive health insurance plans and a wage freeze for the next year. The committee understood that some compromises would have to be made; however, they were not willing to sacrifice their core economic priorities. At the end of the two days and being nowhere near a complete agreement, the parties agreed to a contract extension and additional dates to negotiate within 60 days. The contract extension included the immediate implementation of several items, including a clean slate for discipline for all bargaining unit members.

At the following membership meeting in early March, big plans were made to begin ramping up floor actions. Signs were going up at workstations. New shirts and buttons were in the works. Rallies and marches were planned as the weather warmed up. Local 808 was ready to go back to the table at the height of their momentum in the first week of April.

And then, COVID changed everything.

Social distancing was implemented. Air travel was shut down. A number of employees began to isolate at home. The government relieved the contractor of timeliness requirements in getting work done. Uncertainty ruled the day. Ultimately, negotiations were not going to be possible, and the contract was extended again until the end of the summer. It was at this point that some started to feel discouraged. Workers felt that the coronavirus had done more than just make people sick; it had taken away their leverage, reduced their morale, and disrupted their organizing. Over the next couple of months workers in Lincoln, along with the rest of the world, adjusted to the new normal. 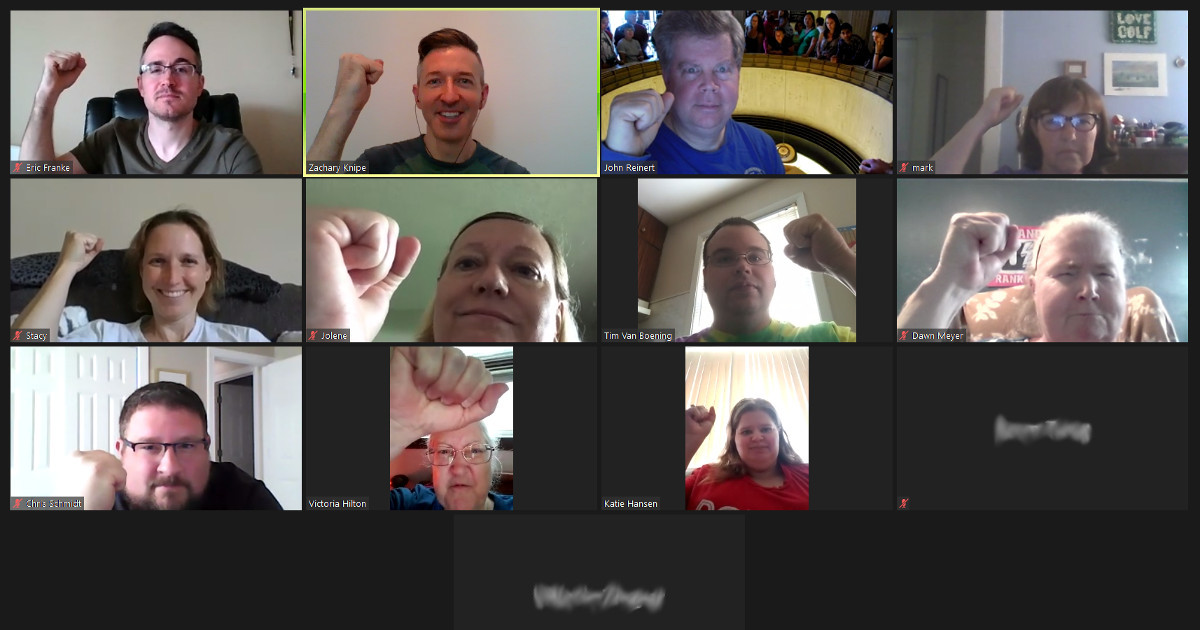 A Local 808 contract support meeting during the pandemic.

In early May, the company informed the Union that they were making big changes to the benefits package, including new insurance plans. The Union analyzed the plans and determined that they would result in substantially increased costs for members due to sharp increases in out-of-pocket maximums. That same week, the Union filed a grievance relating to unauthorized deductions the company was taking from workers’ paychecks to pay for the current benefits when people return from COVID-19 related leave, in violation of a previous agreement that the Union believed still applied. All of this while suffering a wage freeze. UE 808 had had enough and demanded bargaining over all the changes. The discontent on the floor and the liability on the company led to them proposing negotiations over video conference, bundling in finishing contract negotiations at the same time. This would become one of the first labor contracts to be negotiated over video conference. The Union also shifted to holding its contract update meetings over Zoom. After more than a half-dozen negotiating sessions through the month of June 2020, an agreement was finally reached.

The new three-year agreement provides wage increases of 10-20 percent for the six job classifications within the first year, and 3-4 percent per year for the remaining two years. It adds new protections against discrimination, modifies the language of the agreement to be gender neutral, provides improvements to bereavement and sick leave, and increases to vacation accrual based on years of service. The deal also ends mandatory extra hours during holiday weeks, a high priority for the membership who always felt like the company was taking away their holidays and taking advantage of labor rules to avoid paying overtime. In addition, the agreement also provides more union leave, which will allow the union to operate like a union and will hopefully relieve the officers of having to spend their free time and weekends doing union work. The contract also resolved the grievance regarding benefit payments, resulting in the company working out payment arrangements with workers rather than automatically taking the money, and extra Health & Welfare (H&W) dollars going forward.

Then there are seemingly smaller yet important quality of life issues, like the cell phone use policy. Over the last couple of years, management has spent a lot of effort policing the floor and looking for ways to catch people merely looking at a cell phone, putting the burden on the workers to prove that it was only music use, which is an allowable act. Much time was wasted in disciplinary and grievance meetings as a result of discipline that should have never occurred. The new policy makes progress toward workers being treated like adults, and acknowledges the reality that mobile devices have become an important part of people’s lives, keeping us connected with family, doctors, schools, childcare providers, and more. Texting is still not allowed without first stepping away to a hall or break room, but at least workers and management can stop wasting time on unnecessary discipline due to checking for important missed calls or messages.

The Union went in with a laundry list of items that the membership wanted to see improvements on, but naturally had to acknowledge the reality of the negotiating process. We knew we wouldn’t get everything we wanted, but the goal was to get the company to give up more than they had planned to. Our first contract was a solid improvement for our workers but was compromised by the very tight deadlines we were forced to work within back in October 2015. Over the last few years we’ve lost ground to inflation and skyrocketing medical insurance costs, and the price of labor in the area had gone up but our wages had only increased a small amount. People were working multiple jobs just to keep up. We are so much more than a source of cheap labor for these contractors – we needed big gains just to get back on track to where we deserve to be. I’m proud to say that we achieved that.

The contract runs through July 2023, when the current company’s task order contract with USCIS expires.