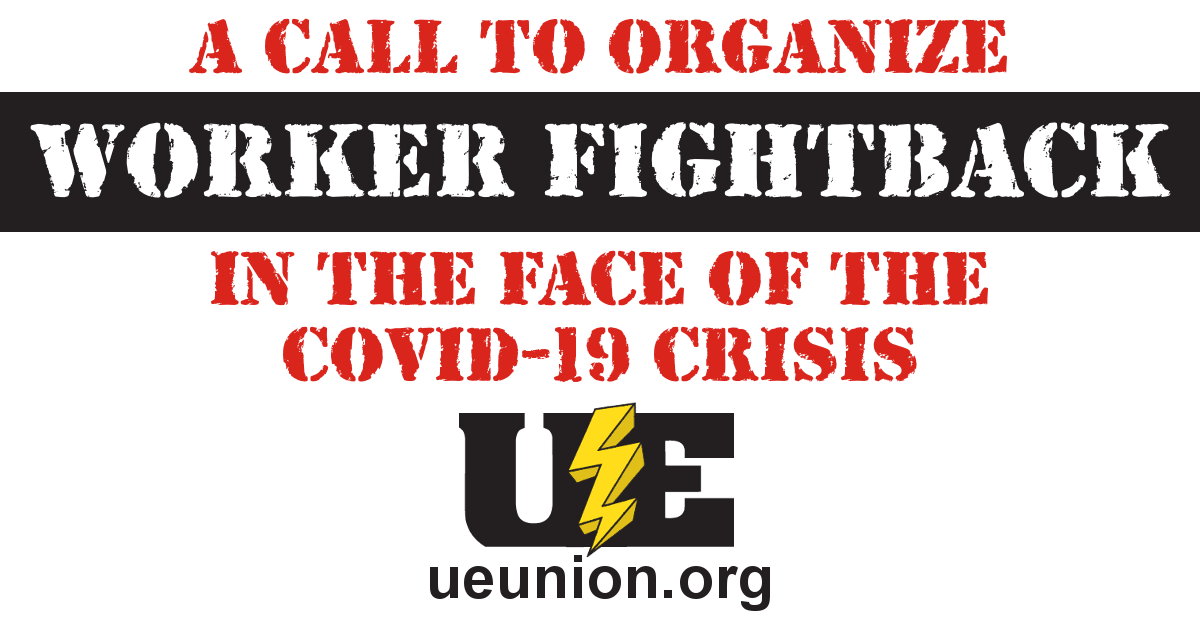 UE’s three national officers published this open letter in In These Times, encouraging the rest of the labor movement to join UE in organizing worker fightback in the face of the COVID-19 crisis.

Life-and-death circumstances are being imposed on U.S. workplaces and workers are increasingly responding by standing up, fighting back and walking out, but frequently without the support of organized labor. Unions have a choice right now: Hunker down and try to ride out the COVID-19 storm or put our shoulders to the task of assisting workers in their fight to either improve conditions on the job or shut their workplaces down. If unions seize the moment, we can not only improve the immediate situation for millions of workers but also create a wave that changes our society greatly for the better, organizes many new workers into unions and forges a generation of workplace leaders who will be able to build fighting organizations for years to come.

With the enhanced unemployment benefits currently in place and with real fears surrounding just showing up for work every day, workers have the upper hand. Employers need them much more than the other way around. Workers who learn how to use collective action to shut a workplace down or to force management to yield to their safety and compensation demands will not soon forget those lessons.

The immediate need of workers at this moment is not a comprehensive list of demands but rather three basic principles that speak to their survival needs.

Likewise, rather than an attempt to plan a national coordinated set of actions that would likely be joined by only a smattering of already-committed activists, what is needed instead is to help large numbers of workers gain the tools they need to lead fights at their workplaces.

Out of these fights the workers will develop the demands they need to protect themselves. And each of these fights, if given the proper direction and support, can inspire solidarity throughout the country and move many other workers into action, creating the conditions not only for more workplace victories but also to produce political pressures that force the federal government to address the needs of working people.

While the relief packages passed by Congress so far provide some economic support to laid-off workers, much more is needed, including to address all those left out, not least the undocumented. Congress must also act to provide health care to all given that millions more will now be without insurance due to the loss of their jobs. Already, a number of excellent proposals address these issues. Getting workers into motion is going to be the way to win them, just as widespread worker unrest in the 1930s won the relief programs and labor rights that workers needed then.

To organize the worker fightback needed right now, unions should:

Our union, the United Electrical, Radio and Machine Workers of America (UE), has called on all workers, both our members and nonunion workers, to stand up and fight. We have created online resources to help nonunion workers take action to win safe workplaces. We have published a special issue of UE Steward on how to organize members around COVID-19 issues in the workplace. Alongside the Democratic Socialists of America we are launching a joint effort called the Emergency Workplace Organizing Committee, which will provide organizing and logistical support to workers who are ready to take on their boss. Our members, both in organized shops and in workplaces where we have organizing campaigns, are winning concessions from their employers through militant and creative tactics.

Now is the time for all labor organizations committed to forging a better society for working people to step up and help launch workers into the kinds of fights needed to win that future. UE is committed to doing just that, and to work with and support all others who do so. We see some others in the labor movement doing likewise, but not nearly enough. We call on all labor unions to join us in this fight.