University of Iowa Graduate Workers in the Fight of Their Lives 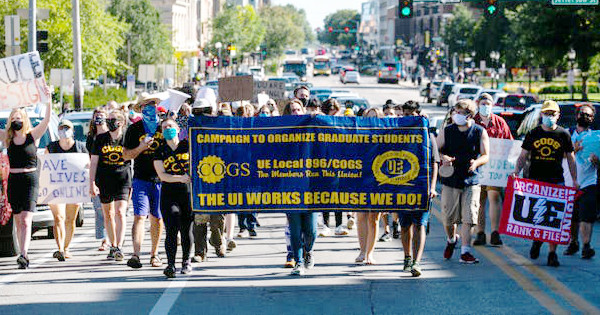 The week before classes started at the University of Iowa, UE Local 896-COGS presented a list of demands to UI President Bruce Harreld, to provide a safe working environment for the 2,000 graduate teaching and research assistants represented by the local. At the top of the list was a demand for all classes to be taught online — a demand also being made by the student government and a variety of student groups.

The university administration ignored the demands of both graduate workers and students and went ahead with a mixture of online and in-person classes, and by the end of August the New York Times was reporting that Iowa City had the second highest per-capita rate of COVID-19 cases in the entire country.

“The situation is bad,” Local 896 Press and Publicity Chair Elizabeth Handschy told the UE NEWS, shortly after classes began. “As of the first or second day of classes, there were 107 self-reported student positive tests.” The following week, the university reported 500 additional cases.

Handschy also noted that the administration’s decision to prioritize in-person teaching for first-year students, guaranteeing them each at least one in-person class, puts the burden of in-person teaching disproportionately on graduate workers and low-paid adjunct faculty.

“Join the union that fights” 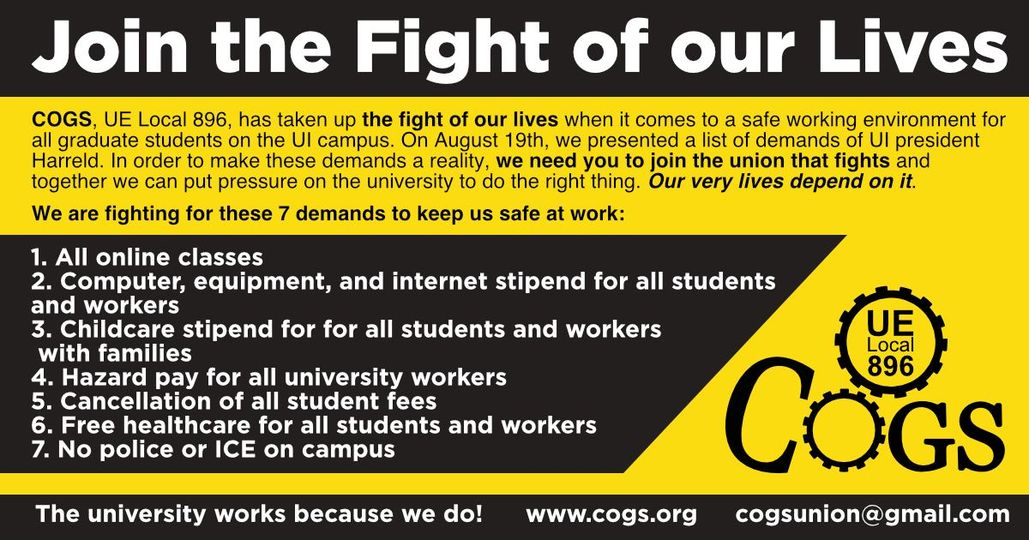 An anti-union law passed by the Republican state legislature in 2017 severely restricts the right of public-sector unions to bargain over anything other than wages — and the administration has been taking full advantage of the law, refusing to even respond to the union’s demands. Nonetheless, Local 896 has been waging an aggressive struggle, bringing attention to the administration’s reckless disregard for worker and student safety in the press and through email campaigns and socially-distanced rallies. 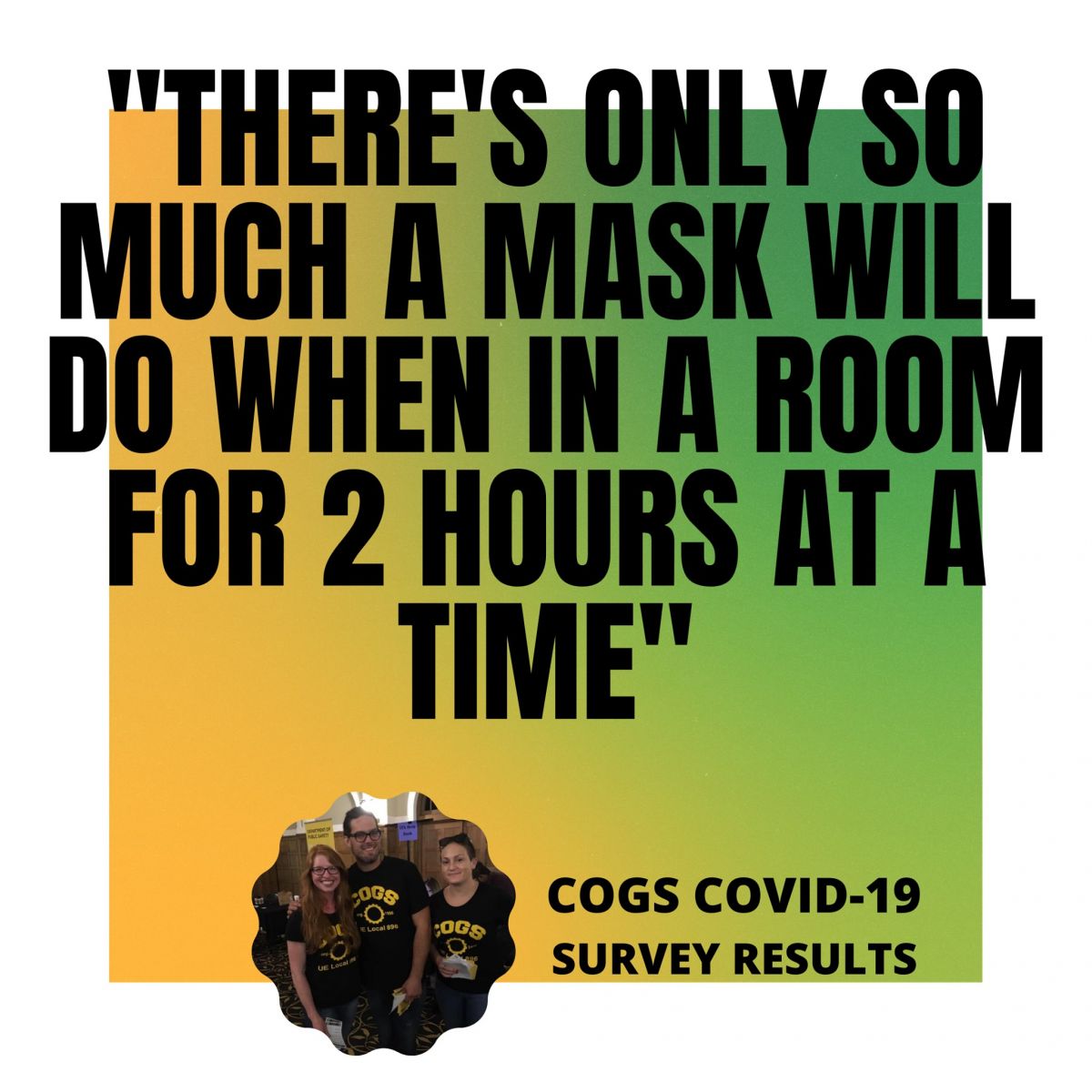 In July, the union surveyed graduate workers and found that they “do not want to come back to campus and think that the university is prioritizing tuition money over their health and safety. 84% of all respondents said that they are concerned about the fall semester.” A teaching assistant in the physics and astronomy department explained that “Having to teach multiple labs each week greatly, greatly increases my risk of infections and me spreading it to those students. There's only so much a mask will do when in a room for 2 hours at a time.”

Following the survey, union members approved a list of seven demands. In addition to moving all classes online, the demands included stipends for computers, equipment, and internet access, a childcare stipend for students and workers with families, hazard pay for all university workers, and cancellation of all student fees. They also demanded that the administration provide free health care for all students and workers and remove police and ICE from campus.

Although the local no longer has the legal right to compel the administration to bargain over these issues (in fact, the 2017 anti-union law specifically prohibits bargaining over health care), making broad demands on behalf of the whole university community “has raised the profile of the union in the community in a different way,” said Handschy. “People are seeing the kinds of work that COGS engages in, that this is really an organization that negotiates a contract but also does all of this other work.” She also said that the union is highlighting the program they are fighting for as they prepare for the re-certification election required by the anti-union law this fall.

On top of the pandemic, an additional threat loomed over hundreds of graduate workers in early July — the threat of deportation. A third of the Local 896-COGS bargaining unit are international students on F-1 visas, and on July 6 the Trump administration announced a directive revoking those visas for students who were only enrolled in online classes.

As the local’s Grievance and Bargaining At Large Officer Inga Popovaite wrote in an op-ed in the local paper, “Taking an in-person class forces international students to make an impossible choice between their health and deportation.”

The local sent an email to the entire bargaining unit making it clear that the union would fight for the rights of international graduate workers and asking all graduate workers to take action by contacting both their departments and their federal representatives. After a group of other universities initiated a lawsuit against the directive, the union organized members and allies to send emails to President Harreld, demanding that Iowa also take legal action.

Although the UI administration never joined the union in standing up for the rights of international graduate workers, the pressure from universities and students around the country forced the Trump administration to rescind the directive eight days later.

“If we had done something about this in March”

Handschy pointed out that, had the country as a whole had a more effective response to the COVID-19 pandemic, university workers would not be having to demand online classes in order to protect their own lives. “It’s unfortunate that the state and the whole country didn’t do enough before, because there are some academic programs that really suffer [from online learning] — performing arts, fine arts, classes with labs,” she said. “If we had all as a nation collectively done something about this in March, all of these people who are putting research on hold wouldn’t have to be making sacrifices.”