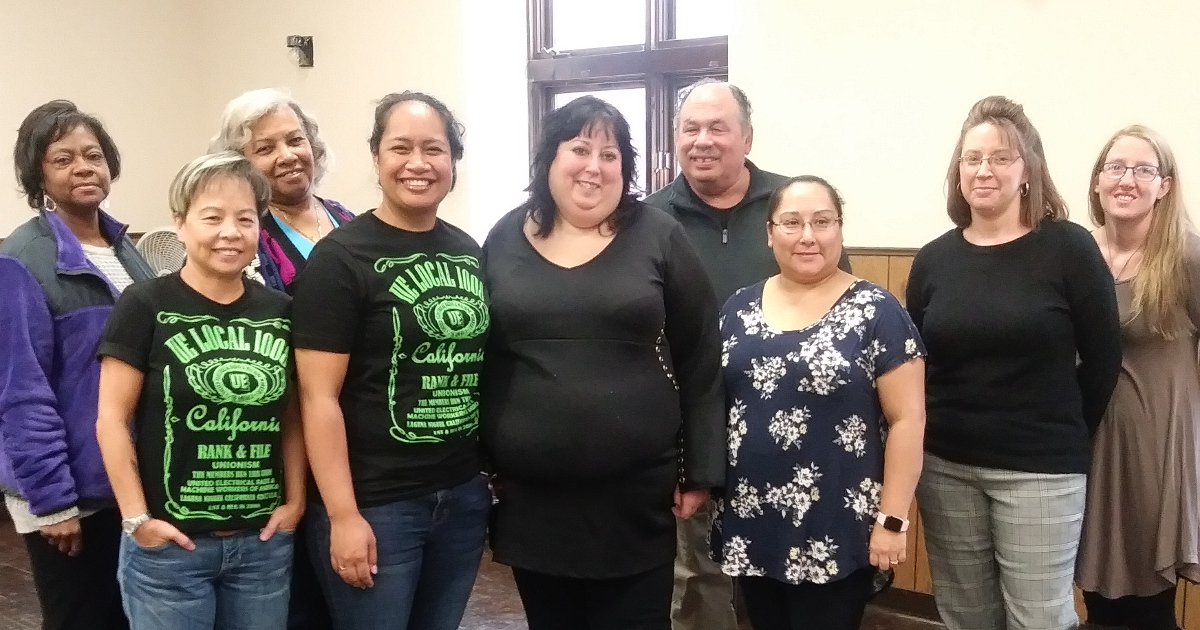 In November and December, Locals 208, 1008, and 1118 successfully negotiated new contracts covering federal contract workers in St. Albans, VT, Laguna Niguel, CA, and Chicago respectively. The locals bargained together with new contractors Sciolex and FSA Federal, which took over the contracts at the three locations on December 1. By bargaining together, the UE locals were able to put the best pieces of each contract on the table and leverage upwards, resulting in significant wage increases and improvements in benefits and language. Bargaining took place in both Chicago and Tampa, Florida.

Historically, new contractors have been unwilling to bargain with the union prior to taking over the federal contracts, but in this case UE was able to persuade Sciolex to agree to a “bridge” contract in November which continued the union contract’s terms and conditions while the locals negotiated new full contracts, eliminating uncertainty for the locals and members.

All three contracts provide for hefty wage increases in the first year. Local 208 won a $0.52 flat increase and three percent on top of that, resulting in a year-one wage increase of between 5.5 and 6 percent. Local 1118 won a five-percent wage increase in the first year, and on top of that $1.54 was moved from the health and welfare benefit to wages, increasing their base rate by over 12 percent (general clerks who had been making $15.34 are now at $17.23). Local 1008 bargained wage increased ranging from 9 to 20 percent in the first year of the contract. This was done to move their wage rates closer to parity with Local 208’s wages, something which wouldn't have happened but for coordinated bargaining.

Wages will increase 2.5 percent in each remaining year of the contracts (Local 208 and 1118 have four-year contracts; Local 1008’s contract is for three years), and the shift differential willl go up to 90 cents.

Vacation schedules were improved, with the cap increased to five weeks and the rate at which vacation is earned bumped up so that workers now earn five weeks of vacation at 15 years. The 401(k) match will rise from four to five percent. Local 208 President Kelly Robtoy noted that “The bargaining committee did their research and when the company tried to low-ball 401(k) and vacation we countered and would not accept anything lower than what is listed on their website.”

Personal days will increase from one to three per year, and members of all three locals will now get 56 hours of paid sick leave. Locals 1008 and 1118 increased their bereavement leave to five days while Local 208 expanded the options for taking bereavement leave.

The locals also won a variety of improvements on discipline. New contract language prevents the “stacking” of progressive discipline (i.e., giving a written warning for an issue unrelated to a previous verbal warning). Timelines were added to the discipline article so that discipline will be expunged from an employee’s record after one year and that cyclical behavior cannot be used to discipline employees. A “no-fault” attendance policy which had generated hundreds of grievances per year was also removed.

Correction: An earlier version of this article incorrectly stated that Local 208 increased their bereavement leave to five days.