What Does “Defund the Police” Mean? 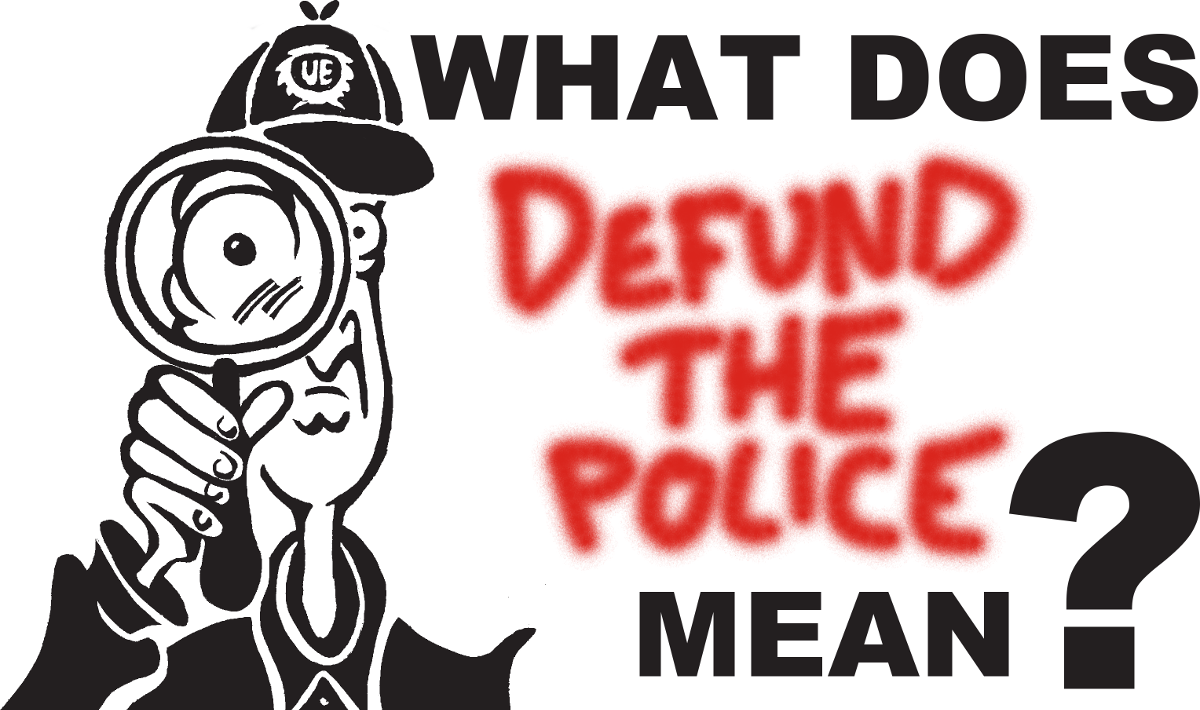 As racial-justice protests swept our country in response to the murder of George Floyd, many of the protesters began calling for governments at various level to “defund the police” — a phrase that few in the U.S. were familiar with.

While the word “defunding” can imply “eliminating,” most calls to defund the police, including the one in the UE General Executive Board’s June 23 statement, are instead a call to reduce police spending in order to rebalance budget priorities. They are born not only out of shock and horror at the repeated killings of Black people by police officers, but out of frustration that police budgets continue to grow while many other services necessary for a safe society are chronically underfunded.

Police budgets account for an average of 7.8 percent of municipal spending across the 150 large cities surveyed by the Lincoln Institute of Land Policy’s Fiscally Standardized Cities project. By contrast, spending on housing stands at 4 percent, health (including mental health services) at 2.9 percent, and public welfare at barely over 2 percent.

That 7.8 percent of municipal funds spent on police represents an 18 percent increase in the share of the budget over the past 40 years (it stood at approximately 6.6 percent in 1977). Meanwhile, the share of spending on public welfare has declined from about 4 percent to 2.2 per cent — a 45 percent decline.

The increase in federal spending on police has been even more dramatic: Since 1962, as a portion of the federal budget it has grown by more than 3½ times. In 2019, the federal government spent $4.6 billion on law enforcement, a figure the White House estimates will grow to $8.7 billion in 2020.

The increase in spending on police has not resulted in more police officers on the street per capita, however. Most of the increased spending has gone to purchasing increasingly militarized equipment, boosting the profits of military contractors.

“Take away some of that responsibility from the police”

One of the effects of police budgets rising while those of other essential public services are starved is that police officers are increasingly called upon to deal with situations that would be better handled by other professionals. As the GEB statement points out, “We need more social workers, mental health professionals, child advocates, sexual assault specialists, and other workers who are actually trained to respond to the types of crises that all too frequently fall to police.”

Charles H. Ramsey, who has served as police chief of both Philadelphia and Washington DC, told the New York Times in June that “The police have been used to fill the gaps where city services are not adequate.”

“I don’t even have a problem ... if they re-allocate to give more to substance abuse counselors and mental health professionals,” he said, “but then take away some of that responsibility from the police. Don’t just take away money; take away responsibility as well.”

Police Budgets Have Risen Even While Crime Decreases

Police budgets have continued to rise even as American cities have become safer. While some attribute the decrease in crime to the increase in policing, the evidence indicates that aggressive policing leads to an increase rather than a decrease in crime.

In 2013, federal district court judge Shira Scheindlin found that New York City’s “stop-and-frisk” policy had become a “policy of indirect racial profiling,” and in 2014 new mayor Bill de Blasio ended the policy. Despite previous mayor Michael Bloomberg’s insistence that this would lead to “a lot of people dying,” crime in fact continued to drop.

Later in 2014, the city’s police officers engaged in a work slowdown in an attempt to demonstrate that the city’s safety depended on their aggressive policing — but when they worked less, crime actually dropped.

Criminologists Christopher M. Sullivan and Zachary P. O’Keeffe studied the data from this period and concluded that “The results imply that aggressively enforcing minor legal statutes incites more severe criminal acts.” Aggressive policing, they said, “disrupts communal life, which can drain social control of group-level violence.” In other words, when policing makes it difficult for communities to practice social solidarity and look out for each other, some individuals are more likely to turn to crime.

Since the late 90s, police departments around the country have also been given over $7 billion worth of military weaponry such as grenade launchers and armored vehicles by the Department of Defense’s “1033” program. It’s not hard to see how providing police departments with military-grade weaponry encourages police to solve problems with violence.

Many police budgets are further supplemented by private “police foundations” which raise money from corporations. Since the money is privately raised, it is not subject to democratic oversight from city governments, and such funding has frequently been used to purchase controversial surveillance software. Furthermore, as research analysts Gin Armstrong and Derek Seidman point out in a recent report for the Public Accountability Initiative, “foundations provide a key space where the relationship between the corporate elite and police forces are solidified.”

In June, the city of Durham, NC voted to increase the police budget by five percent, after eliminating scheduled wage increases for essential city workers, who had been working for over two months risking their lives amid the COVID-19 pandemic. UE members who work for the city joined others in protesting this decision at Durham Police headquarters on Juneteenth (June 19th).

“The police have always gotten what they needed, but every time this city has come up on a shortfall, we have to suffer,” said Donald Quick, an operator in the city’s Public Works Department and Financial Secretary of the Durham, NC City Workers Union chapter of UE150. “And I’m tired of street maintenance and other departments having to suffer at the hands of police. It’s not right. We are the ones that have to clean this city up when a disaster comes. You don’t see the police. We make it safe.”