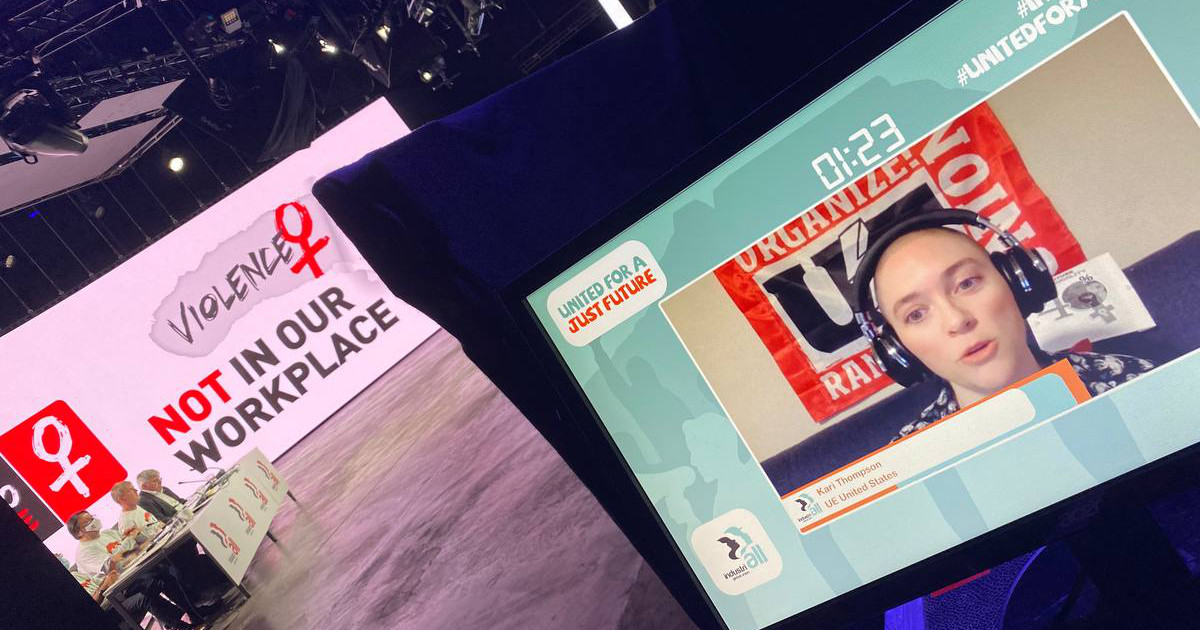 The Congress had originally been scheduled to be held in Cape Town, South Africa. In homage to this host country, IndustriALL put together a video on the militant history of South African labor struggles. The video included powerful examples of workers rejecting racism and sexism to build unity to overthrow the apartheid regime.

Congress delegates passed an ambitious Action Plan, which calls for organizing the unorganized, particularly to challenge multinational corporations; opposing the continued growth of precarious employment in all its forms; fighting for universal public services and public investments in a sustainable future; and defending and advancing gender equality in the world of work and in our societies.

The Congress passed an additional resolution on the need to address sexism and misogyny within the union movement itself. UE Director of International Strategies Kari Thompson represented UE at the Congress and spoke in favor of this resolution. She noted, “If we are to have the solidarity we need to confront multinationals, we must eradicate biased language and assumptions from our internal discourse. Patriarchy and sexism are tools the boss uses to consolidate their own power and to divide us. Do not let them succeed.”

The Congress also elected new leadership. Atle Høie, of the Norwegian United Federation of Trade Unions, was elected General Secretary. Christine Olivier of the National Union of Metalworkers of South Africa was elected one of the Assistant General Secretaries (AGS), along with returning AGS Kan Matsusaki (Japan) and Kemal Ozkan (Turkey).

Due to the online nature of the event, most of the UE delegation participated as observers. These included the three UE national officers, Local 506 President Scott Slawson, and International Rep. Tara McCauley.