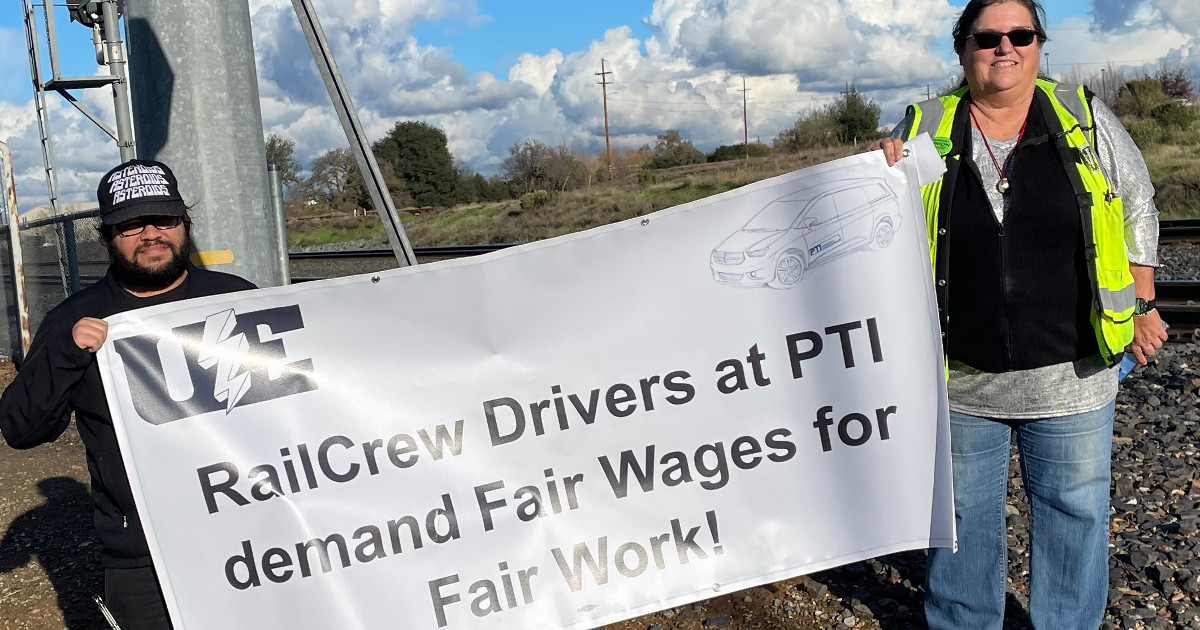 On January 20, members of UE Local 1077 who work for rail contractor PTI ratified a first contract, bringing a conclusion to a nearly two-year fight to maintain UE protections in the rail crew industry in central and northern California and Nevada.

In January of 2020, leaders in UE Local 1077 were notified that Hallcon had lost its contract to provide rail crew services to the Union Pacific Railroad to a new company, PTI. PTI took over in March of 2020 and while UE prevailed in an NLRB election in June 2020, PTI fought for almost a year and a half to keep UE out.

The company took advantage of weak U.S. labor laws, filing appeal after appeal and delaying certification for months. The employer tried to use the Trump labor board to not only overturn the 1077 election, but to make all elections harder for unions during the pandemic. Fortunately, UE prevailed on the legal front.

But UE members fought back as well, using the tactic of “bannering” at area rail yards to pressure the company to settle.

The first UE contract at PTI “bridges” seniority for rail-crew service by allowing drivers to retain the vacation accrual rates offered by the company when they took over — which the company later tried to replace with a stingier vacation package, claiming that it was too generous due to a bookkeeping error. The three-year agreement provides for wage increases of two, three and three percent, with former Hallcon employees getting a 20 cent wage increase upon ratification. It also includes a grievance and arbitration procedure as well as solid protections for discipline and discharge.

“It was a very tough negotiation since this employer was not cooperating with us,” said Ed Stephenson, a driver from Sparks, NV who served on the negotiating committee, “but we managed to bring our members together, push hard and win a good contract that I know our members will support. Our next fight is to enforce our contract and build our union to be stronger in the next contract fight.”

The negotiating committee consisted of Stephenson and Lela Jankowski, a driver from Dunsmuir, CA. They were assisted by International Representative J Burger and Field Organizer Fernando Ramirez.