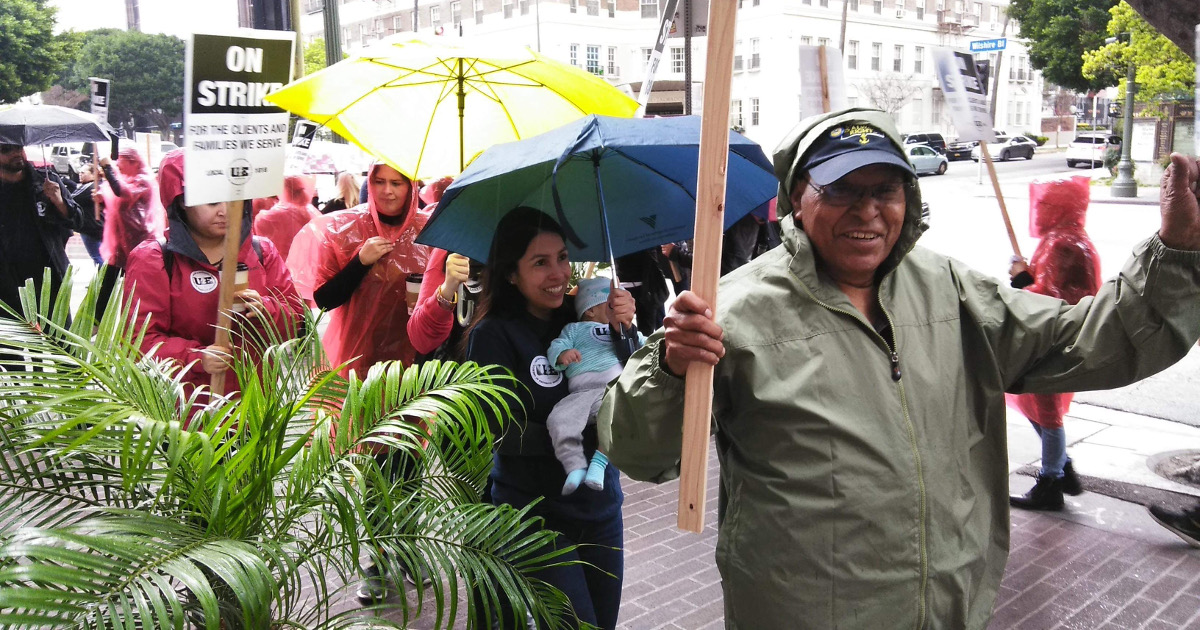 Camacho, as he was known to many, was born in Torreón, Mexico. Camacho immigrated legally to the U.S. with the assistance of his family in 1956. He got a job at Topps Records in Los Angeles, manufacturing vinyl phonograph records. After a frustrating experience with another union, Camacho learned about UE. UE organized workers in the record industry starting in the 1940s, and by the 1960s UE Local 1421 represented nearly all workers in the record manufacturing industry in Los Angeles, including Columbia, Decca, Monarch and dozens of smaller companies.

Camacho helped bring UE into his shop, and became a leader in both his shop and in Local 1421, which was then a large amalgamated local in Greater Los Angeles. The local hired him as a staff organizer in late 1962. Later the local officers convinced UE General Secretary-Treasurer James Matles to put Camacho on the national union staff. Camacho worked as an organizer for UE for 35 years, successfully organizing many shops and coordinating solidarity work with community organizations and unions in other countries. He became a UE international representative, and for several years in the late 1980s he served as the elected president of UE District 10 and a member of UE’s General Executive Board.

In 1979, Camacho took on his biggest struggle: organizing workers at Kraco in Compton, CA, a shop that manufactured car radios and other components for cars. They wanted a union because they faced a great deal of unfair treatment by their boss, but previous organizing attempts failed, in part because most other unions were skeptical about organizing the large number of undocumented workers there.

Together with a rank-and-file organizing committee, Camacho and then-UE Field Organizer Jacobo Rodriquez developed a plan that would allow their organizing efforts to flourish through contacts in the communities near the plant and where the workers lived. Rather than passing literature through the plant that looked like union organizing and would tip off the boss, they passed and mailed out a piece called “Know Your Rights”, in English and Spanish, that appeared to be from a community organization, rather than the union. Before the company caught on, UE had most of the workers organized and ready for an election, which the union won by a three to one margin.

Kraco refused to recognize UE as the union, despite the overwhelming election win, so UE members went on strike.

Members at the plant feared that the company would call immigration in order to end the strike, so they made a plan to enforce their rights as working people, regardless of their citizenship. In a 2014 interview about his work, Camacho recalled that he came up with a plan for ID cards for all the workers. It had the UE logo on it, “with a picture of the person, and on the back the Fifth Amendment in English and Spanish. [The Fifth Amendment to the U.S. Constitution includes the right to legal due process.] It said, ‘My name is so-and-so, I live at this address. Call my attorney.’ And we made it in green plastic… You don’t have to worry: you have a green card now!” he told the workers.

The prolonged strike led the union to reach back into its base of community support, calling on neighbors around the plant to help out by emphasizing UE’s commitment to equality of all workers. In that 2014 interview, Camacho said, “We were demanding equal opportunities for the community. Black people weren’t allowed to work at Kraco, and we wanted Kraco to hire black people.” Compton is a predominantly African American city adjacent to Los Angeles. To curry favor with the Compton police department, Kraco gave them a helicopter. But UE members marched on Compton City Hall, demanding that the police stop attacking the pickets, and that Kraco hire black workers from Compton. This solidified community support for the strike.

Violence at the picket line and resulting bad publicity helped force Kraco to the bargaining table, where they settled the strike with a first contract that brought significant pay increases to the workers. What became Local 1021 had a strong history of winning good contracts for members until the plant closed in 2018.

Camacho’s work extended to California’s Central Valley, where he worked with then UE Field Organizer John Hovis (who was later UE’s director of organization, and general president from 1987 to 2011). Hovis remembered fondly, “He came up through the ranks out of the shop. He had organized his shop in the record industry and then came to work for the union, just like I did. We learned from each other. He was a real good teacher if you wanted to listen, but had no patience for you if you didn’t.”

“When I first started with UE, and I would tell people that out here in LA, everyone would ask me, ‘Do you know Camacho?’ because he was such a legend,” said UE Field Organizer Fernando Ramirez. Camacho became a mentor for Ramirez. “I learned a lot from him about how when you have a big struggle, how to incorporate the community.” Ramirez put those lessons into action when he helped organize the 2019 strike for a first contract at the Lanterman Regional Center in Los Angeles, now UE Local 1018. “When I was helping them organize their strike, I was trying to remember everything Humberto told me about how to incorporate it here. And it worked!” What made the picket there even more memorable is that Camacho joined in, pictured here.

Camacho was well known in LA not just for his labor organizing work, but also his dedication to other community fights, like getting bilingual education in public schools and the right of immigrant workers to have drivers’ licenses. He was one of the founders of Centro de Acción Social Autónomo (Center for Autonomous Social Action, CASA), an organization which started in Los Angeles, but grew to have chapters around the country fighting for immigrant rights.

“Humberto Camacho was somewhat of a legend because of his work with immigrant workers in California and his early cross-border relationship with a militant and progressive Mexican union, SUTIN,” remembered Robin Alexander, retired UE Director of International Affairs. “I vividly remember his warm smile and wonderful stories. When the Immigration Reform and Control Act was signed by Ronald Reagan in 1986, I had the privilege of working with him directly on a pamphlet which, if I remember correctly, we called ‘Organizing and Defending Undocumented Workers.’ It included many of his experiences in California organizing UE shops that included both documented and undocumented immigrants, information about the new law, examples of contract language (primarily from UE shops in California). It is worth remembering that at that time there were very few unions that actively welcomed and organized undocumented workers and that UE, with leadership from Camacho, took the position that undocumented workers should be organized, not deported.”

Even after he retired he kept busy with immigration work, assisting the undocumented with their paperwork. He was president of the Pico Union Neighborhood Council, which worked to improve the lives of people in the area.

Camacho is survived by his wife, Marjorie Camacho, who was an organizer and activist among workers and in the Japanese American community; his children Linda, Norma, Humbert, and Monica; eight grandchildren and three great-grandchildren.

“We were among some of the last generation who really worked for some of the old officers in the union,” Hovis reflected. “​​He believed that education was extremely important for the local unions, like we all did who were trained by the old timers... He was deeply dedicated to the union.”

A memorial service is being planned for mid-to-late May.

This article has been updated to correct Brother Camacho's age.