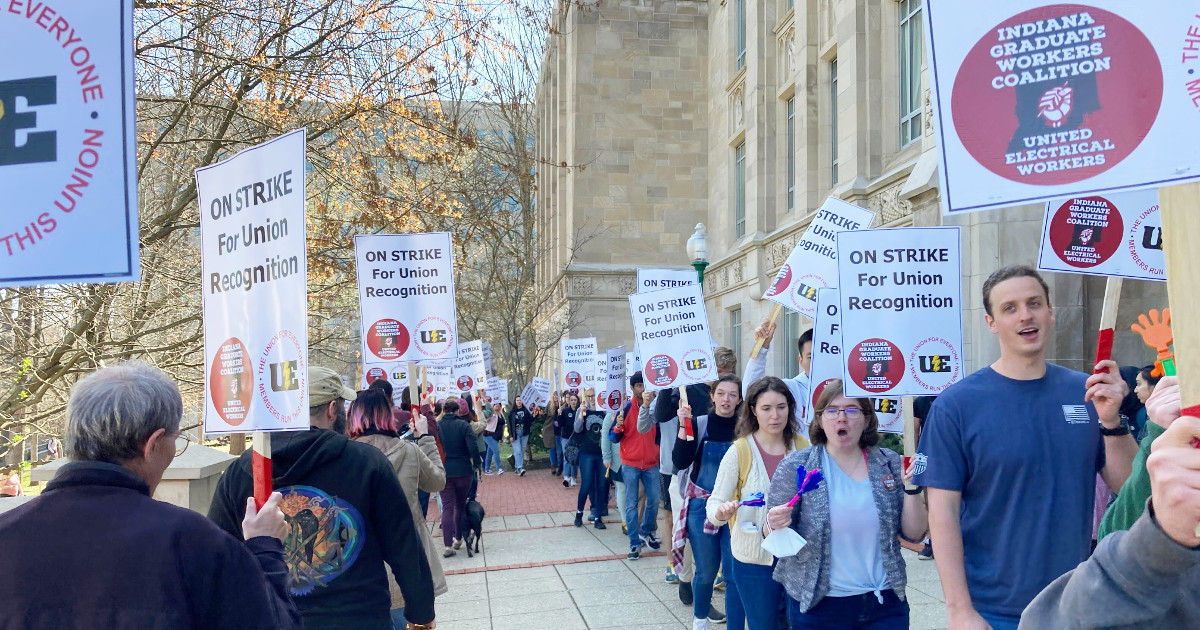 In a state that gives public-sector workers no collective bargaining rights, and facing an intransigent administration, graduate workers at Indiana University went on strike in mid-April to demand that their employer recognize their union, the Indiana Graduate Workers Coalition-UE.

Graduate workers at IU have been organizing since the fall of 2019, hoping to win a living wage, improvements to their benefits, and fairness for international students, and to end the fees that they are required to pay back to the university.

While the State of Indiana does not ban collective bargaining in the entire public sector, as North Carolina does, it provides no legal framework for workers to organize.

IU, the state’s flagship public university, has adopted its own collective bargaining policy, and in fact bargains with two unions: AFSCME represents the university’s blue-collar workers, while CWA has a contract for administrative staff. Last December, IGWC-UE presented over 1500 signed union cards, representing a supermajority of IU's approximately 2500 graduate workers, to the IU Board of Trustees and formally requested a union election.

Rather than follow their own policy, the IU administration insisted that graduate workers, whose teaching, research and administrative work are critical to the operation of the university, are not in fact “workers.” They not only refused to schedule a union election, they have consistently refused to meet with IGWC-UE.

Instead, the new provost held a series of meaningless “listening sessions” and claimed that graduate workers could raise concerns through the Graduate and Professional Student Government (GPSG). However, when the GPSG passed a resolution recommending that IU recognize the union, the administration felt free to ignore it.

After months of attempts to get the administration to talk, the union scheduled a strike vote for April 10-11. By an overwhelming margin of 1,008 to 23, IGWC-UE members voted to strike on April 13.

“We are out of options,” said IGWC-UE member Chris Agostino. “How can a major university like IU so callously reject dialogue with those who teach the courses and do the research on this campus?”

“For two years, they have ignored and disrespected us," added IGWC-UE member Anne Kavalerchik.

Although the provost sent out an email threatening strikers, graduate workers received widespread support from faculty, undergraduates and community members. Hundreds of faculty publicly pledged not to retaliate in any way against striking graduate workers, and numerous departments issued statements of support. Undergraduate students have walked out in solidarity, and both the Bloomington City Council and the Monroe County Council passed resolutions in support of the strikers.

As of this writing, the picket lines remain strong, with IGWC-UE members voting by 1102-30 to extend the strike into its fourth week — almost one hundred more YES votes than the initial strike authorization vote. Visit indianagradworkers.org for updated information, or follow IGWC-UE on Twitter at @IndianaGrads.