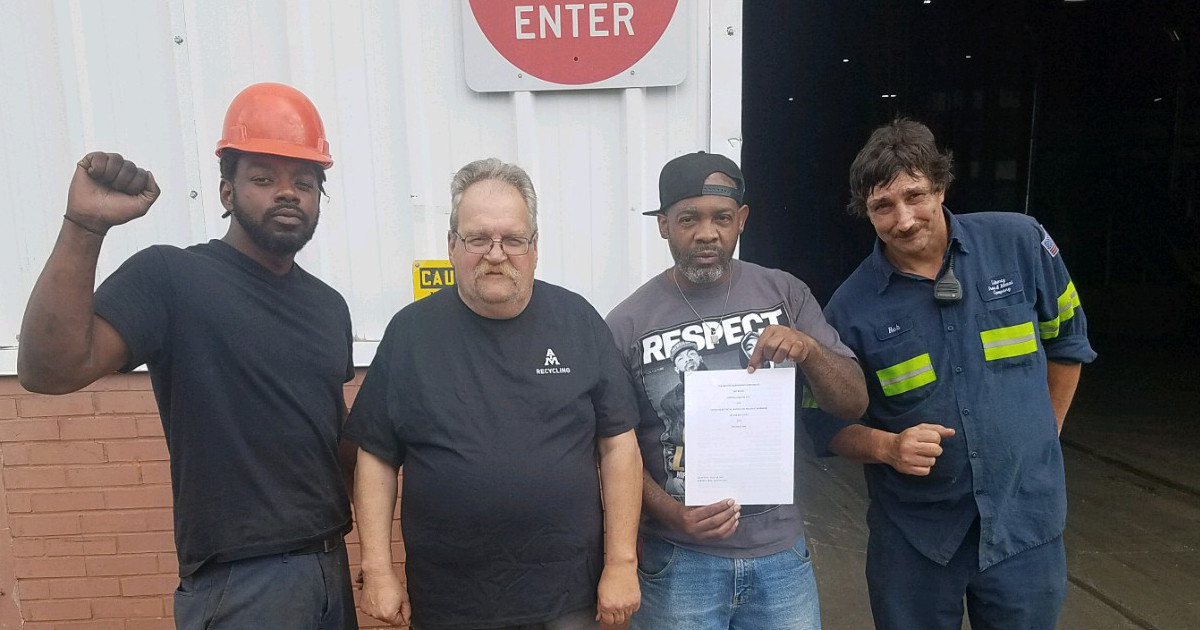 UE Local 683 members secured major improvements in their first contract with their new employer American Iron & Metal (AIM), including a $3.75 wage increase over the life of the three-year agreement. The new agreement also includes union security for the first time, among other improvements.

The wage increases include $2 in the first year (an average 11 percent increase), $1 in the second year, and $0.75 in the third year. Wages will increase on average more than 20 percent over the life of the agreement. Truck driver rates were also improved.

Late last year, AIM, which is based in Quebec, Canada, purchased the assets of Liberty Iron & Metal, including its facilities in Erie, PA, where Local 683 members work. AIM agreed to recognize the union and assume the local’s contract with Liberty.

After AIM took over the Erie facilities, it offered the local’s members improved medical benefits and a 401(k) with a better employer match for members participating in the plan. The new agreement secures these benefit improvements with contract language limiting the company’s ability to make any changes to the benefits during the life of the agreement.

During the negotiations over medical benefits, the Local 683 negotiating committee pressed the company to join them in supporting Medicare for All, pointing out that the company doesn’t have to provide medical benefits for their workers in Canada due to the Canadian single-payer healthcare system.

The company withdrew its two concessionary demands during the last day of negotiations after the negotiating committee made it clear that it had no intention of giving up holidays, vacation days, and personal days counting as time worked for overtime purposes or limiting recall rights to only one year.

“I think negotiations went really well with the new company,” said Local 683 President Ben Seidler. “We won a lot of improvements for our members. And, we finally won union security after 20 years of fighting for it.”

AIM has 3,000 workers spread across 90 different locations, mostly in Eastern Canada where it is the dominant player in the scrap industry. Within the U.S., the company also has scrap yards in Maine, Rhode Island, Ohio and Florida. The Erie location is its only unionized location in the U.S.