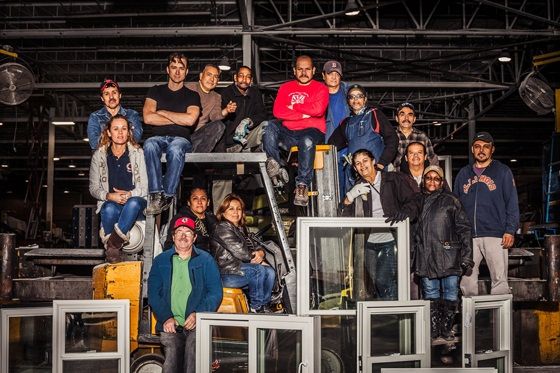 These UE Local 1110 members are the worker-owners of the New Era Windows Cooperative.
Mayo 8, 2013
Chicago

The worker-owners of New Era Windows Cooperative, who are members of UE Local 1110 and some of the former employees of Republic Windows and Doors, will hold a grand opening and press conference on Thursday, May 9. The event will take place at 3:15 at the site of the new plant, 2600 West 35th Street in Chicago.

Almost a year to the day after their window factory closed  by its last owner, Serious Energy, a group of former Republic Windows and Doors workers are launching their own window business without bosses. They successfully raised capital to buy the factory's manufacturig equipment themselves and run it democratically.

The members of Local 1110 successfully occupied the Republic plant for six days in December 2008, when the owner gave them only three days notice that the plant was about to close, and denied them earned vacation pay and other benefits. They won the money they were owned, and also won the reopening of the plant under a new owner. When the second owner announced in February 2012 that the plant would close again, workers again occupied the plant. This sit-down was resolved in 11 hours. Workers won the company's commitment to stay open another 90 days and give them the opportunity to keep the plant open. The local also negotiated a severance package for all of its members.

The new plant will manufacture high-quality, energy efficient windows at affordable prices. Find out more about it at this link.