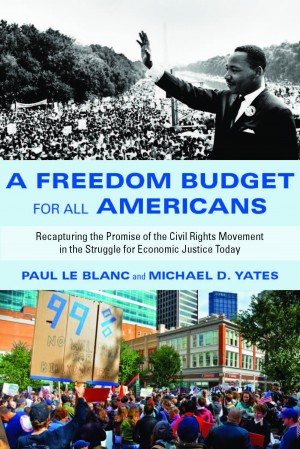 A Freedom Budget for All Americans:

In the decades since the 1968 death of Martin Luther King, and especially since the 1983 establishment of a national holiday bearing his name, his ideas and goals and those of the movement he helped lead have been sanitized to make them non-threatening to the powers that be. King’s life, work and goals, and those goals of the millions of people who struggled alongside him, have been reduced to four words from one speech: “I have a dream.” But King and other leaders and participants of the civil rights movement of the 1960s had goals that went well beyond overturning the system of Jim Crow segregation in the South and regaining voting rights and full citizenship rights for African Americans. They wanted to transform America to bring economic justice to not only black people but to all working class and poor people.

In pursuit of those broader goals, King and his allies in the civil rights movement proposed an alternative federal budget which was an economic blueprint for a more just society. In an important new book, two activist scholars uncover the largely-forgotten history of the Freedom Budget for All Americans, issued in 1966 by King, A. Philip Randolph, and Bayard Rustin and endorsed by a broad range of civil rights and progressive organizations. The Freedom Budget went much further than President Lyndon Johnson’s War on Poverty, with plans to eliminate poverty in 10 years through full employment, “decent and adequate wages to all who work”, a housing program aimed at wiping out slums, improvements in healthcare, education, transportation and environmental protection. The Freedom Budget was to be financed from “a fraction of” the growth in federal revenues, and to become self-financing because of the increased revenue that would be generated by full employment.

The authors of this book are both friends of UE and the labor movement and veterans of peace and social justice movements whose teaching and writing are focused on working class activism. Paul Le Blanc teaches history at La Roche College in Pittsburgh; Michael Yates taught economics at the University of Pittsburgh at Johnstown and is now an editor at Monthly Review magazine and editorial director of Monthly Review Press. Their goals in researching and writing this book were not merely to unearth a buried chapter of the history of the 1960s but, as their subtitle suggest, to find lessons from the Freedom Budget for people’s movements today.

The book shows that some of the most important civil rights leaders were more radical than we might know. Martin Luther King was influenced by democratic socialist ideas since his days in theology school in the late 1940s. His widow Coretta Scott King later recalled that when she first met Martin in 1952, he expressed the view that “…the basic problem in our society had to do with economic justice or… the contrast between the wealth of the haves and have-nots. Believe it or not, he spoke these words to me when I first met him. It wasn’t something he learned later and developed.”

Two other key leaders of the 1963 March on Washington for Jobs and Freedom had direct organizational links to the American socialist movement. A. Philip Randolph was a major figure in both the Civil Rights and labor movements. In the 1920s and ‘30s he organized the Brotherhood of Sleeping Car Porters, an important black union, and he was the only black leader on the executive board of the American Federation of Labor (AFL). Randolph was a member of the Socialist Party of America and a founder of the National Negro Congress. In 1941 he built a movement for a March on Washington to demand an end to discrimination in war industries and the military. The threat of this march forced President Roosevelt to sign an executive order banning race discrimination in war industries. Randolph’s efforts also led to the 1948 racial integration of the military. It was Randolph, not King, who initated the 1963 March on Washington. The chief organizer of that march was Randolph’s protégé Bayard Rustin, a pacifist and socialist who was jailed for his beliefs during World War II. Randoph backed Rustin over the objections of some other civil rights leaders who were hostile to Rustin because he was gay.

It was no accident that the 1963 march was titled the March for Jobs and Freedom. This indicates the consensus among what the authors call the “activist wing of the civil rights movement on what they refer to as “The Strategy.” This was a plan to eliminate racism in our society in all its manifestations, first by attacking its weakest link, the Jim Crow system in the South and other manifestations of blatant racial discrimination and second-class citizenship, through a mass national movement. This was to be followed by a second phase, “tackling issues of economic justice” in “an even more massive struggle” that would unite the anti-racism and labor movements around demands of jobs for all, ending poverty, and building economic democracy.  For Randolph, King and other leaders involved in “The Strategy”, the economic justice movement summed up in the Freedom Budget was not to be a “black” movement, but one that would unite working people and poor people of all races and in which labor unions would be a key component.

The book describes how the idea of the Freedom Budget was developed by several activists and thinkers in the Socialist Party who were close to Randolph and Rustin. The central figure in developing the economic specifics of the Freedom Budget was Leon Keyserling, a respected New Deal economist who had worked in the Roosevelt and Truman administrations. Rustin headed the effort to gather endorsements for the budget, and it was backed not only by the “activist” civil rights groups – SCLC, SNCC and CORE – but by the more moderate NAACP and Urban League, and by a broad range of liberal organizations and individuals. The AFL-CIO, then headed by the conservative George Meany, had failed to back the 1963 March on Washington, but did endorse the Freedom Budget. But the blessing of Meany and the AFL-CIO leadership was a paper endorsement – they made no effort to fight for the Freedom Budget.

But for the Freedom Budget to make serious headway toward enactment, it needed a truly massive popular movement fighting for it. That never happened, and the authors examine the reasons why. One flaw in the Freedom Budget was that it evaded the biggest issue facing the country in the mid- to late-1960s, the Vietnam War, and did not call for a shift from military spending to the goals of full employment and economic justice. This refusal to confront military spending is explicit in the official summary of the Freedom Budget, which says, “No skimping on national defense.” Randolph and Rustin were unwilling to break with the Johnson administration, nor with the stridently pro-war, anti-communist Meany, by opposing the war. The Johnson administration and its liberal backers in Congress showed no interest in the Freedom Budget, and by their silence on the war, the architects of the Freedom Budget isolated themselves off from the growing antiwar movement, which Le Blanc and Yates argue could have been an important base of support for the budget. The authors note that even if it was economically feasible to have both the Freedom Budget and the Vietnam War (as Randolph, Rustin, many of their Socialist Party allies believed) it was not politically feasible. As UE General President Albert Fitzgerald often said during that period, in his criticism of pro-war labor leaders and liberals, “You cannot have guns and butter.”

Of the major leaders of the Freedom Budget effort, Martin Luther King stands apart for having the courage and moral consistency to openly oppose the Vietnam War. King was also moving forward, in the final year of his life, in organizing for the economic justice phase of “The Strategy” with his plans for a Poor People’s March on Washington uniting the country’s working class and poor – black, white, Latino and Native American. The circumstances of King’s death – gunned down while organizing support for a strike by the Memphis sanitation workers – should forever remind us that “the dream” for which he fought included economic equality and justice as well as formal racial equality.

In their final chapters, Le Blanc and Yates examine economic developments since the time of the Freedom Budget, “Poverty and Its Attendant Evils Today,” and preliminary suggestions for “a new Freedom Budget.” They demonstrate how economic inequality and poverty have gotten worse since the 1970s. (Compared to 1975, far more Americans today are living in “deep poverty”, with incomes of one-half or less of the official poverty income level.) Working class incomes and security have been battered by the loss of manufacturing jobs, growing power of the financial sector, massive attacks on unions, the economic crashes of 2000 (after the dot-com bubble) and 2008 (when the housing bubble burst) and the jobless recoveries that followed. The authors have not drafted a Freedom Budget for the 21st century, but they say that one is needed, and it must arise from the movements fighting today for economic justice and equality, for which it would be a means to focus and unite their struggle and offer a coherent vision of the changes we’re fighting for. They also delineate five basic principles for such a budget as well as 12 basic objectives.

The Freedom Budget, in its promise and in its defeat, has much to teach us today.  A unifying vision and program for a better America, bringing together unions and other movements fighting for economic justice, could be a powerful tool helping to move us forward.