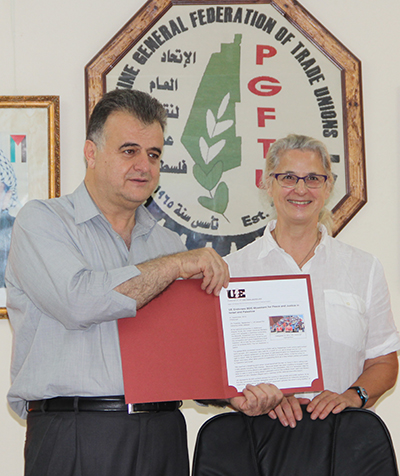 A highlight of the trip was our meeting with the top leaders of the PGFTU, where I was able to hand deliver the UE convention resolution, “Justice and Peace for the Peoples of Palestine and Israel” to General Secretary Shaher Sa'ed.  We learned how Palestinian workers who have jobs in Israel have to spend three hours each way at the border crossings even though they have work permits.  The passage is surrounded by barbed wire and cages and can include x-raying and disrobing.  They work in Israel where the only jobs for which they are hired are the lowest paid, dirtiest and riskiest. There is no "equal pay for equal work."

We traveled through the West Bank and saw the Israeli settlements, all of which are in violation of the international law. The Geneva Conventions prohibit a country that is militarily occupying foreign territory to settle its own population there, but that’s exactly what Israel has been doing since 1967, and there are now 600,000 Israeli settlers, with settlements growing larger all the time. We saw the "bypass" roads that are new and modern, but which Palestinians are forbidden to use – they are only for the use of Israel citizens.  We saw Israeli military checkpoints, some at permanent locations, and some randomly stopping cars.

We were given a tour by a former Israeli soldier who is a member of Breaking the Silence, an organization of Israeli ex-soldiers who speak out against the unjust government policies they were ordered to carry out. He told us about his orders to maintain the conflict by searching homes at 2:00 a.m., interrogating residents not suspected of any wrongdoing, and "keeping the roads sterile".  He was told by his superiors, "We want Palestinians to feel that they are being chased."  We saw the water tanks on the tops of many Palestinian houses. The reason they are there is Israel controls the water supply, and much of the time people have running water only for a few hours once every two weeks, so when they can get water they store it for the times when its shut off. For Israeli settlers, the water runs all the time.

We also visited the State of Israel itself, where we met with Aida Touma-Sliman, a member of the Knesset (Israeli parliament) and learned of the systemic discrimination against Palestinians who live in Israel and are citizens, both Muslims and Christians.  Although Arabs make up 20 percent of the Israeli population, funding for the education of each Arab child is one-third of what is spent on a Jewish student. Israel is cutting the funding for Christian schools.  A few Arab villages that Israel destroyed managed to relocate, but are under threat of destruction again.

We were reminded of the former apartheid regime in South Africa, and we were reminded of the time when European colonizers came to North America and drove out the native peoples and took over their land.  When I asked a PGFTU leader what it would be helpful for us to do when we returned to the U.S., he said, "Just tell the truth about what you saw."

The rest of the world has made many efforts to pass resolutions at the UN which address the Israeli military occupation and illegal settlements, but each time the U.S. vetoes them.  On this trip, we heard and saw the other side of the story that is never reported in the mainstream U.S. media.  I recommend that anyone who wants to understand the truth about Palestine contact the Tree of Life Educational Foundation and sign up for a tour.