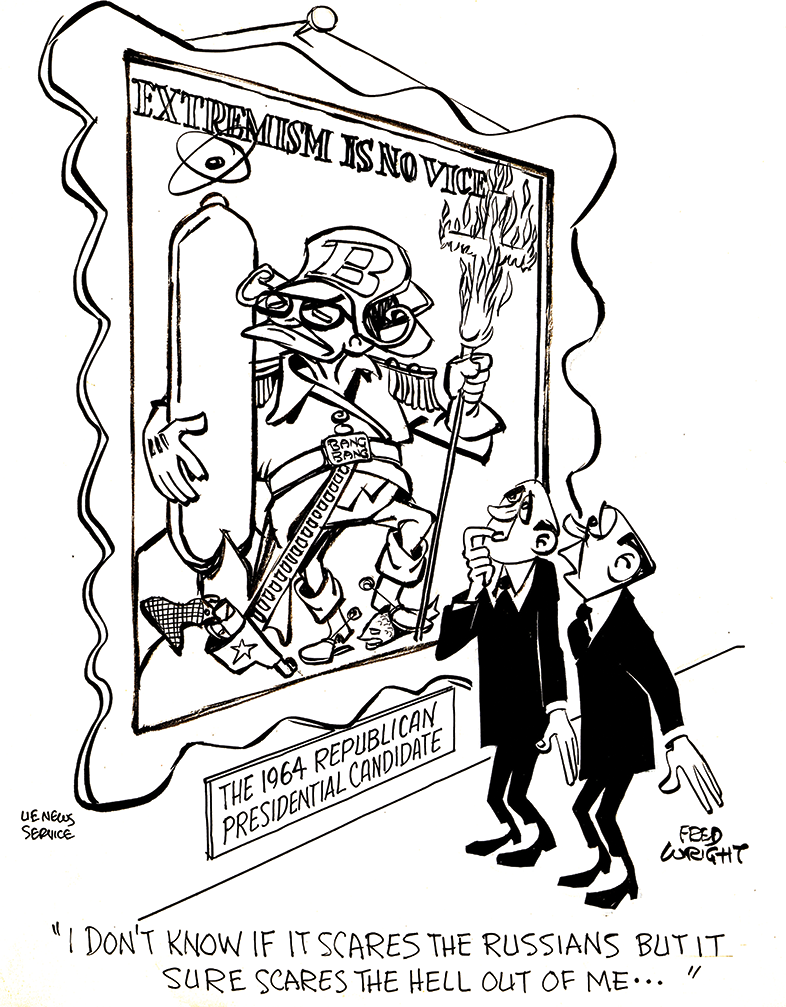 A visual warning, from UE Cartoonist Fred Wright, about the extremism of 1964 Republican nominee Barry Goldwater who had said, in his acceptance speech, “Extremism in defense of liberty is no vice.”
November 1, 2016
by Al Hart

In its 80-year history, UE has made only seven endorsements of candidates for president of the United States: Franklin D. Roosevelt twice, Lyndon B. Johnson, George McGovern, Michael Dukakis, Ralph Nader and Bernie Sanders.

Founded in 1936, UE endorsed President Roosevelt for reelection in 1940 and in 1944. Roosevelt was perhaps the most pro-labor president in history, and under his presidency we gained such landmark legislation as the Wagner Act (recognition of collective bargaining rights), the Social Security Act, and the Fair Labor Standards Act (which included overtime pay after 40 hours and setting a minimum wage.) Roosevelt’s New Deal also brought massive jobs programs rebuilding of the country’s infrastructure that helped pull us out of the Great Depression.

Toward the end of World War II, Roosevelt died in office and was succeeded by Vice President Harry Truman. Truman largely abandoned Roosevelt’s promises, and the plans of UE and other unions, to continue and expand the New Deal in a peaceful world. Instead he launched the Cold War which included repeated confrontations and an arms race with the Soviet Union, and intervention in small countries to promote U.S. corporate interests. Truman’s Cold War policies included support for Britain and France in their losing efforts to maintain their colonial empires against independence movements. He also promoted divisions in the labor movement, as some union leaders tried to prove their “patriotism” by attacking fellow unionists who were accused of being “radicals” and “reds.”

Henry Wallace, who had been FDR’s vice president from 1941 to ’45, ran against Truman in the 1948 election as the candidate of the Progressive Party. Wallace called for a return to Roosevelt’s policies and his ideas were very close to UE’s. Many in UE backed Wallace, including General President Albert Fitzgerald, who co-chaired his campaign. But because the membership was sharply divided between Wallace and Truman supporters, UE made no endorsement in the 1948 presidential election.

The leadership of the CIO (with which UE was affiliated) attacked UE because of our union’s political independence, criticism of the Cold War, and for not endorsing Truman. When the CIO refused to stop other CIO unions from raiding UE, our union left the CIO. From 1949 until well into the 1960s, UE was under fierce attack, by employers, the government, and other unions. The union was fighting for its survival, and both the Democratic and Republican parties were lined up against us. The union saw no reason to make an endorsement in 1952 or ’56. In both races the candidates were Republican Dwight Eisenhower and Democrat Adlai Stevenson, who differed little on the issues. UE also made no endorsement in 1960. John F. Kennedy had joined in the attacks on UE in the 1950s, helping a rival union defeat UE at a GE plant in Massachusetts, and Nixon was an especially vicious red-baiter, although in most respects he followed the centrist course of Eisenhower.

The 1964 election was different. Barry Goldwater wanted to roll back the New Deal, escalate the Vietnam War, and defeat the Civil Rights Movement.  He was supported by extremists from the John Birch Society, Ku Klux Klan, and Southern segregationists overall. Johnson, on the other hand, signed the Civil Rights Act and the Voting Rights Act, launched the War on Poverty, and after the election pushed for passage of Medicare and Medicaid.  Delegates to the UE 29th Convention said in a resolution, “The Goldwater candidacy represents a radical departure from the historic principles of the Republican Party and represents… (a) serious a threat to the membership of UE and the entire nation…” The convention endorsed Johnson, but also passed a resolution calling for negotiations to get the U.S. military out of Vietnam.

UE was outspoken in its opposition to the Vietnam War as it escalated through the late ‘60s. Several other major unions gradually came around to UE’s position of opposing the war, and UE helped form the coalition Labor for Peace. In 1972 endorsed George McGovern for president, who called for ending the war, and had a good record on labor issues. Other unions that opposed the war also supported McGovern, but not the AFL-CIO, which under the conservative leadership of President George Meany made no endorsement. In every other election the AFL-CIO backs the Democratic nominee without question, but in 1972 the federation was (as UE members said at the time) “neutral for Nixon.”

UE has refrained from endorsing mainstream Democrats who posed no challenge to corporate dominance. It made an exception in 1988 for Michael Dukakis who, as governor of Massachusetts, helped UE Local 277 use the threat of eminent domain to save its members’ jobs at Morse Cutting Tool in New Bedford. A politician willing to back government action against corporate property to save union jobs deserves some respect, and UE delegates had had enough after eight years of Reagan. But Dukakis ran a weak campaign and lost to the first George Bush.

Through the 1990s UE watched in dismay as Bill Clinton changed the Democratic Party, abandoning pro-worker polices to make the party more corporate-friendly. Clinton spent his first year in office pushing for NAFTA, a Republican-initiated free trade deal which George H. W. Bush could not get through Congress because of Democratic resistance. Clinton persuaded enough Democrats to vote with Republicans to get NAFTA passed (as Obama is trying to do with TPP.) In 1996 Clinton signed a Republican bill to “end welfare as we know it.” When the next recession hit in the early 2000s, the loss of the welfare safety net sank many unemployed people and families into extreme poverty. In an effort to outdo Republicans in being “tough on crime,” Clinton backed tough sentencing laws that gave the U.S. one of the highest incarceration rates in the world. In 1999 he signed a Republican bill to repeal the Glass-Steagall Act, a New Deal law that prevented commercial banks from making speculative investments. This deregulation led to the housing bubble of the 2000s and the Crash of 2008.

It was in this environment that UE joined forces with several other unions to form the Labor Party. UE, which had long called for labor to form its own political party, enthusiastically supported the Labor Party from the start. But the Labor Party was reluctant to run candidates. In 2000 longtime anti-corporate crusader Ralph Nader ran for president on the Green Party ticket. Nader aimed his fire not only at Republicans, but at the “Republican-lite” policies of Clinton and his Vice President Al Gore, who was the Democratic nominee for president. Nader spoke at UE’s 2000 National Convention, and the next day delegates voted to endorse his candidacy, for much the same reasons the union was working to build the Labor Party.

The most recent UE presidential endorsement came earlier this year. Delegates to the union’s three regional meetings in the Spring voted to endorse Bernie Sanders, a longtime friend of UE with a solid record of fighting for working people. This was the first time UE has endorsed a presidential candidate in the primary elections. As you can see in the General Executive Board’s statement posted on our website, the union is not making an endorsement for president in the Novermber election. But the GEB is urging a vote against Donald Trump.

The history of UE's approach presidential elections illustrates the union’s overall approach to politics. It’s what the union calls "rank-and-file independent political action." It's independent because UE has never offered unconditional loyalty to any political party or politician.  It’s rank-and-file action because it focuses on educating and mobilizing our members to make their voices heard, to push legislators and government officials to support policies favorable to workers. This includes rank-and-file lobbying – setting up meetings where members talk directly to elected officials about our issues, as well as petitions, rallies, demonstrations, phone and email campaigns.

UE’s commitment to independent political action is one of the things that make UE different, a difference UE members have been proud of and have fought for throughout our history.