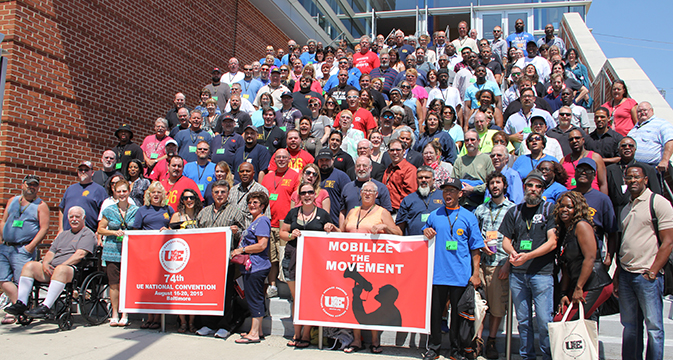 Delegates to UE's 74th National Convention in August 2015 adopted a resolution on peace and justice for the peoples of Palestine and Israel, which has been unsuccessfully attacked by an Israeli law firm.
July 22, 2016

The National Labor Relations Board (NLRB) has reaffirmed its dismissal an unfair labor practice charge brought by an Israeli law firm against a U.S. union, the United Electrical Workers, over its support of protests against Israeli policies including the union’s endorsement of the Boycott, Divestment and Sanctions movement (BDS) movement.

At its national convention in Baltimore August 16-20, 2015, the United Electrical Radio and Machine Workers of America (UE) adopted a resolution endorsing the BDS movement to pressure Israel to negotiate peace with the Palestinians and end the occupation. UE is the first national U.S. union to endorse BDS. Read the resolution here.

On October 23, the Israeli law firm Shurat Hadin filed a charge with the NLRB alleging that UE’s resolution violated the prohibition in U.S. labor law against “secondary boycotts.” The union disputed the charge, arguing that Shurat Hadin’s action was an attempt to interfere with the First Amendment rights of the union and its members to express opinions on political and international issues, and also that the Israeli firm’s allegation were factually untrue. On January 12, Region 6 of the NLRB dismissed the charge. Shurat HaDin then appealed to the Office of the General Counsel of the NLRB, and on May 26 that office denied the appeal.

UE National President Peter Knowlton says the union “welcomes the labor board’s decision” to reject, for a second time, Shurat Hadin’s charge. He said that UE in the past had “withstood attempts by the U.S. government to silence us during the McCarthy era in the 1950s,” and was “unbowed by the latest attempt of a surrogate of the Israeli government to stifle our call for justice for Palestinian and Israeli workers.” Knowlton added, “The NLRB’s decision is a victory for the growing BDS movement across the U.S., which faces increasing political attempts to silence and intimidate critics of the Israeli government.  As Americans who have a constitutional right to criticize our own government, we certainly have a right to criticize and, if we choose, boycott a foreign government that is heavily subsidized by U.S. taxpayers.”

UE General President Peter Knowlton commented: “Since the 1980s, the delegates to our national conventions have voted to support equal rights and even-handed treatment of Palestinian and Israeli people as the only path to peace. At the 2015 convention UE delegates voted to support BDS because of the atrocities committed by the Israeli government in Gaza in 2014, and the increasing discrimination and repression of Palestinian people and workers by the Israeli government and military. Our U.S. tax dollars, in excess of $3 billion a year, are funding this system of apartheid, and we must do more to change it.”

UE is very concerned about attacks on the BDS movement by U.S. politicians who advocate or have adopted resolutions, executive orders, and statutes targeting the BDS movement, said Knowlton. He pointed out that the 2016 party platforms of both the Democrats and Republicans condemn BDS. “These are unconstitutional attacks on free speech,” said the union president. “Boycotts have been an essential component of non-violent struggles for workers’ rights and other struggles for justice throughout our history. The Montgomery Bus Boycott launched the modern Civil Rights Movement. The worldwide campaign of boycott, divestment and sanctions against South Africa in the 1980s helped end the apartheid system in that country.”

“UE opposes any legislation and legislative resolutions that outlaw or condemn legitimate criticism of Israel and support for BDS, or attempt to sanction individuals, organizations, companies or governments simply because they have legitimately criticized Israel or supported BDS. We will support legal and political challenges to overturn such attacks on fundamental civil liberties.” On July 14, peace activists defeated an anti-BDS bill in the Massachusetts legislature.

UE is an independent, member-run union, with headquarters in Pittsburgh, representing 30,000 workers across the country in the private and public sectors. At its five-day convention last August member delegates acted on 37 resolutions on collective bargaining, organizing, and political issues.

Shurat Hadin is an Israeli organization that uses legal cases to harass supporters of Palestinian rights and critics of Israel, a strategy known as lawfare. Its most infamous case was a 2011 lawsuit against former President Jimmy Carter for writing a book critical of Israel, Palestine: Peace Not Apartheid. The suit against Carter failed, as did a suit aimed at censoring Al Jazeera’s reporting. Its attacks on UE began Sept. 2, 2015 when Shurat Hadin wrote a letter to the CEO of the General Electric Company, UE’s largest employer, “warning” GE to “rescind its recently concluded labor agreement” with UE because Shurat Hadin didn’t like the union’s resolution on Israel and Palestine. On July 11, 2016, Shurat HaDin sued Facebook for $1 billion, charging the social media company with insufficiently censoring Palestinians.

The global BDS movement arose from a 2005 call by Palestinian trade unions and human rights groups. UE’s resolution also calls for a cutoff of U.S. aid to Israel and for U.S. support for a peace settlement on the basis of self-determination for Palestinians and the right to return. With its resolution UE joined the South African labor union confederation COSATU, Unite the Union in Britain and many other labor unions around the world in supporting BDS as a step toward justice and peace in Palestine and Israel