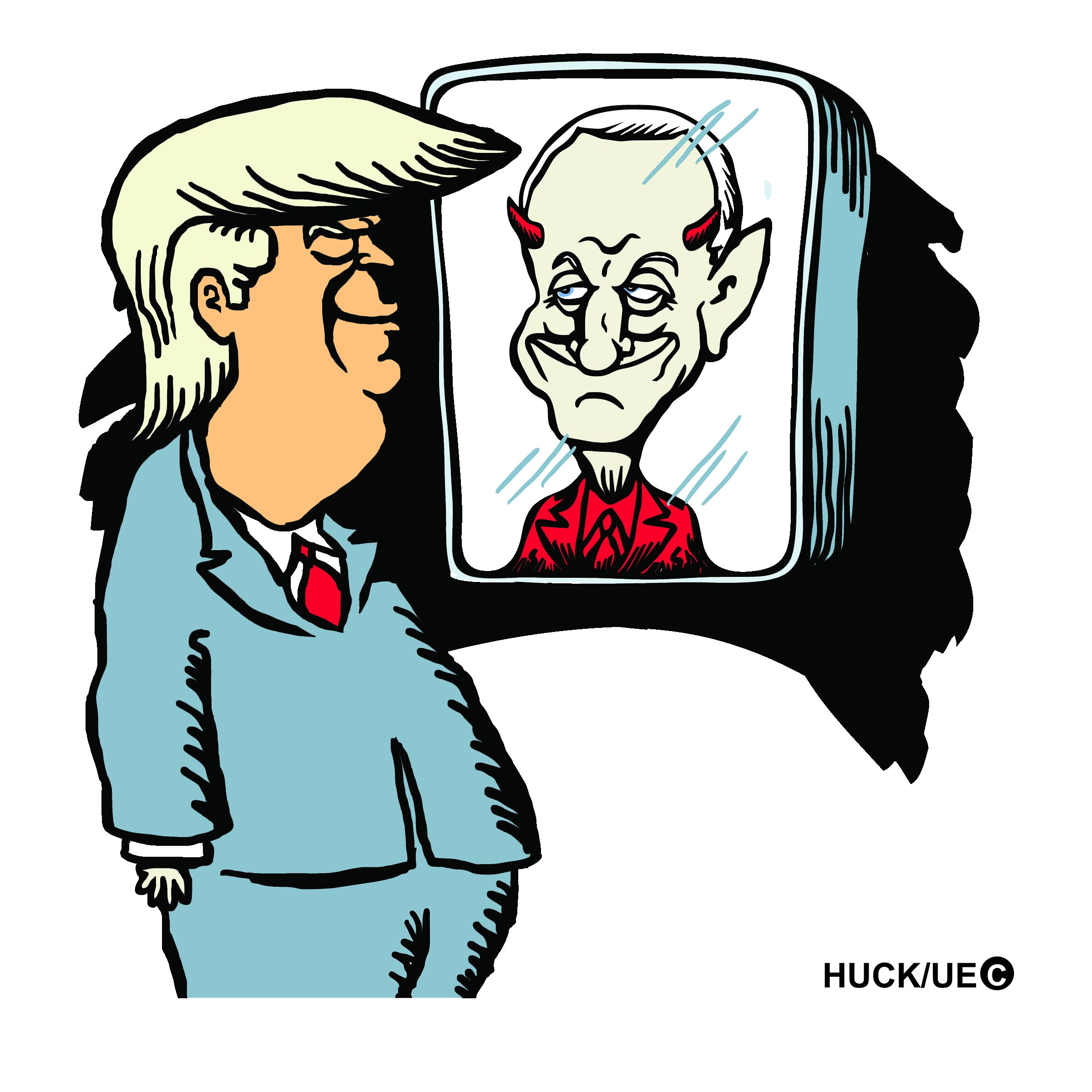 The late Roy Cohn, an unscrupulous New York lawyer and power broker, was Donald Trump’s mentor for 13 years during his rise to celebrity status. Cohn helped shape the Trump we see today, and from him Trump learned his signature tactics of attack; insult; manipulate the media; never back down; never apologize or admit you were wrong; and when you have nothing to attack with, make stuff up. The relationship between Cohn and Trump has been the subject of articles this year in the Washington Post, New York Times, CNN, Politico, New York Daily News and other news media.

Cohn’s own career as an attack dog began in the 1950s, when he rose to prominence as chief counsel to the Senate Permanent Subcommittee on Investigations, chaired by Senator Joseph McCarthy, Republican of Wisconsin. McCarthy built his political career on the witch hunt against Communists, suspected Communists, imagined Communists, and other political nonconformists. He is identified with the paranoia and repression of the 1950s to the extent that the decade is often called the McCarthy Era. McCarthyism became a noun meaning unfair persecution of political opponents.

What is less widely known about Cohn is that to a large degree, he got his start attacking UE, both with and without McCarthy.

The 1950s was a time when UE faced relentless efforts to destroy our union. Following the triumphs of labor in the huge postwar strike wave of 1946 (including a coordinated national strike of UE against GE and Westinghouse, the UAW against GM, and the Steelworkers against the basic steel industry), Big Business counterattacked. Shortly after the conclusion of the big strike, GE CEO Charles Wilson declared that the country’s problems could be summed up as, “Russia abroad, labor at home.” The corporations decided to conflate those two “problems” and attack the labor movement, at least the most militant unions, as disloyal to the United States and servants of the Soviet Union.

Republicans won control of Congress in the November 1946 election by calling the Congress of Industrial Organizations (CIO) a “Communist front.” The CIO was the federation of industrial unions founded in the 1930s which included UE. In 1947 the Republican Congress passed the Taft-Hartley Act, an anti-labor law that weakened unions in many ways and still weakens us today. One provision of Taft-Hartley (struck down years later by the courts) required all union officers to sign sworn affidavits that they were not Communists. If they didn’t sign, their unions would lose all protections of the National Labor Relations Board (NLRB) and not be permitted to appear on any NLRB ballot in a representation election.

All unions opposed Taft-Hartley, and most at first refused to sign the non-Communist affidavits, viewed as unjust government interference in internal union affairs. But one by one unions did sign, and some then took advantage to steal members from unions that still refused to sign, and were therefore barred from NLRB elections.  When other CIO unions raided UE in this manner, UE demanded that the CIO enforce the no-raiding provision in its constitution. CIO President Phil Murray refused, and UE withdrew from the CIO. The CIO then declared UE “expelled” and set up a rival union, the IUE, to raid, destroy and replace UE. (UE officers eventually signed the Taft-Hartley affidavits so the union could survive.)

UE employers – in particular GE and Westinghouse – joined the effort to wipe out UE. As the anti-communist hysteria grew, several congressional committees got into the act. Senators and congresspersons posed as patriotic heroes, ruining the lives of many innocent people in the hunt for reds in government, education, the movie industry, labor and elsewhere.

Joe McCarthy soon emerged as the most ruthless of the witch hunters. Beginning in December 1952 the chief counsel of McCarthy’s committee, and the mastermind behind McCarthy’s tactics, was a brash young lawyer from New York, Roy Cohn.

McCarthy helped rival unions and companies that wanted to eliminate UE by scheduling “field hearings” in cities where UE was facing a raid in a major plant, a few days before the voting. He’d then subpoena UE shop leaders, make accusations, grill them over whether they were Communists or knew any Communists, and the local newspapers would eat it up. Headlines like, “McCarthy Quizzes Union on Red Ties” were often enough, in that fearful atmosphere, to tip an election against UE.

But UE counterattacked. In November 1953 McCarthy was holding hearings in Boston to intimidate UE supporters in the GE plant in nearby Lynn, where an NLRB election between UE and IUE was scheduled. UE send McCarthy a telegram demanding that he subpoena UE Director of Organization James Matles. When McCarthy didn’t respond, UE General Counsel David Scribner phoned Cohn and threatened to tell the press that McCarthy was afraid to question Matles.

Cohn and McCarthy took the bait, and at the hearing Matles turned the tables on them.  Matles called out McCarthy for “terrorizing and browbeating decent working people.” Matles bluntly told McCarthy, “Senator, you’re a liar.” McCarthy blew up. Matles, a World War II vet, also took a shot at the 23-year-old Cohn, who had somehow evaded the Korean War draft. “I put in my time in the Armed Services, Cohn. What are you doing around here?” McCarthy interjected, “You don’t have to answer that, Roy.” (The Matles-McCarthy confrontation is recounted on page 214-216 of Matles’ book on UE history, Them and Us: Struggles of a Rank-and-File Union, available from the UE national office.)

UE’s first run-ins with Cohn, however, came before he went to work for McCarthy, in 1951 and ’52 when he was a special assistant to the U.S. Attorney in New York. In consultation with GE and Westinghouse, Cohn came up with a gambit he hoped would wipe UE off the map in one fell swoop. In 1952, he subpoenaed UE’s General Secretary-Treasurer Julius Empak and Matles before a federal grand jury to grill them over the “truthfulness” of their non-Communist affidavits. (Cohn had done this the year before and gotten nowhere with it.) Cohn still had no legal basis to indict the UE officers for perjury or anything else, but this time he planned to get the grand jury to approve a written document he had drafted, called a “presentment”, which declared that the UE officers’ affidavits were “not worth the paper they were written on” and “a subterfuge.” The “presentment” then recommended that the NLRB “revoke the certification” of UE as a collective bargaining organization.

One day in November 1952 UE received the shocking news that the NLRB was taking Cohn’s scam seriously, and was preparing to, in effect, outlaw the union. The UE leadership quickly alerted the membership to mobilize for a major battle, and UE’s lawyers prepared a full-scale legal fight to reverse the NLRB’s action. Against the odds, the union prevailed in this case, and in late January 1953 a federal judge issued a permanent injunction barring the NLRB from taking any action against UE on the basis of Cohn’s trumped-up “presentment.” (These events were described in detail by the late Arthur Kinoy, a former UE attorney, in his 1983 memoir Rights on Trial: The Odyssey of a People’s Lawyer.)

McCarthy’s overreach led to his downfall. In late 1953 he began investigating the U.S. Army, claiming it was infested with Communist spies. He found nothing to support those wild charges. He and Cohn also pressured the Army to give favorable treatment to David Schine, a former McCarthy aide and friend of Cohn who had been drafted. Army counsel John G. Adams later testified that Cohn had threatened to "wreck the Army" if their demands weren’t met. The Army and the Washington political establishment decided they’d had enough of McCarthy’s and Cohn’s  antics. McCarthy’s committee was placed under the chairmanship of another Republican senator, and what became known as the Army-McCarthy Hearings were televised live. It was McCarthy’s Waterloo, and after the hearings Cohn resigned and returned to New York to set up a private practice. 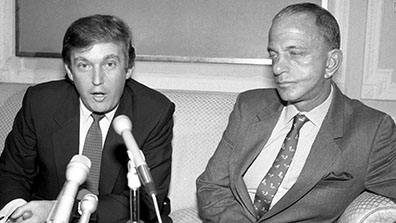 Over the next 30 years Cohn became a New York lawyer with powerful clients, a celebrity in social and political circles, and a man widely hated and feared.  In October 1973 he met a young real estate developer, Donald Trump, at an exclusive Manhattan disco. Trump’s father Fred Trump was a millionaire landlord and developer in Brooklyn and Queens, but Donald wanted to get into the real action, Manhattan. Trump informed Cohn that he and his father were being sued by the U.S. Justice Department for refusing to rent to black tenants, and their lawyers were advising them to settle. “Tell them to go to hell and fight the thing in court,” Cohn responded.

Cohn became the Trumps’ lawyer and filed a $100,000 million countersuit against the government for defaming the Trumps. But in this case Cohn’s bluster didn’t work. The Justice Dept. had solid evidence of discrimination, and Cohn had nothing. The Trumps eventually settled and agreed to make apartments available to minority renters.

But the settlement contained a clause in which the Trumps admitted no wrongdoing, and Trump demonstrated one of the first lessons he had learned from Cohn: He declared victory, and when asked about the case even today he still insists that he won.

Cohn became Trump’s friend and one of his most trusted advisors. Before he married his first wife, Trump took her to lunch with Cohn to present the prenuptial agreement Cohn had drafted. It required that if they split up, Ivana must return everything Trump might give her during the marriage – clothing, jewelry, cars, everything.

In business dealings, Trump used Cohn’s reputation as a slash-and-burn lawyer as a weapon. If a contractor or seller was giving Trump a hard time, he’d pull out an 8-by-10-inch photo of Cohn from his desk drawer and say, “This is my lawyer. Would you rather deal with him?”

Cohn was investigated repeatedly in the 1970s and ‘80s for financial improprieties and professional misconduct, including perjury and jury tampering. In 1986 his ruthlessness finally caught up with him, and the New York courts disbarred him for unethical conduct. Cohn died the following year of AIDS, at age 59.

People who knew both men say that the influence of Cohn on Trump is unmistakable. Peter Fraser, who was Cohn’s lover in the last two years of his life and spent a lot of time with Trump, told the New York Times, “I hear Roy in the things he says quite clearly. That bravado, and if you say it aggressively and loudly enough, it’s the truth – that’s the way Roy used to operate to a degree, and Donald was certainly his apprentice.”