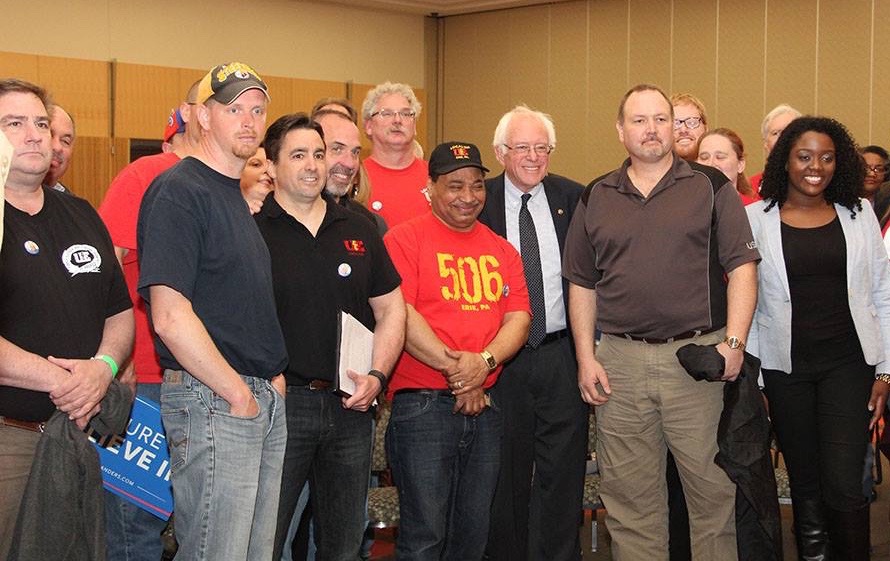 Bernie Sanders in Erie, PA on April 19 with representatives of UE Local 506 and other unions.
April 24, 2016
Pittsburgh

The United, Electrical, Radio and Machine Workers of America (UE), which represents 35,000 private and public sector workers throughout the U.S., has voted to endorse Bernie Sanders for President. The endorsement was approved, without opposition, by rank-and-file local delegates from the union’s three regions (Western, Northeast, and Eastern) over the past six weeks. The Eastern Region local delegates voted to endorse at their meeting today, April 23, after UE Local 506, representing GE workers in Erie PA and UE Local 170 representing West Virginia state workers, had endorsed earlier in the week.

Peter Knowlton, national president of UE, said UE has had a long and rewarding relationship with Sanders, especially through the locals, membership, and retirees in Vermont. “As more of our members around the country have seen and heard Bernie over the past few months, they’ve seen that his policies and priorities match our own. So, there has been a groundswell of support for Bernie with members volunteering for the campaign.”

Knowlton added, “Bernie Sanders is the most pro-worker pro-union presidential candidate I have seen in my lifetime. Electing Bernie Sanders is a unique opportunity that workers and unions must not pass up. We are proud to endorse Bernie Sanders and support his campaign.”