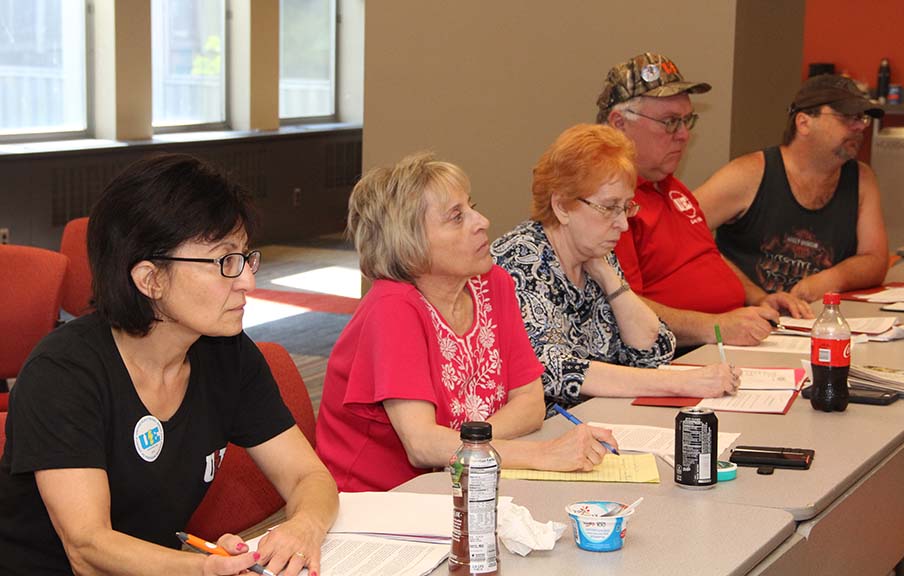 At its meet at UE's national headquarters in late May, the union's General Executive Board adopted a resolution opposing the ongoing coup against the democratic pro-labor government of Brazil.

DEFEND DEMOCRACY AND THE WORKING PEOPLE OF BRAZIL

Statement of the UE General Executive Board

The “impeachment” and May 12 “suspension” from office of Brazilian President Dilma Rousseff by her rivals in the Brazilian congress should be called what it really is: a coup. It is an attempt by the enemies of Rousseff’s party, the Workers’ Party (in Portuguese, Partido dos Trabalhadores or PT) to achieve by other means what they have been unable to accomplish at the ballot box – the removal from power of the country’s working class party.

Ever since PT leader Luis Inácio Lula Da Silva was elected as Brazil’s president in 2002, right-wing corporate forces, including Brazil’s media, have been trying to destroy him and his party. Yet Lula remained extremely popular with Brazil’s working class majority, was reelected in 2008, and in 2010 PT candidate Dilma Rousseff was elected as his successor, Brazil’s first woman president, then re-elected in 2014.

Lula was a factory worker and militant shop floor leader who became one of the founders of the Brazilian metalworkers union (CNM) and the country’s largest labor federation, the Central Unica dos Trabalhadores (CUT.) The PT governments led by Lula and Rousseff made substantial gains in lifting 30 million Brazilians out of poverty, created 15 million jobs, and reindustrializing the country into an economic powerhouse (the fifth largest economy in the world.) Over 13 years in power the PT also reduced child labor, empowered women, raised the minimum wage, increased real wages by 53 percent, reduced unemployment, and provided social security – the Bolsa Familia – for 47 million Brazilians. The PT was only founded in 1980, but supported by the trade union movement, landless peasants, and other working class sectors, it has rapidly to become one of the largest most popular parties in Brazilian history.

This coup was led by some of the most conservative legislative forces in Brazilian society and those in the legislature who spear headed it are themselves under investigation or indictment for their own corruption deals. According to a nonprofit called Transparência Brasil, 60% of Brazil’s federal legislators have been convicted or are under investigation, for crimes ranging from corruption to electoral fraud to assault.

On May 5 the Supreme Federal Tribunal suspended one of the leaders of the impeachment effort, the President of the Chamber of Deputies, Eduardo Cunha, after being found guilty of corruption, money laundering, intimidation and criminal conspiracy. The coup plotters have tried to portray the putsch as intended to save the country from Rousseff’s “corruption” when in fact it is they who have been under investigation

President Rousseff has not been indicted for any crime. She is accused of administrative irregularities in the management of the state budget. Even if proven, the accusation is not grounds for impeachment, which is legally only for “high crimes and misdemeanors”, such as treason.

The real reason for her removal was dramatically revealed on May 23 when the country's largest newspaper, Folha de São Paulo, published leaked transcripts of phone conversations a few weeks before the coup between then-Senator Romero Jucá (later a minister in the coup government) and a former oil executive in which they agree that Rousseff must be removed in order to end the investigation of corruption which threatens them and their cronies. In the conversations Jucá describes a “national pact” in which the Brazilian military, most of the Supreme Court, and other powerful institutions had agreed to back the removal of the elected president.

Upon Rousseff’s removal, Vice President Michel Temer, who is not from the PT but represents a pro-business centrist party (and is himself under investigation for massive corruption) was sworn in as acting president. It has also been revealed that Temer was a U.S. “intelligence asset” – a spy for the U.S. embassy. Polls show that only 2 percent of Brazilians want him to be president, while 60 percent believe he should be impeached. When he took office Temer immediately appointed a new cabinet that is all-white (in a country that is 51 percent non-white) and all-male, reversing the gains of women under the PT. The coup government was immediately recognized by the U.S. and other major Western governments, and began rolling back pro-worker policies of the PT and imposing pro-corporate neo-liberal policies.

Protests against the coup by unions and other workers’ and progressive organizations in Brazil have been growing week by week. On behalf of the members of UE, we express our solidarity with the CUT, other labor organizations, and the people of Brazil in their struggle to restore democracy.