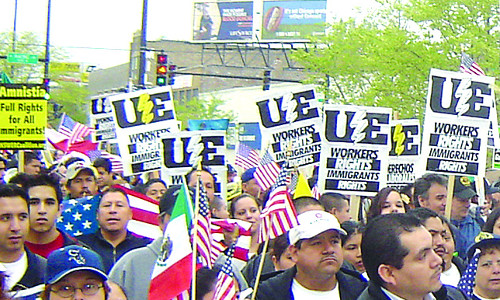 UE stands in full opposition to President Trump’s decision this week to end the Deferred Action for Childhood Arrival (DACA) program, and in solidarity with those taking action to resist it.

The DACA program provides eligible undocumented immigrants who were brought to the U.S. as children — overwhelmingly working-class young people — temporary stay in the U.S., freedom from deportation, and the ability to work legally. It was introduced by President Obama in response to the unwillingness of Congress to pass comprehensive immigration reform. DACA is not a comprehensive solution to the problems in our immigration system, but to repeal it will do lasting harm to many young people in our country and to our economic stability.

Beginning March 6, 2018, more than 800,000 young people who currently work and study and contribute to our nation will lose their DACA status, which means losing their jobs and their ability to work, drive, buy a home, or even open a bank account. Each day after that for the next 20 months more than 1,000 people will face that fate.

Many of the young people with DACA status are union members, and many more are the family of union members. Members of many UE locals have family members who will be harmed by the end of DACA. This is not just an attack on immigrant youth, but an attack on the labor movement and all working people.

Losing their protected status means that even more immigrants will be pushed into the shadows where they will be forced to work at lower wages, undercutting the wages and benefits of all working people. Combined with eliminating their ability to get mortgages and buy homes, this will likely drive down economic growth in the country and increase the likelihood of a recession.

As the resolution on immigrant rights passed unanimously by UE members in our 75th convention states:

“Immigrants have played a central role in our union since its inception. Employers and the politicians that represent them have always sought to exploit divisions between immigrant and U.S.-born workers, driving down wages and stripping away hard-won workers’ rights. Denying immigrant workers decent wages and conditions undermines the wages and conditions of all.

“All workers, regardless of immigration status, must have the right to form unions, to file complaints against unfair treatment without fear of reprisal, to receive unemployment, disability and workers’ compensation benefits, and to have access for themselves and their families to affordable housing, healthcare, education, and transportation.

“Trump’s actions and rhetoric have emboldened the most racist elements on the American right, and have increased fears of violence against immigrants. All of this needs to be resisted by the members of our union.”

Austerity, military intervention, and climate change — all the products of the pursuit of corporate profit — increasingly force working people around the world to leave their homes and relocate in order to survive. UE is committed to working with other labor, faith, and community groups to defend DACA, and to fight for legalization and against anti-immigrant laws and sentiment.