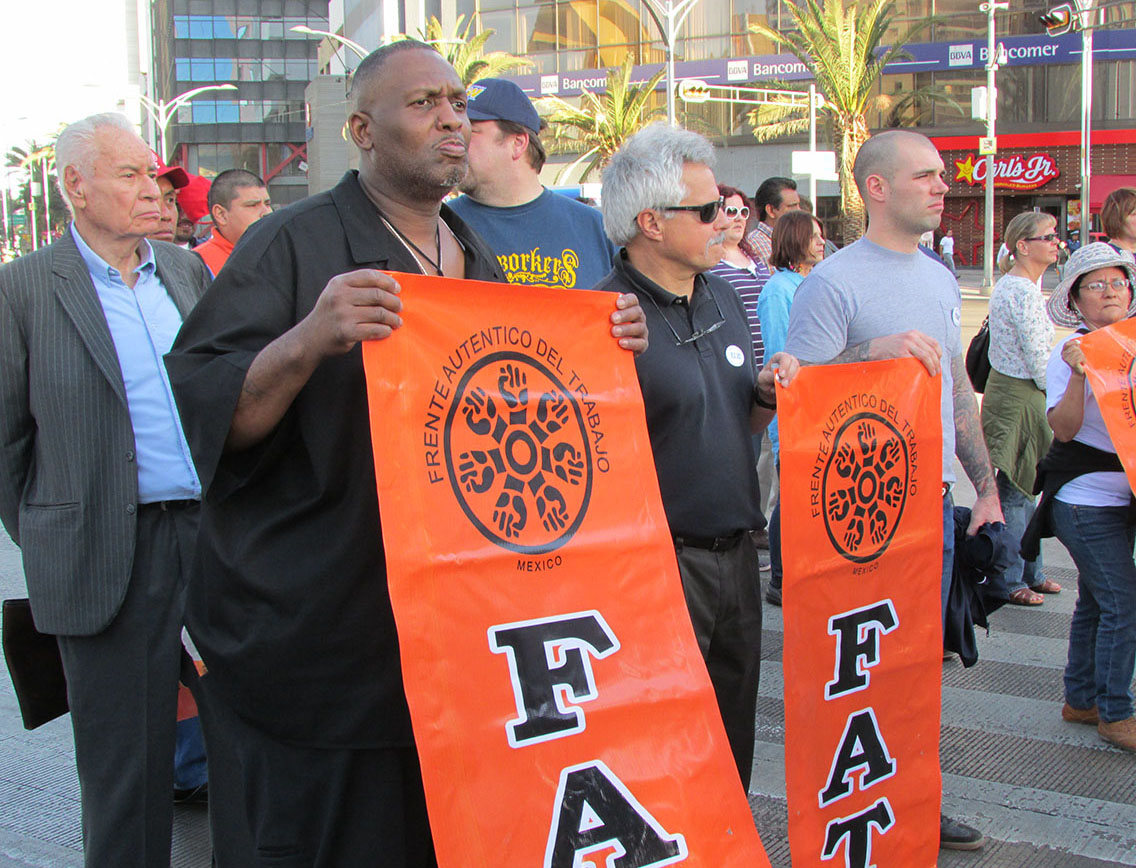 A UE solidarity delegation marches in Mexico City with the FAT and the Mexican Miners Union, 2013. In the foreground are James Hill, Local 1177, and former Director of Organization Bob Kingsley.
June 6, 2017
Pittsburgh

At its quarterly meeting the UE General Executive Board adopted the following statement on the Trump administration's plans to renegotiate NAFTA.

Three years ago, on the 20th anniversary of NAFTA’s passage, North American labor, environmental groups, human rights organizations, and other citizen watchdogs—united to call out the terrible impact of this trade agreement on working people and our communities. As attention returns to NAFTA, now that President Trump has notified Congress officially of his intention to renegotiate, we caution against any belief that his administration will seek a deal benefitting people and the planet. NAFTA benefits corporations and those who have an interest in the free flow of capital, rather than improving the lives of workers, our communities, or the environment. Past attempts to appease concerns from labor and environmentalists have not been meaningful. .

We see the consequences of this failed treaty vividly: Across the continent, workers and families have been hit hard, as evidenced by persistent unemployment, wage stagnation, and record wealth and income inequality. There continues to be a decline in good-paying, union manufacturing jobs, as well as a loss of high-paying jobs in smaller businesses.  In those pockets where manufacturing has expanded, the jobs created have been mostly low wage with little attention to worker health and safety. In Mexico, the jobs that have emerged have been at such low rates of pay that poverty rates have risen—not fallen—since 1994. Mexico has experienced a loss of jobs in agriculture, where heavily-subsidized US corn, sugar, and other commodities led to the collapse of the Mexican farm economy.  Since the implementation of NAFTA, workers in the three countries have suffered, while wealthy investors and big corporations have seen their profits balloon.

Communities of North America continue to suffer under NAFTA as corporations continue to exploit our shared environment for profit and pollute our land, air, and water as governments are unable or unwilling to force corporations to clean up hazardous mistakes created by negligence. This is evident from the St. Lawrence River in Québec, which is threatened by fracking from Lone Pine Resources, to the Midwestern plains, where oil leaks from the TransCanada-owned Keystone Pipeline, to the hills of Guadalcázar, where residents pray they have seen the last child born with birth defects from the toxic waste MetalClad has refused to clean up. Corporate profits continue to grow while the health of our communities and environment suffers.

NAFTA enables the unrestricted flow of capital causing misery for working people, including: the forced migration of people looking for jobs; increased rates of homelessness; mental health problems associated with dislocation; higher rates of diabetes and other ailments linked to cheap high fructose corn syrup; and rising violence, particularly against women. NAFTA devastated the Mexican economy, particularly agriculture and family farms by allowing US corporations to dump cheap corn and other staples into Mexico. It is a key reason why millions upon millions of Mexican workers have been forced to migrate north to the US looking for better work.

President Trump says he wants to renegotiate this “bad deal,” but his vague plans are anchored in building a wall for workers and tearing down walls for capital. He makes a xenophobic argument for renegotiation, and we reject its racist and nationalistic orientation. Commerce Secretary Wilbur Ross and Agriculture Secretary Sonny Perdue have stated that the rejected and discredited Trans Pacific Partnership (TPP) would be the starting point for a renegotiated NAFTA. Unionists and environmentalists rejected TPP for good reasons and to have that as the administration’s starting point is very troubling.

The Investor-State Dispute Settlement (ISDS) mechanism in NAFTA infringes on sovereignty and citizens’ rights to self-governance by allowing corporations to sue governments who restrain profit-making opportunities. This would have been made more powerful under TPP. TPP would have weakened US health and safety standards, including those that ensure safe pharmaceuticals and food. TPP attacked net neutrality and a free and open Internet. NAFTA was negotiated in the early 1990’s and the internet was not included in the original NAFTA. We expect this to be a major target of the administration’s renegotiation.

We reject the corporate-led vision for a renegotiation of NAFTA and call for a new set of trade policies that prioritize workers common interests and relies on international solidarity as its cornerstone. Any renegotiation of NAFTA must be oriented around the improvement of workers’ lives and protection of the environment focused on those regions of the continent where conditions are the most desperate.

We call for the end of the ISDS protections NAFTA offers to  corporations to exploit working people and the environment.  As we said three years ago, 20 years after the passage of NAFTA, any new treaty must “strengthen governments’ ability to protect social, environmental and labor rights, particularly for migrants.”

We demand, as required by the UN International Labor Organization (ILO) conventions 87 and 98, an end to laws that allow employers to prevent workers from choosing their own unions or from exercising their rights to assemble, organize, and represent workers without any employer interference. This includes an end to attacks in the U.S against unions seeking to negotiate union security clauses with employers.

We demand government investment to create good-paying jobs in our communities, to build affordable housing, accessible public transportation, and green energy production, with quality food, education, and healthcare for all, and with improved access to clean air and water, public parks, and green recreation spaces. All trade negotiations must be opened to civil society participation, which includes prior publication of the texts and the construction of mechanisms for information sharing, social participation and deliberation, while avoiding the imposition of any “fast track”. A renegotiated NAFTA treaty must include effective mechanisms to protect human, labor, and environmental rights with meaningful sanctions and enforcement provisions to assure the supremacy of human rights over corporate privilege.

We support the “Political Declaration of the Encounter of the Social Organizations of Canada, United States, and Mexico” which came out of meetings held in Mexico City on May 26 and 27, 2017. We unite in international solidarity with these goals in mind and are prepared to fight back against any and all attempts to divide or devalue our work, our communities, and our environment.