No Tax Cuts for Billionaires, Invest in Working People Instead 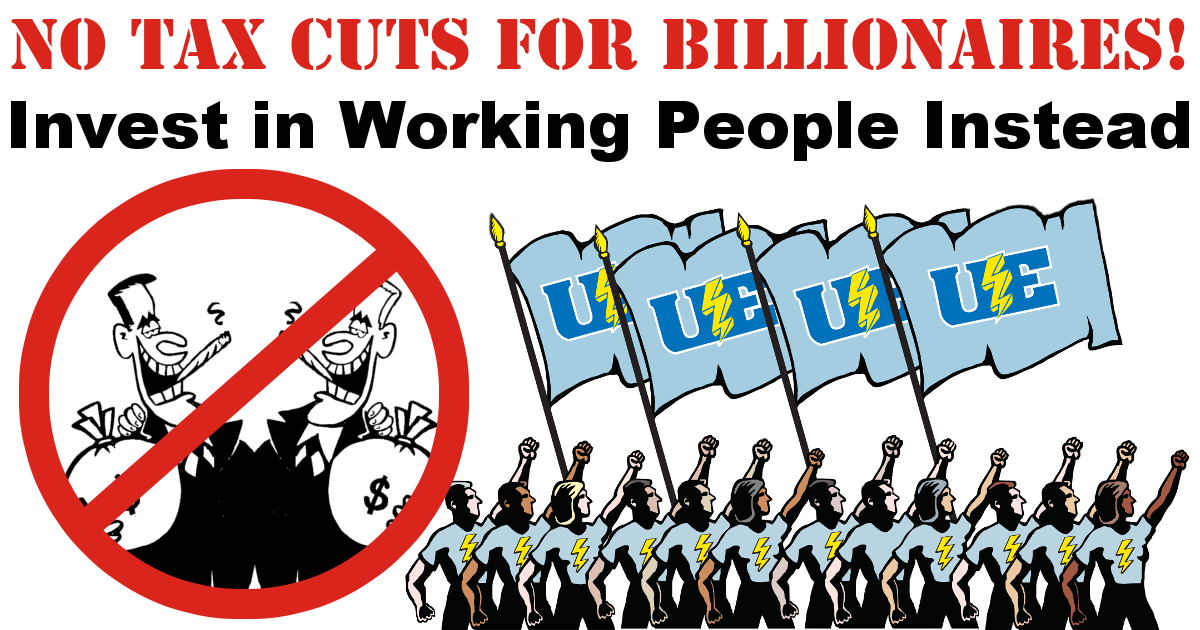 Last Thursday, House Speaker Paul Ryan unveiled the misnamed “Tax Cuts and Jobs Act.” As expected, this plan is a massive tax giveaway to the billionaires and corporations who fund the campaigns of politicians like Ryan. It will not cut taxes for working people, nor will it create jobs.

At a time of record corporate profits, the bill would permanently lower the corporate tax rate from 35 percent to 20 percent. The bill also introduces structural changes into the federal tax code, such as changing the way so-called “pass-through” income is taxed, which overwhelmingly benefit the wealthy and which, if passed, will be harder to undo than rate cuts. And the budget framework adopted by the Republican Senate “pays” for this tax cut by cutting Medicare and Medicaid.

This bill also contains specific threats to workers in manufacturing, state and local government, and higher education — sectors of the economy in which many UE members work:

It threatens our members who work in manufacturing by creating incentives to outsource work that will only intensify the destruction of good, union jobs.

It threatens our members who work for colleges and universities — especially graduate employees — by taxing tuition remission as income.

This bill is, quite simply, an attempt by super-wealthy campaign donors like the Koch brothers to “cash in” at the public’s expense.

If the Republican majority is willing to consider spending $1.5 trillion, it would be far better spent on massive investment in infrastructure, which — unlike corporate tax cuts — would actually create jobs. According to the Congressional Budget Office, the purchase of goods and services by the federal government would raise gross domestic product by as much as $2.50 for every $1 spent, while federal grants to state and local government for infrastructure could create as much as $2.20 for every $1 spent. Each dollar spent on tax cuts for the wealthy and corporations, by contrast, generates only 60 and 40 cents respectively.

UE supports budget and tax strategies which benefits workers, our families, and our communities – like the Congressional Progressive Caucus’s 2018 People’s Budget. Those are tax and investment strategies working people can get behind.

This spring and summer, working people defeated attempts to repeal the Affordable Care Act, and that mobilization reinvigorated the movement for a Medicare for All, single-payer healthcare system. We can do the same thing with taxes and the budget. Defeating the Ryan plan can be the first step towards winning the investment in infrastructure that our country desperately needs. Let’s get to work.