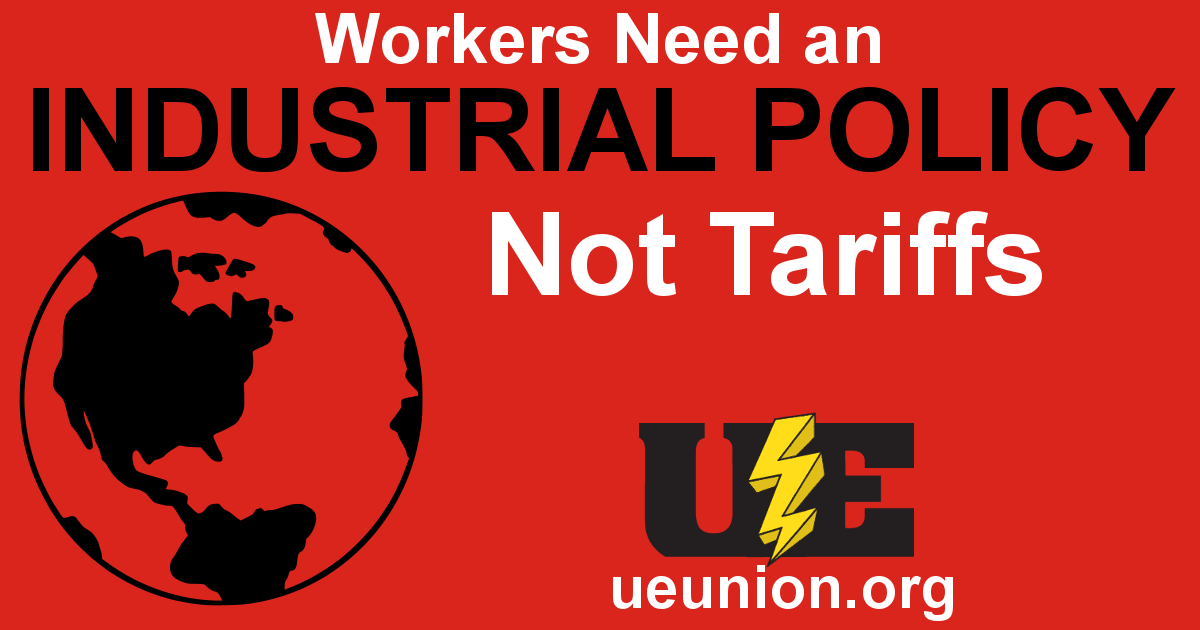 Meeting in Chicago on Friday, March 9, the UE General Executive Board issued the following statement on President Trump's announcement about steel and aluminum tariffs.

President Trump’s recent announcement that he intends to impose a 25% tariff on steel and a 10% tariff on aluminum is not a new or effective strategy for reviving American manufacturing. George W. Bush imposed tariffs on steel in 2002 and quietly removed them after only 18 months. Protectionist measures in a capitalist economy of global “free” trade are not adequate tools for building a sustainable US infrastructure and improving the lives of workers.

What American workers need is not partial half-measures, but a trade and industrial policy that is based on international cooperation, respect for workers’ rights, and environmental sustainability — one that raises living standards for workers across industries and across borders through investment in infrastructure, jobs and social programs.

It is troubling that there are “progressive” voices and organizations that are falling into the Trumpian trap of using trade as a tool to divide the working class on all sides of our borders. Instead of pursuing industrial policies that raise wages and working conditions for workers across industries and across borders, these tariffs are simply an effort to secure the best possible deal for one sector of business. They will only have the effect of whipsawing U.S. steel and aluminum workers against other U.S. manufacturing workers whose industries are dependent on steel and aluminum imports, and against steel and aluminum workers in other countries.

Corporate executives regularly hide behind notions of “market forces” or “economic efficiency” as they make calculated decisions to destroy workers’ living standards and rip industries from US, Canadian and Mexican communities in their search for cheaper wages and worse environmental standards. We have heard it thousands of times in union contract negotiations. However, it is not just “markets” or “economics.” Trade deals and tariffs have real impacts on human beings and our ability to make a life for ourselves and our families. To treat our relations with other nations, especially those nations that are some of our closest allies, as a business deal speaks volumes about our government’s view of its relationship with other countries and their lack of concern for workers.

Most troubling about the President’s executive order is his threat to Canada and Mexico that their “exemption” is conditional on the positions they take during the NAFTA negotiations. Canada has made demands in the negotiations to improve labor rights and conditions in both Mexico and the US, to level the playing field between our three nations and blunt the ability of corporations and their allies to exploit workers and communities. We are concerned that the basis of the President’s threats is to enforce the continued use of NAFTA as a tool for corporate greed and exploitation.

As has been widely reported in the press, the Trump administration imposed these tariffs under World Trade Organization rules by claiming they are for “national security” purposes. This is a false claim. In fact, Secretary of Defense James Mattis challenged that premise in a “Memorandum for Secretary of Commerce” by stating, “As noted in both Section 232 reports, however, the US military requirements for steel and aluminum each only represent about three percent of U.S. production. Therefore, DoD does not believe that the finding in the reports impact the ability of DoD programs to acquire the steel or aluminum necessary to meet national defense requirements.” (Section 232 of the Trade Expansion Act of 1962 gives executive branch the ability to conduct investigations to “determine the effects on the national security of imports”.)

As Senator Sanders consistently repeated during his presidential campaign, the greatest threat to our national security is global climate change. Investing in infrastructure and transitioning from fossil fuels to renewable energy would not only improve our national security but could create millions of sustainable and good-paying union jobs. We could transform our nation into one where our air and water are clean, our cities livable, our education system top-notch, and workers and residents have the same affordable access to healthcare, housing, and food regardless of income.

We are not opposed to tariffs or trade agreements in all circumstances. Countries use them all the time to protect key segments of their economy and ensure employment in those sectors. However, we firmly oppose using them as a cudgel to extract concessions from trading partners and allies, and to bolster corporate profits at the expense of workers’ living standards and the health and safety of our communities.